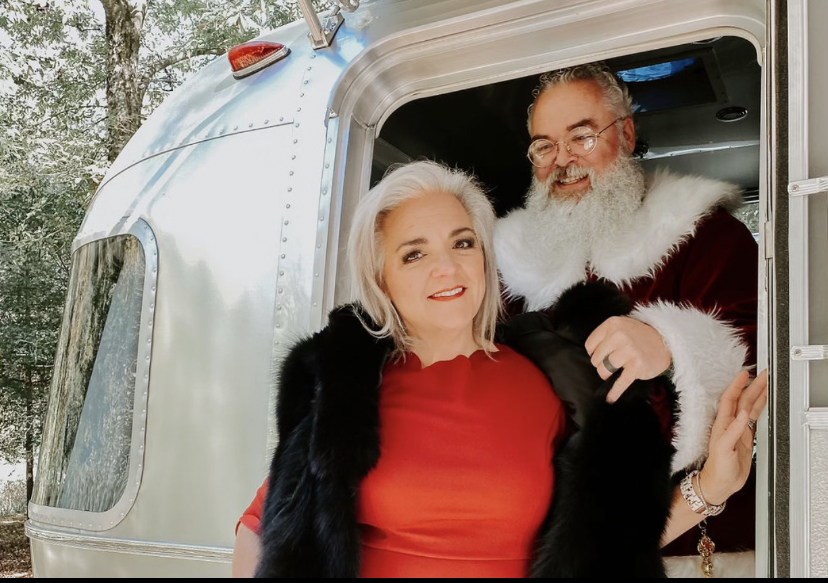 Kent and Camille Breckenridge report that Santa and Mrs. Claus will make a special appearance in Water Valley Friday. They will ride in the Christmas parade and then head over to BizzyBody Nutrition on North Main Street for photos with children. The photo session is sponsored by the Water Valley Junior Auxiliary and parents can bring their phone or camera to capture the moment.

NORTH POLE – Spread the word, Santa and Mrs. Claus have a special trip planned to Water Valley as part of the Christmas in the Valley activities Friday night, and all area kids are invited to have their picture made with them.

Santa confirmed that the elves are logging long hours preparing for the big day, but with the top notch team the couple still have time to check in on the children.

“We urge everybody to continue to be good, help each other and share some love,” Santa’s spokesperson, Kent Breckenridge told the Herald. Kent and his wife, Camille Breckenbridge, grew up in Water Valley and share a passion to make sure all of the boys and girls in town are able to experience the magic of the season with Mr. and Mrs. Claus.

“Water Valley has always been a special place, it was a great place to grow up and has a large group of true believers,” Kent explained.

Kent reported that gift lists for boys this year include some timeless classics along with the latest electronics such as a Nintendo Switch. For girls the L.O.L. dolls remain popular, along with Barbie dolls and even hover boards. He cautioned kids with Christmas lists that include big and expensive gifts require parent approval before Santa loads his sled.

“Santa has to make sure there is enough room and things like that. He had a kid who lives close to Water Valley who wanted a real Clydesdale horse,” Kent explained.

Kent also reported that there is still time for boys and girls who may be on Santa’s naughty list to still enjoy the magical season.

“There is always time to pull it off at the 11th hour, Santa and Mrs. Claus believe in love, sharing and forgiving,” Kent told the Herald. He included tips that Santa is sure to notice.

“Random acts of kindness are always a favorite. Do something nice for somebody, maybe a person standing in line at a store,” he recommended. “You can reverse a lot of stuff by getting in the spirit.”

Kent and Camille keep a busy schedule helping Santa during the holiday season. After taking a short break for Thanksgiving, they returned to Bowling Green, Ky. to help at the reindeer farm. From there the next stops included New Orleans, Baton Rouge, and other areas of Louisiana before heading back north to the Valley for the magical night.

The couple, who were childhood friends, recently celebrated their 11th anniversary after reconnecting through the wonders of Facebook in 2010.

“We started talking everyday,” Kent recalled about a friendship that was rekindled. “We were still just like best buddies.”