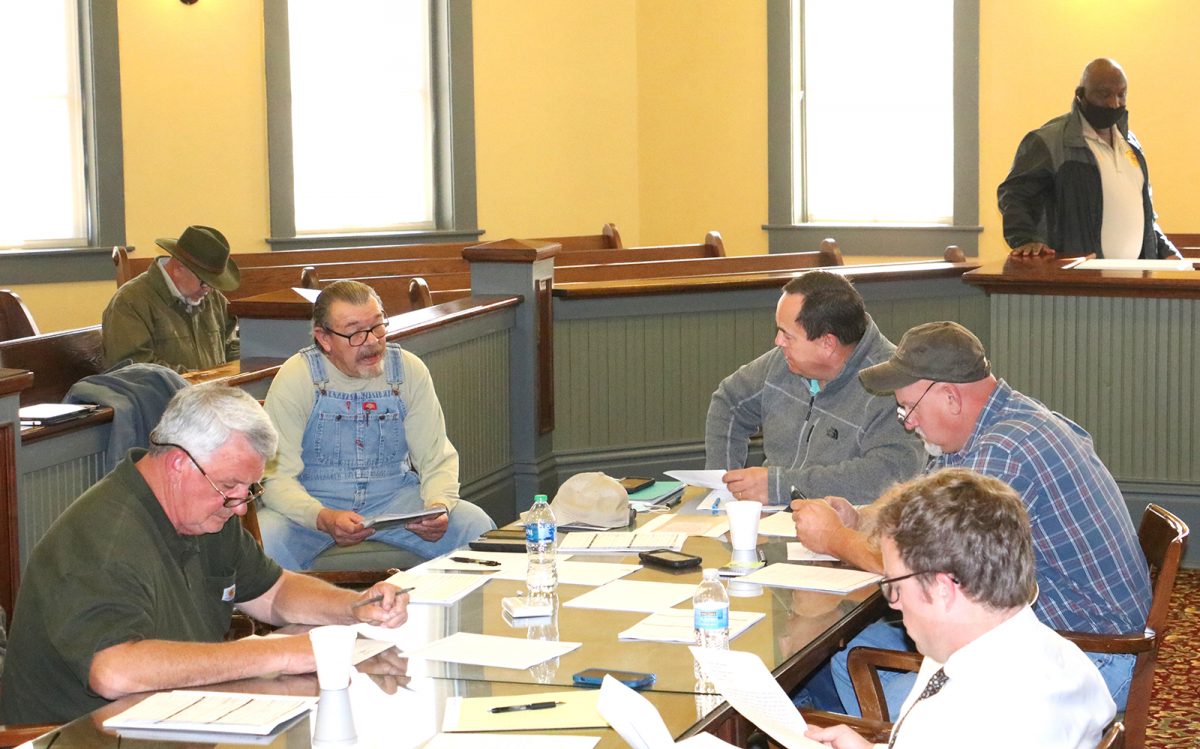 COFFEEVILLE – The consensus came early in Monday’s Board of Supervisor meeting that turned into more of a work session dealing with the county’s ordinance regulating ownership of dangerous and potentially dangerous dogs. The catalyst was a vicious dog issue on County Road 224, a reoccurring issue that spans years and has frustrated neighbors (see related story, page 12).

“I am telling  you what I think and then y’all can talk about it until Jesus comes back,” District 3 Supervisor Ken Harmon explained about mid-way through the think session.

“They need to put the dogs up,” he stated.

“Amen,” was the resounding answer from other supervisors.

“They need to build a sufficient fence,” Harmon said, which was followed by another resounding amen.

“They need to have so long to get the dogs if they get out, and it needs to cost them. And the third strike you are out,” Harmon continued to a final hearty round of agreement.

The supervisor’s recommendation to follow a tiered approach for imposing penalties is already defined in the county’s ordinance, which includes a fine of up to $200 and/or 10 days in jail for conviction of the first offense in justice court. The fine amount and jail time increase for the second and third offenses. The ordinance also states that second and third offenses include removal of the dog from the jurisdiction of Yalobusha County.   Although the ordinance does not specify exactly what removal of the dog from the county means, presumably the dog would be euthanized. That was Harmon’s reference to the third strike and, “you are out.”

The ordinance is designed to keep dangerous or potentially dogs from running at-large. Once a dog is labeled as such, which typically follows an attack or attempted attack, the dog must be restrained in a suitable pen. The dog must also be registered with the sheriff’s department.

Sounds simple, but the devil is always in the details and there were plenty of what-ifs in the two hour discussion that focused on legal and practical issues of application following nine years of sporadic enforcement of the ordinance. The takeaway from the discussion is that the ordinance itself will remain unchanged, at least for now, and instead the focus will be on the tools needed for the enforcement. This includes operating a shelter for housing dogs picked up in accordance with the ordinance, identifying whether the sheriff’s department or potentially a contract dog catcher will be utilized to catch a vicious dog, and ensuring violators are prosecuted in justice court.

The discussion about a potential shelter for the county’s use consumed the least amount of time in Monday’s meeting. Supervisors were in agreement that they would reach out to the City of Water Valley to see if the former city shelter could be used. The shelter was used recently when five dogs were picked up from County Road 224. The logistics were still up in the air, as Washington explained that he provided the food for the dogs daily until they were returned to their owners. Suggestions included using inmate labor or a self- feeder.

The sheriff’s department is in charge of enforcing the ordinance, but Gooch has noted that both the time and expertise is a problem. An example cited during the meeting was that at least one of the dogs on County Road 224 would run as soon as they pulled up, making it difficult to catch. A deputy could spend hours trying to enforce the ordinance, making frequent return tips. Options discussed included the possibility of hiring a part-time dog catcher.

Probably the most important part of the conversation was the prosecution, ensuring that the violator lands in justice court. Board Attorney Shannon Crow explained that in order for the ordinance to work, especially with multiple offenses, the violator must be convicted in justice court. This would allow the fines and/or jail time to be imposed, and ultimately could lead to the dog being removed from the county with subsequent offenses.

One glitch was handled during Monday’s meeting as Gooch noted that his department did not have the proper paperwork to charge an offender in justice court. The sheriff explained he needed the paperwork to get the process started. Crow committed to getting the sheriff the necessary paperwork by the end of the day.

“For any punishment to be imposed, it is going to have to be by a judge,” Crow explained.