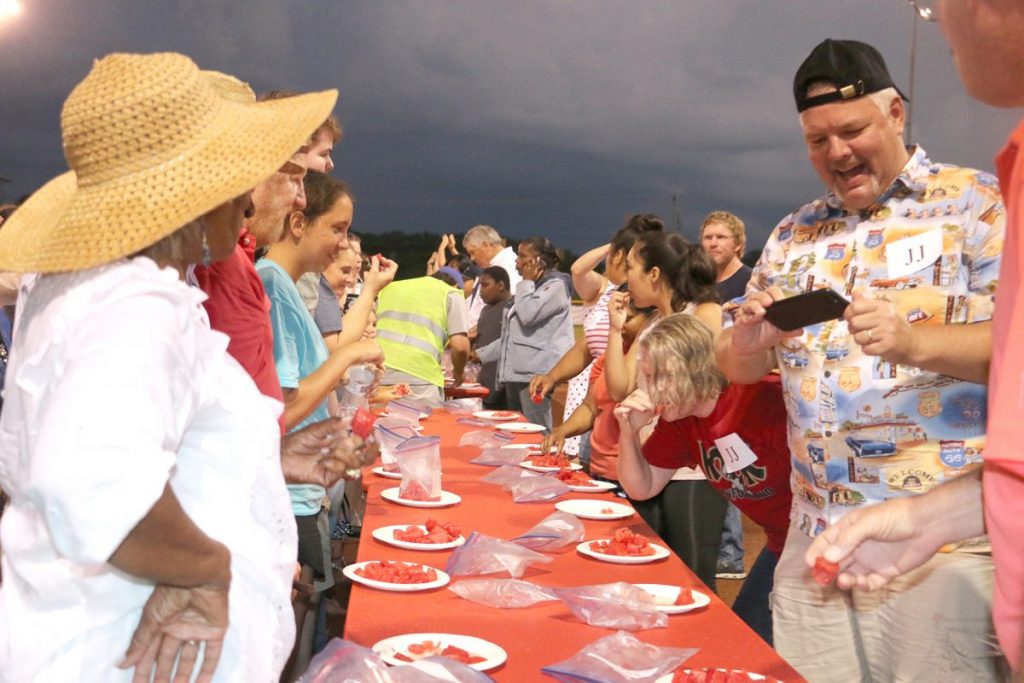 The 2019 Watermelon Carnival World Record Watermelon Eating Contest brought the entire community together to celebrate Water Valley’s rich watermelon history. Tonya Eubanks came up with the idea and enlisted the help of dozens of volunteers for the event.

The success of the Water Valley Area Chamber of Commerce’s annual Watermelon Carnival comes from scores of volunteers who pitch in each year. One of the volunteers with the most longevity and enthusiasm is Tonya Eubanks.

Her earliest memories of the carnival date back to when she was a child attending the event with her parents, Earl and Terry McMinn. Tonya’s official involvement spans almost a quarter-century, starting as a Junior Auxiliary member in 1998. At that time the JA was responsible for coordinating the vendor booths at the carnival. Next she served on the Chamber, including two terms as chairman of the board of directors – in 2011 and 2015. She has also served as Chamber treasurer, secretary, and vice-president. Most of the positions were held multiple times, including her current position as vice-president.

“When I became chairman, it was a goal to have 200 vendors,” Tonya recalled. That year the Chamber closed off the road on the west side of the park to accommodate the extra vendors and met the goal.

In 2010, Tonya decided that the carnival needed a little boost.

“I learned in Junior Auxiliary that for an event to be successful, you should always add to it or it will get boring,” Tonya explained.

Realizing that the Chamber volunteers had the logistics of the annual carnival down pat, she had an idea about adding a barbecue cooking contest to the lineup. Tonya took the idea to the 12-person Chamber board and had it blessed. The chamber volunteers were stretched with existing carnival events, and Tonya would need additional volunteers for the inaugural barbecue contest. The Chamber also said the budget would be limited for the new event. 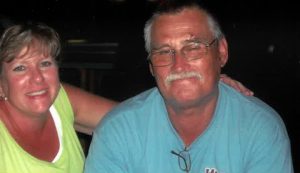 Tonya Eubanks has enjoyed attending the Watermelon Carnival with her parents, Earl (right) and Terry McMinn, since she was a child.

“I raised money from sponsors, until that point we didn’t have sponsors for any of the events in the Watermelon Carnival,” Tonya added.

Tonya also decided to reach out to the Memphis Barbecue Network (MBN) and even attended their contests.

“I learned a lot from MBN,” she added.

She wanted Water Valley people to be involved, envisioning a Mayberry theme with pies and jellies.

But what did work was an all-out cooking contest as top ranked teams from across the southeast would roll into town to compete in the MBN-sanctioned event. That first year there were seven teams. Last year Tonya reported there were 33 teams.

“These big teams come, I have the number one rib team from the Memphis in May come to our event every year. A lot of big name teams,” Tonya explained.

What she didn’t realize was the carnival atmosphere would make the annual Train Tracks Pork Attack a favorite for these professional cooking teams.

Equally important, the contest brings people to the city for the carnival weekend who experience a taste of the hospitality in Water Valley.

“People learn about Water Valley who have never been here before,” she explained.

And when a Taster’s Choice category was added the to Train Tracks Pork Attack, carnival-goers an opportunity for a taste too, samples of some of the best food in the South.

“The Taster’s Choice is something no other contest offers. I came up with that on my own,” Tonya explained.

“Other barbecue contests had something similar, but I didn’t understand what was going on. So I just made up my own rules.”

She made it simple, 100 tickets are sold in the community. Each person who purchases a $10 ticket receives a sample from each team competing in the Taster’s Choice category. Each ticket holder then votes for their favorite plate, and the first place team wins $1,500 and second place team wins $500.

Tonya’s ability to secure sponsors year after year boosts the prize money to thousands of dollars for competitors. In addition to the cash prizes for Taster’s Choice winners, there is big money for winners in the MBN sanctioned categories. Even the smaller categories that include Best Dessert, Best Sauce, Best Side and Best Anything Watermelon have a nice cash prize for winners. These entries are among Tonya’s favorites, and she has seen some strong local talent. She recalls watermelon smoothies entered by Layla Hill in 2015 that were top-notch. Monk Morris first entered the contest in 2016 with his watermelon salsa, earning a second place finish. Monk was back in 2018 with watermelon punch and again in 2019. Amy Joyner won Best Sides with bacon-wrapped watermelons in 2017.

“I have learned there is a lot you can do with a watermelon,” Tonya said.

Her duties during each carnival aren’t limited to the barbecue contest. She still maps out the park each year for the vendor spots, expertise that stems from her JA days. The knowledge is important, if the spots aren’t lined up just right, there may not be enough booth spaces. Dealing with vendors can be challenging, as one requirement is 85 percent of the items in a booth must be handmade.

“We do have a lot of vendors who have been grandfathered in, which means they have been coming for 20 years,” Tonya explained about the rule.

But for new vendors, this requirement is important. Other frustration comes from vendors who may not like their spot in the park. Whatever the problem, Tonya has often been the person they find to complain.

“I have been cussed, I had one lady cuss me Friday night and come back Saturday and apologize,” she said.

“It’s hard, because you can’t please everybody.”

Just as in the barbecue contest and other duties she is involved with, Tonya points to a strong volunteer base in Water Valley as the catalyst that made the record setting event possible. Dozens and dozens of volunteers signed up to help for the contest scheduled as the final event of the 2019 carnival. The effort also took months of preparation and long hours for many people in the community. But in the end it was worthwhile – Water Valley and the Watermelon Carnival was recorded in history with the Guinness World Record with 745 participants.

“That whole weekend was an awesome carnival – from the Street Dance to the carnival, to the vendors to the barbecue contest. It was a lot of fun,” Tonya added. “I enjoy it, I really do.” 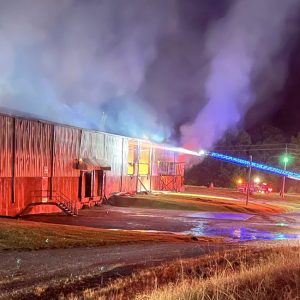 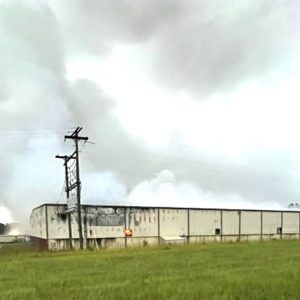 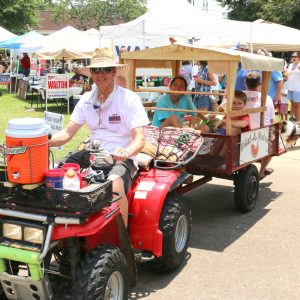 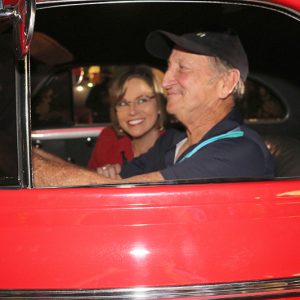 The Valley’s Signature Event Is This Weekend