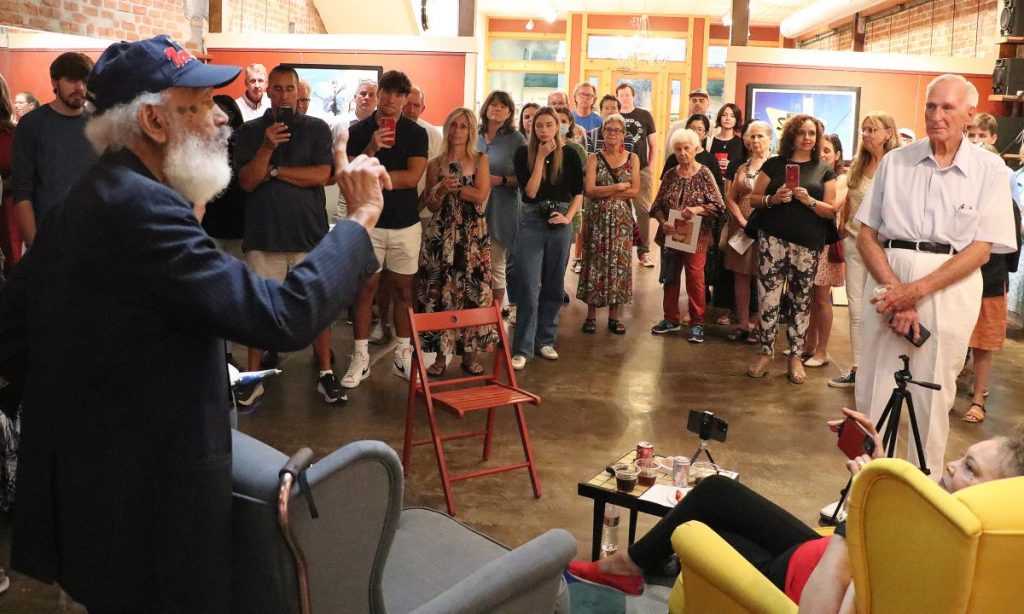 Sixty years have passed since James Meredith became the first African American to enroll at the University of Mississippi. His admission triggered several days of racial violence before being quelled by some 3,000 U.S. troops. Meredith spoke in Water Valley Saturday night, reflecting about progress since then and the journey ahead for equality. His comments came during the opening of a photography show exploring his life.

WATER VALLEY – Saturday night’s opening for a photography show exploring the life of James Meredith was the setting for remarks from the Civil Rights activist on the eve of the 60th anniversary of his enrollment at the University of Mississippi. Meredith was the first African-American to attend the racially segregated school in the fall of 1962, a pivotal point in the civil rights movement in the country.

Wearing his “New Miss, I’m Still Here” ballcap and T-shirt, Meredith spoke about progress during the last six decades as well as continued work ahead for equality.
“Ole Miss has been publicizing now for three months that they are going to celebrate 60 years of integration. Now they say they love it, but for 50 years they said it never occurred. I don’t care if it is the truth or a lie,” Meredith shared.

The photography show, titled “I’m Still Here: Documenting James Meredith,” opened at Bozarts Gallery on Main Street during the Art Crawl. The show features original portraits and photographs by photographer and activist Susi Altman exploring the life of Meredith for the last 21 years. The images are the result of a friendship between the photographer and the civil rights activist and include 60 shots.

“I have never shown this many images of him,” Altman said during Saturday’s opening. Her pictures show Meredith at historic events and places during the last two decades ranging from a visit to George Floyd Memorial Square in Minneapolis, Minn. to the bullet-ridden Emmett Till sign in Tallahatchie County.

Meredith told the crowd there are two things he promised God he is going to do if he remains living – build a James Meredith Museum and James Meredith Bible society mission headquarters in Jackson, Mississippi.

“The purpose is to document this progress from the worst to the best day that has happened since 1962 when I went to that university,” Meredith continued. “The mission is to raise the moral character of Mississippi as an example for the world. I think if Mississippi does it, the whole world will follow.”

Meredith also asked for financial support for the museum.

“Every county that I go to, and this is the first, I am looking for one person for every 100 people in that county to promise to give $100 to the Meredith Fund for a historical museum and mission headquarters,” Meredith continued.

Meredith previously explained that the museum will incorporate photographs, speeches, his 28 books and a research library. The building is estimated to cost between $8 million and $10 million, fundraising that will come in part from visiting counties across the state.