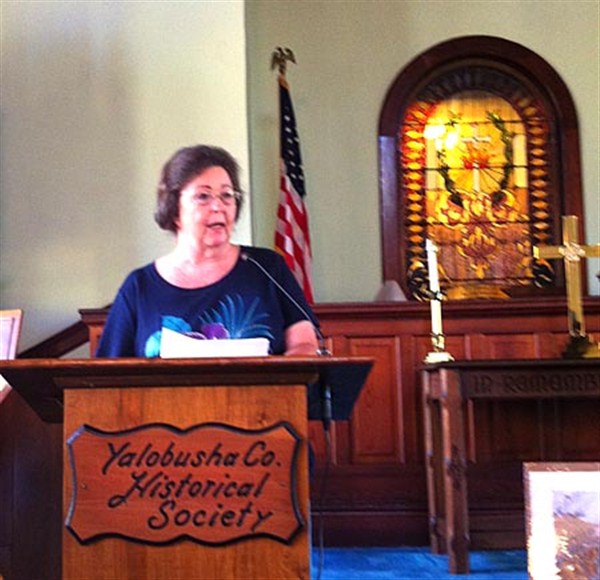 Kay McCulley of Water Valley talked to the thirty six attendees of the August Yalobusha Historical Society meeting about the Battle of Franklin.
Kay’s comments:
My interest in the Battle of Franklin began when I read in the Yalobusha County History that several men of the Water Valley Rifles were killed at that battle.  Col. M. D. L.  Stevens wrote of his experiences there.  While reading the History of the Blackhawk Rifles, Co. G, 22 MS Inf., I saw a reference to several of their unit being killed at the same battle.  I toured the Carter house that was in the thick of the battle.  I toured the Carnton Plantation house that was used as a hospital.  I went alone, when the houses were closed and wandered about the grounds, the spring house, the slave quarters, and the hauntingly sad cemetery.  I took the grandchildren.
On one of my trips, I discovered that Mr. Tom Burgess was collecting material for a book about some of the Confederates who died at Franklin and Nashville, and I decided to write him about the Water Valley and Blackhawk men.  He was way ahead of me but kindly responded by sending me the story that we will be covering today.
First, let’s look at the situation leading up to the battle.  The Confederate General in command was John Bell Hood.  Through military politics he had managed to be appointed by Jefferson Davis to replace the beloved and respected Joseph E. Johnston.  Hood had convinced Davis that Johnston would not fight if he found the Union in possession of superior ground.  Davis told Hood not to abandon Georgia and for a while, after Atlanta fell, Hood tried to cut the Union supply lines but the Union had superior engineering skills and could often have the rails open again after a couple of days.
Hood then abandoned Georgia and began an advance across Alabama toward the Union distribution center at Nashville, TN.  He wanted to try to recapture that city and the stores of supplies for the Confederacy.
At Nashville, Union General George Thomas was in charge, and he was expecting the arrival of more troops.  One group, the 23rd Corps commanded by M. Schofield, was ordered to proceed toward Nashville but to try to delay Hood’s advance for a few days to give other Union troops time to reach Nashville and to allow Gen. Thomas to prepare to defend the city.
Hood’s Confederates began to catch up with Schofield’s Union troops near Columbia, TN.  After a small engagement there, both armies moved out for Spring Hill, with Hood hoping to get in front of Schofield before he could join the troops massing at Nashville.  There was fighting in Spring Hill but at the end of the day, Hood believed that he had succeeded in getting between Schofield and Thomas.  The Confederates settled in for the night.
John Bell Hood at this point failed to give clear orders as to which of his men were to guard the road, and, so Schofield began to move his men toward Franklin.  Almost all of his troops and 600 wagons moved past the encamped Confederates without being discovered.  Earlier that afternoon Hood had fallen from his horse and afterwards gave no clear orders.  Hood was taking laudanum for pain due to the loss of a leg at Chickamauga and the loss of the use of one arm at Gettysburg.  He was physically in no condition to lead his army.
Schofield moved all night to reach Franklin and immediately began to improve the existing breastwork around the south sides of the town.  In throwing up the breastwork, a deep trench was formed in front and head-logs were placed on top for cover.  His men worked feverishly to cut hedge into sharp points and to form other sharpened sticks into obstructions called abates.  He had several batteries of artillery and posted some across the Harpeth River in old Fort Granger.  He placed artillery on both sides of the Harpeth and along several places in the breastwork, some placed in angles.  There were batteries on high ground at the rear, also.
When John Bell Hood discovered that Schofield was no longer behind him, he flew into a rage.  Instead of taking the blame himself, he blamed his men.  He ordered his men to attack the most heavily fortified place in the Union line.  There was not an officer on the field that agreed with this decision.  S. C. Lee’s corps had not yet arrived with his troops and the rest of Hood’s artillery.  Hood had only two batteries of artillery and assigned one to Cheatham and one to Stewart, the two corps commanders on the field.  The hour was late.  A frontal assault was suicide, but Hood would not allow an attempt at attack on either Union flank.
Other business discussed at the meeting:
Lawrence Litten voiced a prayer.
Carl Vick reported on the scraping and painting of the church building.
Joy Tippit requested items for yard sale Oct. 6, Celebrate Coffeeville Day to be held in the YHS parking lot.
Julia Fernandez announced that the guest speaker for the September Meeting would be State Senator Gray Tollison.
Attending the August meeting were:  Rose Diamond, Yancydine Smith, Emma Hovey, Opal Wright, Tom Moorman, Alma Moorman, John Basinger, Stelloise Basinger, Tom Cox, Dave Hovey, John Perkins, Ruth Perkins, Cliff Chandler, Calvin Schmitz, Anna Allen, Kay McCulley, Joy Tippit, Bill Hamilton, Margaret Jean Ross, Jean Fly, Debby Hughes, Dot Criss, Jimmy Pinnix, Francine Pinnix, Thelma Roberts, Pat Brooks, Julia Fernandez, Lawrence Litten, Granville Vaughn, Curtis Berry, James Person, Carl H. Vick, Sarah H. Williams, Harold Spraberry, Dollie Smith, Sue T. Fly