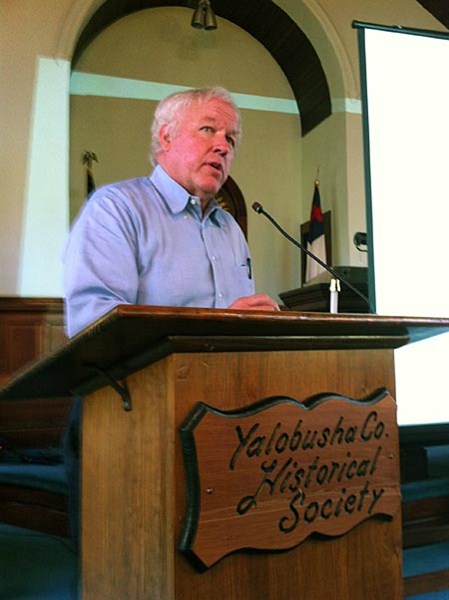 Major George Armistead asked Mary Pickersgill to make a flag so large that the British should have no difficulty seeing it from a distance –thus thirty-four members of the Yalobusha Historical Society listened as Richard Taylor, executive director of the Tunica Museum recalled events leading to the night Francis Scott Key penned “Star-Spangled Banner”.
In 1813 the United States was embroiled in the midst of the War of 1812 against the British.  Washington had just been burned.  First Lady Dolley Madison stayed to rescue the famous Gilbert Stuart portrait of Washington.  The British later dined in the White House and toasted their absent hosts.  But that tide was shortly to turn.  The British were turning their attention to Baltimore.  Defenses at Ft McHenry were prepared and the commander, Major George Armistead felt that the only things still needed for the fort were a very large garrison flag 30 by 42 feet and a smaller storm flag 17 by 25 feet.  Mary Pickersgill was hired under government contract and was assisted by her daughter, two nieces, and an indentured African-American girl. Mary sewed the flags in her small Baltimore home.  When the flags became too large, they were taken to Claggett’s Brewery where they were laid out on the floor of the basement so that they could be completed.  The government paid $405.90 for the garrison flag and $168.54 for the storm flag.
Because the British attack had coincided with a heavy rainstorm, Fort McHerny had flown its smaller storm flag throughout the battle. But at dawn, as the British began to retreat, Major Armistead ordered his men to lower the storm flag and replace it with the great garrison flag.  As they raised the flag, the troops fired their guns and played “Yankee Doodle” in celebration of their victory.  Waving proudly over the fort, the banner could be seen for miles around – as far away as a ship anchored eight miles down the river, where an American lawyer names Francis Scott Key had spent an anxious night watching and hoping for a sign that the city – and the nation might be saved. On September 14, 1814 Francis Scott Key, who was being held captive by the British aboard ship, saw the flag and penned the famous poem “The Defense of Ft, McHenry, now known as the “Star-Spangled Banner”.