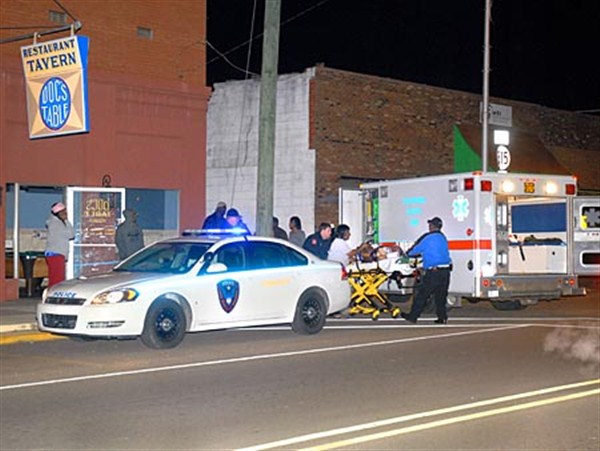 Police are investigating a shooting incident that occurred just after 10 p.m. Saturday night at a private party held at Doc’s Table, a former restaurant on Main Street. The Water Valley Police Department told the Herald that Calvin Alford Jr. came into the party and shot Bobby Hervey twice and fled. – Photo by Jack Gurner 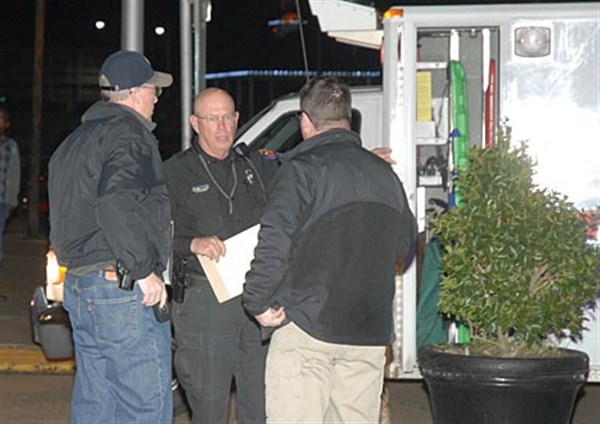 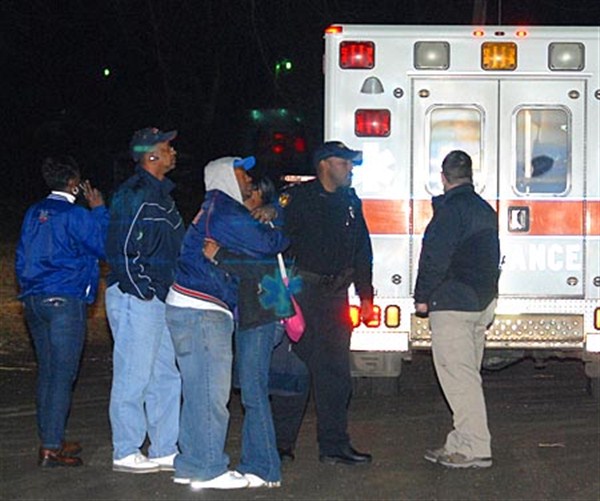 Friends of the victim comforted each other as police investigated the shooting incident. 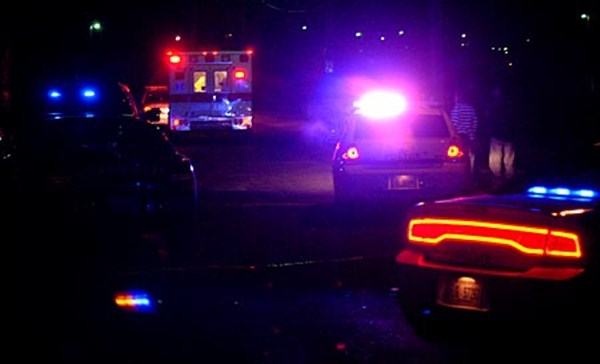 Blue and Red lights filled Railroad Avenue after after a shooting incident at the former Doc’s Table restaurant on Main Street just after 10 p.m. Saturday.


WATER VALLEY – A man celebrating his 42nd birthday was shot during a party in his honor Saturday night downtown.
Just a few minutes later, the alleged shooter, Calvin Alford, Jr., shot himself in the head with the same large caliber handgun he used to wound Bobby G. Hervey at the private party in Doc’s Table, a closed restaurant business on South Main Street.
Hervey of Taylor, whose birthday was Feb. 18, is reported to be in stable condition at the Regional Medical Center in Memphis. Alford died just a short time after arriving there.
Police Chief Mike King said that a female 911 caller reported someone being shot at 10:14 p.m. Police officers backed up by Yalobusha Sheriff’s deputies arrived on the scene and were told that some type of altercation had taken place between Hervey and Alford.
Alford produced the handgun and, according to witnesses, shot Hervey twice. Alford then fled the party, going across Main Street. He was seen in the NAPA parking lot on Blackmur Drive and confronted by deputies behind the Fischer Properties office on Railroad Avenue.
When the deputies approached, Alford put the gun to his head and pulled the trigger.
Medics treated both men at the scene and prepared them for transport by helicopter to the Med. A piece of furniture had to be moved from in front of the Main Street entrance door so that ambulance personnel could enter the restaurant building. The Water Valley Fire Department assisted in setting up a landing zone near the hospital.
Chief King said that an autopsy was being performed on Alford as a matter of routine procedure and added that the motive for the shooting – other than the altercation – is unknown.
Several of the party guests who witnessed the shooting commented that Alford had been despondent over the death just two weeks before of his daughter, Jasmine, 19, a student at Northwest Community Col-lege. She was a member of the Rangerettes and the Honor Society.
Dr. Craig Williams, an owner of the Doc’s Table restaurant said, “It was very tragic for everyone involved.”
He said that a former employee, Juana Felix, has been handling rentals of the facility. “We’ve had five or six functions there since we closed the restaurant. People contact her and she opens it and hosts while the function is going on.”

South Main Crash
In other city law enforcement news, police investigated a vehicle accident Sunday, Feb. 17, that injured Coffeeville Alderman George “Chic” Miller.
Miller was traveling south on South Main Street just before 2:30 p.m. when he was struck by a vehicle driven by Tina Tisk of Water Valley. Tisk was headed northbound at a high rate of speed, according to the police report, when she went into the southbound lane and struck Miller.
The impact knocked Miller’s vehicle off the road into a ditch. He had to be extricated by emergency responders before being transported to Baptist Hospital in Oxford. Tisk’s vehicle flipped onto its roof. She was also transported to Oxford.
Tisk was charged with DUI-other, reckless driving, no insurance and driving on the wrong side of the road.