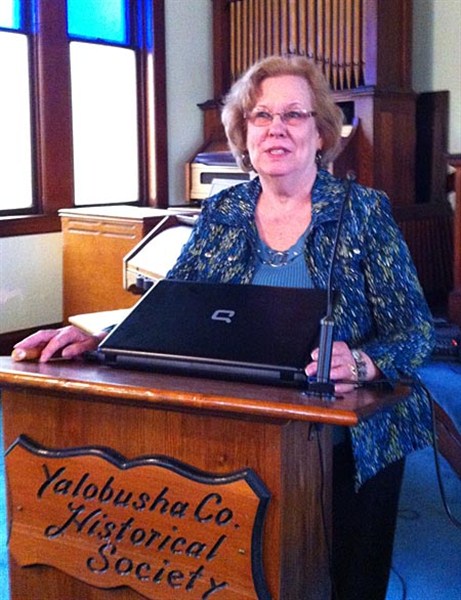 
COFFEEVILLE – Thirty Yalobusha Historical Society (YHS) members listened on February 21, as Judy Brasher, a retired nurse and anesthetist and grandmother of four, including a nine year-old boy with autism, presented the February program.  Her topic was autism.
She began by sharing her grandson’s story of being a normally developing toddler who was meeting or exceeding milestones until he received nine vaccines in one day.  In the three months following the vaccines, he quit talking, quit making eye contact and lost all social skills. Five months later, at the age of 17 months, he received a diagnosis of Autism Spectrum Disorder (ASD).
Mrs. Brasher stressed that she was not against vaccines but pro-safe vaccines.  She  shared that physicians who specialize in treating autism as a medical condition as well as a neurological condition believe that 49 doses of recommended vaccines from birth to kindergarten is more than some children’s immune system can handle, thus resulting in ASD.
Some of the points highlighted during the meeting by Brasher included:
• Autism is epidemic.  1 in 88 U.S. children are affected by autism.
• Autism affects more boys than girls.  1 in 54 U.S. boys are affected.
• Autism is defined by mainstream medicine as a developmental disorder with speech and social impairments accompanied by repetitive behaviors.          • Many physicians who primarily treat children with ASD and many of the autism families believe that ASDs are more of a medical disorder with neurological manifestations than is currently recognized.
• Autism is treatable.  Some children are recovering to the point of losing their diagnosis. However, many do not respond as well and remain non-verbal or low-verbal or low-verbal with notable deficits.              • Despite being the most vaccinated generation of children in the world for the first time this generation of children is not expected to be as healthy as their parents’ generation.  Fifty-four percent of American children suffer with a chronic illness.  Asthma, severe allergies, juvenile diabetes, juvenile arthritis, obesity, and celiac disease are all on the rise in children as well as autism.
• One in six children now have a learning disorder.  Most parents want to vaccinate their children.  Many of them would like to follow a slower less aggressive schedule.  This is not possible in Mississippi if the child has to attend daycare or school.
Forty-eight states give parents the options of a non-medical waiver which allows them to opt out of some of the vaccines or to use an alternate schedule.  Mississippi and West Virginia are the only two states that deny parents this right. There is an active movement going on in Mississippi for the legislature to change the vaccine law and become the 49th state to place healthcare decisions in the hands of parents and/or guardians.
Please come and visit us again, Judy.
Other notes of interest:
• Mike Worsham called the meeting to order.
• Officers will be elected in the March 21 meeting.
• Pat Brooks gave the monthly financial report.
• The YHS will raffle a $100 Wal-Mart Gift card at the Crappie Festival in Water Valley in May.
• It was announced that memorial bricks are being sold for $38 by the Coffeeville Masonic Lodge.
• Julia Fernandez announced that the March 21  speaker will be Dr. John Evans, retired orthopedic surgeon of the Summer Web area. His topic will be coronary artery disease.