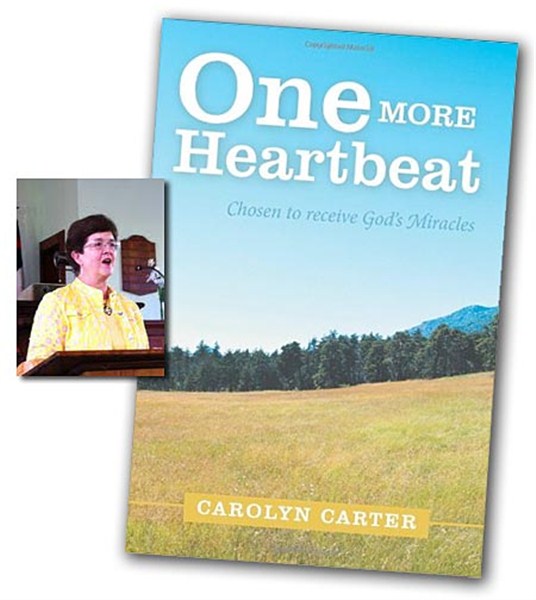 
COFFEEVILLE – Oxford author Carolyn Carter captures the glory of God in the miracles that have transformed her by learning to rely on Almighty God in all aspects of her life in her book, “One More Heartbeat.”
Carter was the guest speaker during the May meeting at the Yalo-busha Hist-orical Society and shared the fragile moments in life that led her to depend on God.
“I know the desperate moments of life, from the nerve-wracking worry over whether my marriage would survive to those sleepless nights wondering whether my rebellious son would ever return after running away from home to that frightening time  when a paralyzing accident left her with no vital signs for more than twenty minutes,” Carter reported to meeting attendees.
“When I broke both of my legs in an untimely accident, I never dreamed that my clumsiness would result in a true miracle through the grace of our Heavenly Father,” Carter continued.
She explained that no one ever expected that on the night of June 6, 1999, she would experience a pulmonary embolism from a blood clot that lodged in her lungs.
“I stopped breathing even before the ambulance arrived at our house and was totally unresponsive.  Even with the efforts of the experienced paramedics, I was without any vital signs for over 20 minutes.  Imagine the brain cells that were dying with an oxygen saturation of only about .05 percent,” she continued.
“During the time that the chest compressions were crushing and cracking my ribs and the breathing bag was continuing to pump air into my body, I was at peace in the arms of our Almighty God.  I was content, at peace and willing to stay with Him forever.  He softly spoke the words, ‘No, I am not ready for you here yet.  I have much more for you to do.’  Even through my begging to stay, He gently and lovingly returned me to earth to further serve Him,” Carter said.
Other notes of interest at the May meeting included:
•Mike Worsham called the meeting to order;
•Lawrence Litten voiced a prayer;
•Debby Hughes gave the monthly financial report;
•Joy Tippit mentioned the YHS Fundraiser on Celebrate Coffeeville Day.
Attendees included   Emma Hovey, Dave Hovey, Lawrence Litten, Bettie Litten, Julia Fernandez, Pat Brooks, Bobbie Hutchins, Bobby Hutchins, Mike Ayers, Carl H. Vick, Thelma Roberts, Jimmie Pinnix, Francine Pinnix, Kay McCulley, Sarah H. Williams, Debby Hughes, Mike Worsham, Joy Tippit, Harold Spraberry, Dollie Smith and James Person.