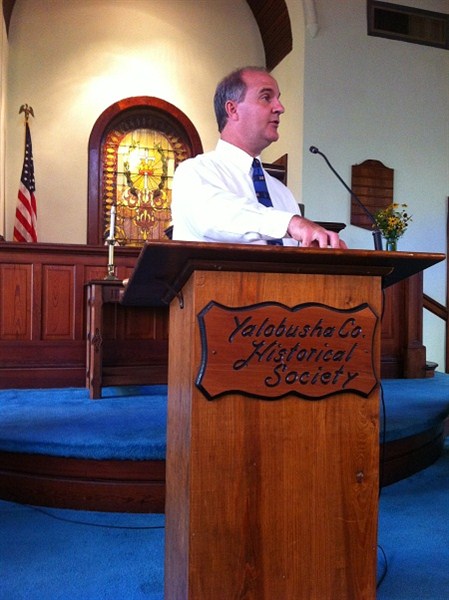 Amidst a Mississippi July thunderstorm, Randy Bishop informed twenty three members of the Yalobusha Historical Society that Mississippi’s strategic significance for both armies during the war between the States is still clearly seen today, a century and a half after the final battle of the horrific conflict.   With the mighty Mississippi River bordering its west side and the Gulf of Mexico providing its southern boundary, the state laid claim to important amphibious trade routes, causing it to become a scene of vicious sparring between troops in blue and gray.  Corinth, the site of a major railroad center quickly came under attack as aggressions commenced between the United States and the newly formed Confederate States of America.  Then Vicksburg, the focal point of the Union’s Anaconda Plan, became embroiled in deadly conflict.  These battlefields, as well as those at Holly Springs, Iuka, and Chickasaw Bayou, not only serve as a tribute to the men who fought for control of the land and fell under fire but also preserve an important piece of Mississippi’s past.  Though historical battlegrounds are lost each day, the Civil War Preservation Trust aims to save them from further deterioration.  The organization has achieved this goal at many sites throughout the Magnolia State, but some locations are still in disrepair.

Mike Ayers called the meeting to order in the absence of Mike Worsham.

Julia Fernandez introduced the speaker, Randy Bishop, an avid scholar of the War Between the States and an advocate for preservation and restoration of historic battlefields.