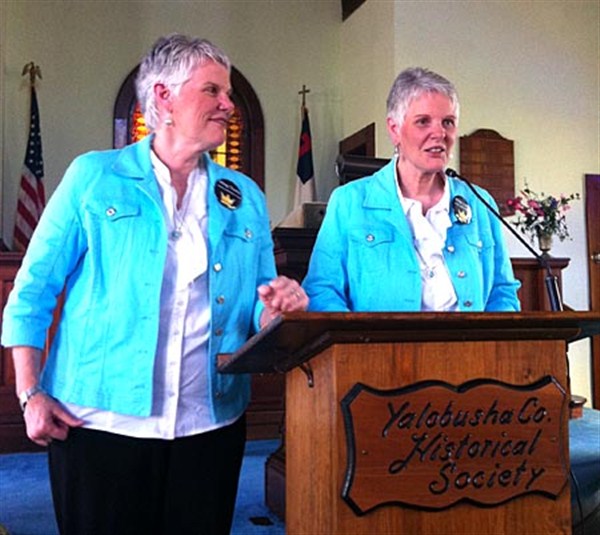 Katherine and Margaret or is it Margaret and Katherine???

On an unusually cool Thursday afternoon in the middle of August, the King Authors twins gave the YHS members a glimpse into Y’all Twins and Which is Which.

In 1950’s Oxford, Mississippi, identical twin sisters Katherine and Margaret King got away with everything.  Their stories begin at age six when they hopped a ride on the back of a wagon driven by William Faulkner.  Growing up on the same street where William Faulkner lived, they would hop a ride on the back of his horse drawn buggy to the end of the street.  They did not know that William Faulkner was famous, but they always treated him with respect.    Mr. Faulkner was smart, he could always tell which is which.  One talked more than the other, and Mr. Faulkner knew this.

Although Katherine and Margaret were born in Vicksburg, Mississippi, the twins and their three siblings, Bill, Kirk, and Allan, grew up in the north central hills of Mississippi in Oxford, a university town and a place they have always loved.  Home is where the heart is rings true for the King Twins —in Oxford.

Margaret Elizabeth King graduated from the University of Mississippi in 1971 with a Bachelor of Arts in Secondary Education with an emphasis in history.  Following a brief teaching career, she began working with the federal government as a Courtroom Clerk with United States District Judge Orma R. Smith in the Northern District of Mississippi.  After nine years, Margaret transitioned to Farmers Home Administration/Rural Development.   Margaret is currently semi-retired.

Both Katherine and Margaret find community service important.  Both authors contribute to Backpacks for the Homeless, a program that Margaret founded in the Oxford area.  Katherine created Santa Cause in 2010 at the Oxford campus of NWCC, whereby faculty identify needy students and donate gifts to their children at Christmas.  They are both members of the Oxford University United Methodist Church.

Y’all Twins and Which is Which is kid-friendly and is, at the same time, sheer entertainment for people of all ages.

Mike Worsham called the meeting to order and welcomed visitors.