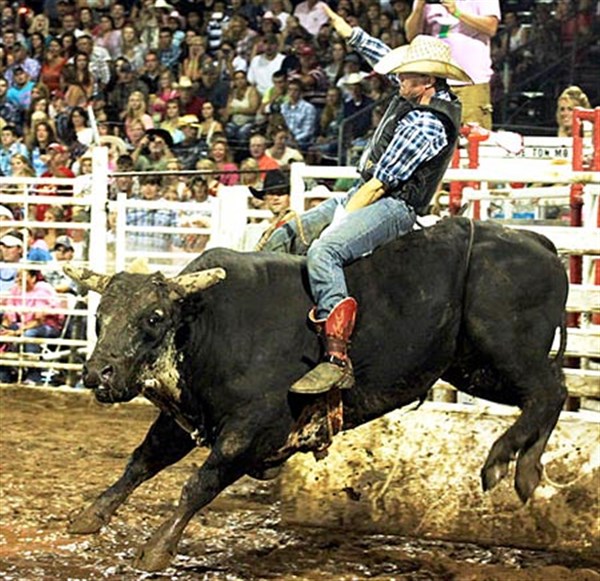 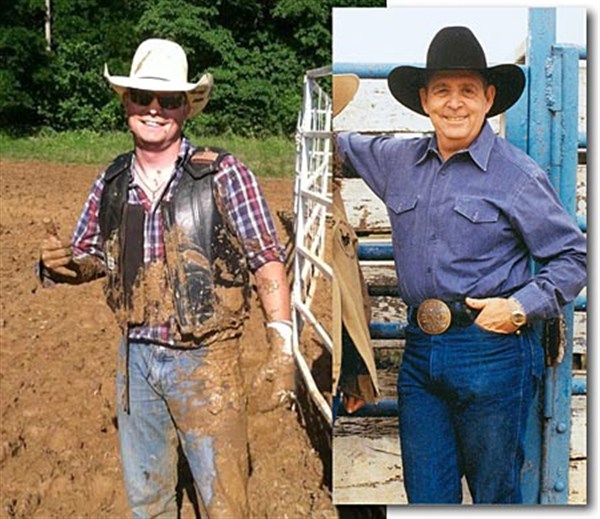 A spill from a bull can mean a muddy day as Ross Burney (left) comes up covered in mud. – Retired Northwest Mississippi Community College coach Bud Young (right) helped Burney get his start as a bull rider. After 10 years, Young will still work with Burney if he is struggling and needs input on his technique.


COFFEEVILLE–It’s been a decade since Ross Burney climbed on his first bull as a rodeo team member at Northwest Mississippi College.
That’s 10 years of getting on an estimated 250 to 300 bulls annually–and he shows no signs of slowing down. The enjoyment comes from traveling, meeting new people and, of course, the eight second adrenaline rush.
He has competed in Central America, South America and all over the United States.
A trip to Canada last month defines the experiences as good as any for Burney–staying astride Pants On The Ground for the full eight seconds with more than 20,000 people in the stands cheering.
Actually more than a half-million attend the week-long Festival De. St.-Tite. At 79 points, his first ride was enough to bring home a little money during the cross-country trip he and five other bull riders traveled in a van.
“It was a great experience, they treated us good,” Burney said.
That ride was important as he is pursuing a position in the finals in the International Professional Rodeo Association (IPRA), competing to get a spot as one of the top 15 money winners in the association.
But a successful bull riding career is a lot more than one ride, one rodeo or one year.
This year alone Burney has logged thousands of miles traveling to rodeos and bull rides in Idaho, Texas, California, Wyoming, Missouri and countless places in between.  He was also among a handful of American cowboys picked to compete in Costa Rica in an all expense-paid trip back in the spring.
He rides in different associations, but this year making the International Finals Rodeo (IFR) is at the top of his list.
“I have three finals made, I might have four I am working on it. A lot of times you will break even during the year, you make your money in the finals,” Burney explains.
The prize money in the finals can easily top five figures, money will help keep him on the road looking for the next ride.

Getting Started
Like many cowboys across north Mississippi, Ross credits his start to former Northwest Mississippi College Rodeo Coach Bud Young.
“I guess everybody around this area started with Mr. Bud. He has taught me most everything I know,” Burney said.
After joining the Northwest Rodeo team, his first ride was in the first rodeo at the Multi-purpose Building, ironically in his hometown in Coffeeville. He stayed on for six seconds and was hooked.
Burney’s mom, Janet Caulder, also has no trouble recalling that event.
“When he was little, he would say he wasn’t getting bulls, he was going to be a roper,” Caulder said.
That was before a college roommate on the rodeo team talked him into trying bull riding.
Burney’s family was already planning to attend the rodeo, it was the first in the new building, but they didn’t know Burney was riding.
That afternoon, Burney and his friends were over at his mom’s house when he braced his mom for the big news.
Caulder recalls that conversation 10 years ago.
“Guess I might as well tell you I’m going to be riding tonight,” Burney told her.
“I said, ‘riding what?’” Caulder asked.
“Bulls,” Burney said.
“Yeah, right,” she answered.
Caulder was sitting in the stands next to her mom, Margaret Ross, when they called his name for the next bull.
“Mother jumped up and ran behind the bleachers, she couldn’t watch,” Caulder recalled.
“I guess he thought we were going to discourage him. He had been secretly riding up at Northwest,” his father, Daryl Burney added. “Now when folks ask about Ross bull riding, I tell them I support my children in whatever they do, as long as it is legal,” he joked.

Staying In The Game
Both Caulder and Daryl Burney said they have learned to accept his love for riding bull in the years that have followed.
It’s a good thing, too, he has exhibited dedication unlike many who took up the business.
That’s what his former coach says sets him apart from many other students.
“Ross is different from most of the bull riders that came through the Northwest program,” Young explains. “I can count on one hand the guys that really continued with it,” Young told the Herald. “They may ride three or four years after college and just lose interest. You have to be dedicated.”
And Young has seen a lot of bull riders, coaching at Northwest for 36 years before retiring in 2009.
“After Ross got out of college he started going to some pro rodeos and just got better and better,” Young said about his former student.
The longtime coach credits the effort put forth by Ross as a key factor in his success as a bull rider.
Early on, the effort almost worked against Burney, as he would often override a bull.
“It’s checkers, not chess. They move, you move,” the coach explained.
“That’s really been the key, he got settled in. That’s what has made Ross so successful,” Young explains.
In addition to his dedication, staying healthy is also important to make rodeo after rodeo, year after year.
“I have taken some hard licks and landed on my head a bunch,” Burney said. Thankfully he has never had a concussion, but he has broken his right arm three times in the same place. After the last surgery he wears protection on the arm to keep from re-injuring it.
Back in the summer he nursed a bum knee that finally forced him to pull off the rodeo trail, come home and heal.
“July was a rough month, I had won a good bit back in the spring and I tried to keep going,” Burney explains.
By then his knee had swelled as big as a volley ball, making it difficult to even get his pants on.
The injury also affected him mentally, the thought of landing on the knee was in the back of his mind during each ride.
“Bull riding, I don’t care what level you’re at, is 80 percent mental,” Young explains. “It takes lots of confidence.”
“I just kept landing on it,” Burney said. Time and again he would have a great ride and get bucked off with a second, or even tenths of a second remaining before the buzzer.
So he came home and healed up for a few weeks.
He quickly headed back out on the road and “went back to winning.”

Winning, More Than Fun
While Burney’s dedication and experience are important, staying in the game also requires some serious money.
“It costs you about 300 to 400 dollars a day to stay out west,” Burney explains. For Burney and most bull riders, that money has to come from winnings.
That’s why he is focused on making the International Finals Rodeo as well as the finals in several smaller associations.
“Making the finals in the IFR, that’s a great accomplishment,” Young explains. “I would be tickled.”
Finals or not, Burney has no plans of slowing down. If he stays healthy, he figures he has another five or six good years ahead.
At 67, Young rode a bull just last year, more than five decades after he first started rodeoing.
“I can tell you, the ground gets harder and harder each year,” Young surmises.