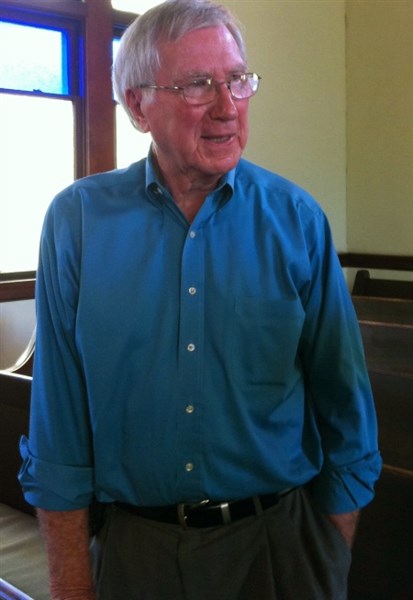 Funerals were pretty much of a community affair.  Homemade coffins were made and neighbors dug the graves.  All of this began changing at the turn of the 20th century. Yalobusha Historical Society members listened as Charles Cooper shared Water Valley funeral home history on October 17, 2013.  Cooper is a columnist for the North Mississippi Herald who worked for two Water Valley funeral homes.

The Henry Funeral Home began out of the J. W. McLarty mercantile store where coffins were sold.  Then, Benson Wright began helping families plan funerals.  Embalming became an interest due to out of town relatives and friends.  Bill Carter became McLarty’s first embalmer.  Then, Hayes Thompson embalmed for a while in the 1920’s.  Hamric Henry helped Mr. Carter after graduating from high school.  Mr. Carter died and “Skeet” Alexander from Grenada became the embalmer.

Hamric graduated from the Gupton-Jones school of Mortuary Science and worked at McLarty Funeral Home until he joined the Navy in 1942.  Robert McLarty never cared for the funeral business so he sold it to Oscar Douglass and George Garner.  It became the Water Valley Funeral Home.  Johnny Middleton and Carless Edgar bought the business at the end of World War II but soon the business went back to McLarty.  Hamric Henry bought the funeral home.  Hamric ran the business at first and Jesse Cox, a store employee, helped him with funerals.  Soon Paul Kiihnl began working but developed reactions from the chemicals and had to stop, and John McNamee began working.

In 1934 burial insurance became a practice as a result of Hugh Trusty’s interest.  Hugh Trusty rented a store for a funeral home, and Will Gardner began selling burial insurance for Southern Undertaking owned by M. T. Williams of Itta Bena.  The burial policy stated that the insured upon his death was entitled to a casket with suit or dress and transportation up to 100 miles.   Trusty bought a hearse, a tent, and grave equipment. Trusty would hire an embalmer from another funeral home when needed, but in 1935 he hired O.V Newman full time. However, the post office told Trusty that he would have to sell his business or quit working for the post office.  He sold his business to Cap Gardner, son of Will Gardner, and to O.V. Newman. At the beginning of World War II   Cap Gardner became a railroad engineer sold his interest to Newman, but the business remained Newman Gardner.  Newman hired Paul Kiihnl and Ray Schmit. James Kolb took Schmit’s place when he left Water Valley.  Later, James Kolb went into the insurance business, and Johnny Middleton was hired.   After Paul left, Newman sold an interest to Johnny and it became Newman Middleton Funeral Home.  Later, the business was sold to Lawrence Hale who later sold it to Hamric Henry, and the town went back to a one funeral home.

Julia Fernandez introduced Charles Cooper and announced that Jill Smith’s topic for the November 21, 2013 meeting will be the history of quilts.