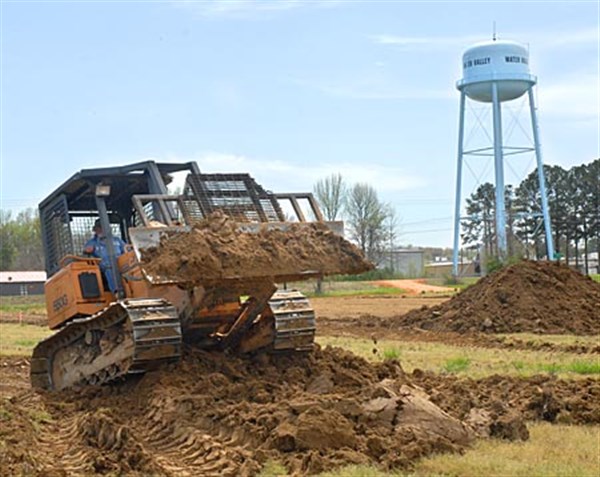 County workers from District 1 were working on the jail site, located on Hwy. 32 just past BorgWarner last Thursday. Wet weather has hampered the start of jail construction. – Photo by Jack Gurner


WATER VALLEY – Although budgeting time is months away and jail construction has not started, county officials worked during a recessed meeting last Friday to determine the cost to operate a larger jail.
The new jail will be constructed on Hwy. 32 East and will house a maximum of 65 county inmates. The county also plans to build a separate metal building adjacent to the jail to house up to 25 non-violent state inmates.
But for budgeting purposes, Sheriff Lance Humphreys presented figures based on 45 county inmates and 18 state inmates, as the jail is not expected to reach full capacity immediately after opening.
The current annual operating cost for the new jail is $304,117 annually, a cost that is expected to more than double to $664,601 annually. The new budget includes two full-time jailers and eight full-time dispatchers, giving the department two dispatchers on duty around the clock. The budget also includes an increase for feeding the prisoners and providing medical treatment that will come with more inmates.
But Humphreys calculated almost $266,000  that can be added to the jail budget to bring the actual amount of new money needed for operating expenses for the new jail to just under $94,000.
That $266,000 includes $110,000 the county currently pays the City of Water Valley to run the 911 call center. Supervisors have indicated they will move the 911 call center from the Water Valley Police Department to the new jail, and the funding for it will also follow.
Humphreys also said the county will receive an estimated $131,400 annually from the Mississippi Department of Corrections (MDOC)  to house 18 joint-state inmates.
The county will receive $20 per day from the MDOC for each state inmate. Humphreys said the inmates will work outside the jail on a variety of projects, ranging from picking up trash on county roads and state highways to cutting grass at county buildings. Currently the county spends over $7,000 annually for grass-cutting, money that will be diverted to the jail budget.
Municipalities in the county could also use the inmate labor for projects on city property, according to Humphreys.
Humphreys said two additional state inmates will work inside the jail as trustees, generating $14,600 annually based on the $20 daily payment from MDOC.

Repaying the Debt
Last November supervisor secured financing for up to $2.6 million to fund the jail in a lease-purchase arrangement. Supervisors have also allocated $430,000 from county coffers for the project, pushing the total cost of the jail to over $3 million.
The $2.6 million debt will be repaid over 20 years at an annual cost of an estimated $184,000.
That money is already in the county budget after supervisors have carefully guarded unallocated millage during the last two fiscal years.  The millage had previously been allocated to a hospital bond payment that was retired.