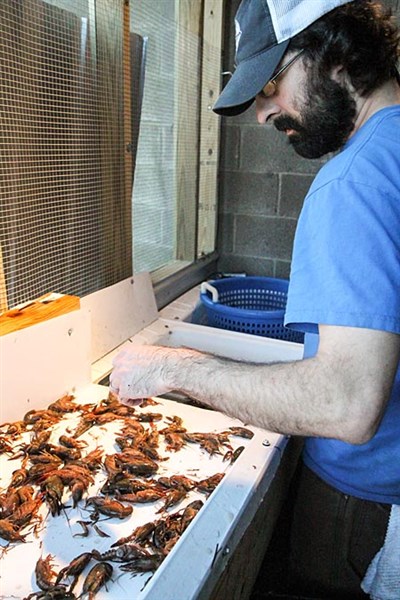 Justin Showah has perfected his recipe for cooking mud bugs that are regarded by many as second to none. – Photo by Jared Senseman


WATER VALLLEY – On a Friday afternoon in early spring, 34-year-old Justin Showah, owner of the Crawdad Hole Jr., stands above a bubbling, frothing pot of crawfish. The propane roars beneath 80-quart kettles of water as he stirs what amounts to a witch’s brew of flavor, along with a dash of entrepreneurial passion and discipline.
Cooking crawfish here is an art form, engaging the senses as it conjures Cajun culture north to Water Valley in the tiny building on Main Street that used to be a full-service gas station.
The Crawdad Hole Jr, extends the legacy of Crawdad Hole Sr. in Jackson, owned by Justin’s Showah’s father, Joe (dubbed “Crawdaddy” by some) Showah. Since 2010, Justin Showah has been conducting a sociological experiment of sorts – using food to bridge the gap between different cultures, socio-economic lifestyles and races.
He does this, in part, by stripping the dining experience to a bare bones level. Customers eat with their hands instead of utensils, from big steaming bowls of crawfish instead of from china. By taking the formality out of his business plan, Showah allows the customers to focus on the pure experience of eating.
“It’s about the atmosphere of eating with family, eating with friends and taking time to enjoy what God has out in the water,” says Showah.
At the stainless steel preparation station, he sprays with a hose the grime off the still living, muddy-brown crawfish. The mist from the hose combines with the smell of the crawfish. It smells like a fishing dock.
The aroma of New Orleans spices take Showah back to the days when he would peep over his dad’s shoulder to watch him wash the crawfish, or when he sucked his first crawfish head wondering how something that came from the mud taste so good.
“It does go back to your childhood,” Showah recalls. “Everyone has kind of seen those mud-pie looking things with the hole in the ground. Everyone can relate to that. That’s what the name comes from – The Crawdad Hole.”
Since his teenage years, Showah helped out his father, Joe Showah, at the restaurant’s Jackson location. He graduated from the University of Mississippi in 2000.
In 2010, Showah decided to expand his father’s business to Water Valley, where Main Street connects the lives of many residents.
“I appreciate that I can walk to my house, to the grocery store, and the way that everyone gets along and helps each other. They’re super supportive of what we do here,” Showah says.

Mud Bug Enthusiasts Are Diverse
When the workweek ends on Fridays, customers can barely squeeze through the door. Diverse patrons congregate in a tiny spot designed for one or two customers paying for gasoline or car repairs.
Construction workers stand beside students from Ole Miss. Piggly Wiggly employees stand next to the retail workers who have driven here from Batesville. According to Showah, people from all over north Mississippi come to find a culinary experience they can’t elsewhere.
Dixie Grimes, chef at the B.T.C. Old Fashion Grocery, believes it’s this type of diverse congregation that keeps people together in a spot where they can share a locally brewed beer as well as the events of the day.
“It is a great meeting spot for everyone. There are a few places here where you can get a beer. Also, the food here is stellar quality and you always know what you’re going to get. It’s consistency,” Grimes says.
In 2010, Showah and his wife, Alexis, built the Crawdad Hole, Jr from a building that suffered from five years of neglect. The ceiling was peppered with holes that leaked rain. The windows were shattered.
But the 1920s craftsmanship won them over. The couple loved the building’s exterior stones, their rusty brown hues and eggshell white patched together by a spider-web of grey grout.
The gas tanks and picnic tables out front add to the old-timey feel. In the dining room, Christmas lights from a hardware store crisscross the wall and big lamps with red, blue, and green bulbs loom above tables with checkered tablecloths. It’s a bluesy atmosphere.
The walls are lined with with old rust-speckled motor oil advertisements, 1960s album covers, actual vinyl records and concert posters of some of Showah’s childhood musical idols –Muddy Waters, Elvis Presley and various Motown artists.
“It brings back that moment when I fell in love with music,” he recalls. “I guess it’s just my little project to keep putting stuff up here and other people seem to like it too,” Showah says.
Reminders of the building’s past life don’t bother the customers, whose fingers are stained with red-orange seasoning The low-grade facelifts, he believes, bring out the easy pace of life in Water Valley.
“You just come in here and get your food, and then you sit down,” Showah says of the laid back dining experience.
He faces challenges, too. Sometimes the old, propane stove malfunctions, causing major setbacks in a busy day. Some days he might get a bad batch of crawfish, or find half the crawfish dead. Showah remains unfazed.
“That’s just life. Stuff doesn’t always go the way that you want. It’s all in how you respond to it,” he says.
Employee Michelle Bowles is a 21-year-old student at Northwest Community College, living in Water Valley. She says that serving at the Crawdad Hole has been the best job she has ever had, thanks to Showah’s go-with-the-flow, Zen-like attitude that lets her weather any hectic times.
Bowles believes the business has a lot to offer to the community.
“It’s doing really well. Usually it’s hard for things to stay in Water Valley. It’s more vibrant and adds more culture and character here,” Bowles says. Late on a Friday night, Showah looks over the crowd to see how his food is doing with his customers, how they are enjoying it.
He sees in them the fulfillment of a vision he began four years ago for the establishment– to allow all people in the town, all its families the chance to gather around big steaming plates of crawfish, gumbo, shrimp and crab, and feel comfortable in their own skin.
“It’s a come-as-you-are type of situation and that’s what we kind of want to portray. Be yourself. Eat with your hands. Eat with your friends.”