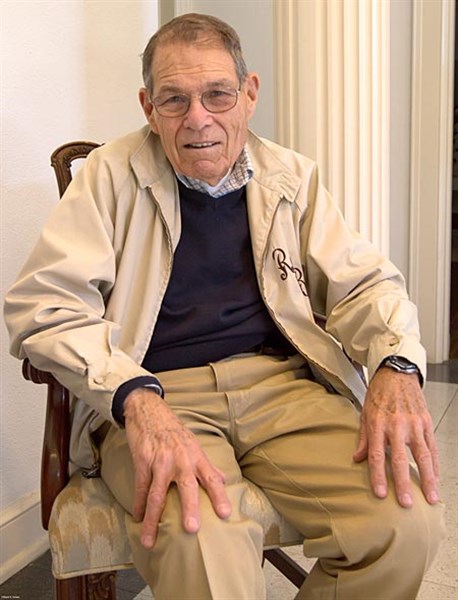 After retiring from BorgWarner six years ago, Bill McGoodwin has been able to devote more time to Kairos, a prison ministry. Although the primary purpose of the ministry is to share the word with inmates, McGoodwin said it has also increased his faith. – Photo by Mark Dolan


WATER VALLEY – Week-ends for retired auto factory worker Bill McGoodwin mean jail time – not for criminal behavior, but for spiritual intentions, to spread God’s word to inmates of the Mississippi State Prison.
For eight years now, McGoodwin, who attends First Baptist in Water Valley, participates in Kairos Prison Ministries, an international organization, devoted to helping inmates develop a spiritual starting point, a place from which to begin walking in a new direction.
McGoodwin says his work with the ministry hasn’t only impacted the faith of the prisoners, but his faith as well.
“It has definitely streng-thened my faith,” says McGoodwin. “As you talk with people and you see them, you become more familiar with humanity and more thankful and praising about God for what he’s done in your life,” said McGoodwin.
McGoodwin was born August 23, 1938 and worked throughout his life in the automotive component factory industry. Working with Holley Carburetors in Bowling Green, Ky., he soon found himself promoted within the company, which meant relocating to Water Valley. He made the move in 1973 and continued with Holley Carburetor, known today as BorgWarner, for 40 years.
In the late 1980s as a member of First Baptist Church, McGoodwin took a discipleship study course called Master Life, which impacted and grew his relationship with Jesus Christ and taught him about the love of God. For McGood-win, this spiritual heightening made it possible for his heart and mind to be “opened up to the opportunities that God had” for him.
The discipleship course led McGoodwin to Emmaus, a three-day spiritual experience based on scripture. While participating in the Emmaus walk, McGoodwin was encouraged by friends to consider involvement with Kairos Prison Ministries. Having enjoyed the Emmaus walk, he accepted the invitation.
After retiring from the Water Valley automotive factory BorgWarner six years ago, McGoodwin devoted more time to the programs that had allowed him to grow in faith, including Kairos.
The ministry slogan “changing hearts, transforming lives, impacting the world” aren’t just words to McGoodwin, but something he feels the ministry values and models.
“We have a team that’s trained and we go in for three days,” he explains. “The prison provides us with 42 to 48 prisoners and we administer the Kairos program to them.”
This program administered to the inmates is based on a model called Cursillo, a short study course of 12 talks about Christianity.
The Cursillo talks are mixed into the events of the weekend with five happening the first night, four the second night and three the last night. These talks describe God’s love to the inmates as well as how to have a relationship with Jesus Christ.
Topics include having a friendship with God, choices we’ve made in our lives and Christ’s love and why He died on the cross. Each Kairos team member leads a topic and shares his own testimony, or life experience, in that area and includes encouraging words of scripture.
Activities in a typical weekend, four weekends a year, for the ministry include the prisoners and the Kairos members getting to know each other, chapel, and even a graduation ceremony where each prisoner is presented with a cross necklace.
“I’d like to think we’re building a church in Parchman,” McGoodwin says, explaining event’s impact. “Through that process over the weekend, you began to see God work in their lives, and that’s a meaningful thing.
“It has opened up to me ways that God’s love is for everyone and I know that, but as you practice something God touches your life,” says McGoodwin.
“I can see areas in my life where I may not be the Christian that Christ would have me to be from my participation in Kairos.
But fellow Gideon and friend of McGoodwin, Donald Gray, says McGoodwin is just being modest. “You couldn’t describe a better guy. When he does something, he does it 100 percent— he’s a devout Christian man,” Gray said.
“He’s devoted for them down there [at Parchman]; he prays for the men, he asks us as brothers in Christ to pray for the men,” says Gray. “When he talks about it [Kairos], he talks with such passion.”
McGoodwin treats the prisoners like they are anybody else, Gray adds. “He acknowledges that they made mistakes, but he treats them in a forgiving way, because he knows we’ve all been forgiven by Christ.”
McGoodwin says there was one instance that pulled at his spiritual heartstrings. “When we get together the first night, everybody on the team is paired up with an inmate for the first time. I hadn’t been paired up, but my team members had been paired up with two people so I went over and took one of them,” he recalls.
“His story was that he didn’t feel like his life was going right and he thought he’d come and see what was going on; he’d seen other people come to Kairos and get changed,” McGoodwin says.
“Over the weekend I observed him, and at closing he came up and told me he may not see me again, the way things are in prison sometime, but that he would see me in heaven, and I thought well praise God— the way that he worked in his life over the weekend,” says McGoodwin.
“That was very meaningful to me because I had been there in the beginning, I had been praying, seeing God answer the prayer, and then I’m seeing what He did in his life,” says McGoodwin.
But McGoodwin says it’s not just the change in the prisoners’ lives that is fulfilling to watch, but to watch God work in the lives of his team members as well.