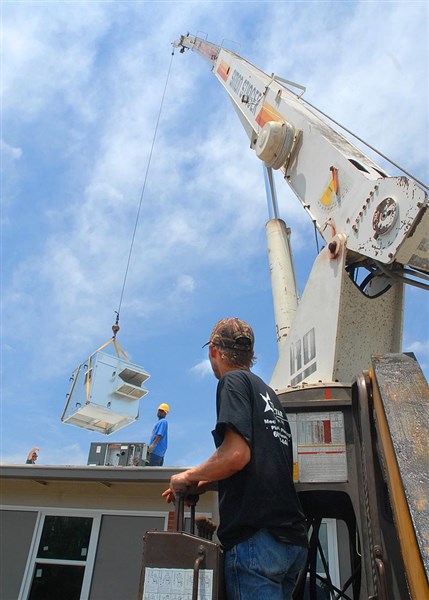 David McGregory of Tri-Star Mechanical lifts a 900-pound unit to the roof of the Water Valley High School. Work continues at the school on the window replacement and the air conditioning/heating projects. For more information about the summer renovation at the school, see story on back page. – Photos by Jack Gurner 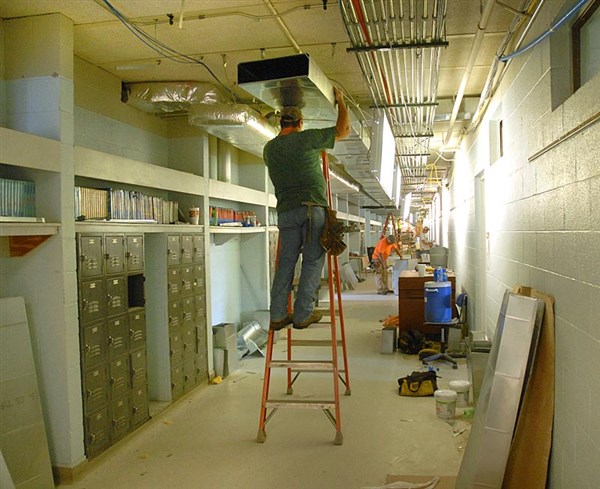 Jackie Hart of Hendricks Sheet Metal, Tupelo, uses his head while installing duct work in the hallway of the high school building. Coworker Jeffery Tutor (orange shirt) is putting together some of the metal ducts.


WATER VALLEY – Taxpayers in the local school district will be paying more for the 2014-2015 school year.
A combination of about $45,000 less in Mississippi Adequate Education Program funds and having to fund teacher pay raises will result in the Water Valley School District asking for an increase in the “ad valorem tax effort.”
The proposed increase may result in an increase in the ad valorem tax millage rate, according to the legal notice posted by the district. Ad valorem taxes are paid on homes, automobile tags, business fixtures and equipment and rental real property.
At the annual budget hearing Tuesday, July 8, District Business Manager Randy Goodwin said that revenue for the total budget is $9,756,012. “The breakdown on that is 19.13 percent from local sources, 66.85 percent from state sources and 14.02 percent from federal sources.”
Goodwin, who was one of only four people at the hearing, explained that on the expenditures side of the budget, salaries and benefits would be $7,778,201, which is 80.70 percent of the total budget.
Supplies, utilities and other miscellaneous items amount to $1,477,609, which makes up 15.31 percent of expenditures. Debt service is $384,748 or 3.99 percent of the budget. “That will leave us in excess of $105,454 based on projections,” he said.
Goodwin explained the breakdown of expenses in the district maintenance fund as 86 percent for salaries; eight percent for the buildings, which included utilities and insurance; three percent for the bus fleet for gas, oil, tires and repairs; two percent for student related supplies such as textbooks; and one percent for miscellaneous.
The state now requires school districts to maintain seven percent of the general fund after some districts, including Water Valley, showed a negative fund balance several years ago. Seven percent would be $459,825 of the local district’s general fund revenues. “We are well above the minimum,” said Goodwin. “At the end of this year the fund balance will be $1.3 million.
That amount would be higher, but school officials used a portion of the funds to pay for the air conditioning/heating and new window project at the high school. “We have saved money for doing projects like this so we don’t have to do a bond issue,” Goodwin said.


WATER VALLEY – Graduating seniors at WVHS will be required to provide final confirmation of completion of a college level course within 24 hours of graduation in order to walk with their class.
The school handbook policy clarification will only apply to college level courses that are replacing a high school course required for graduation, according to WVHS Principal Dr. Glenn Kitchens.
Although the number of students affected is very small, some seniors take college level courses in order to get a head start on their higher education. And in a few cases, the course will replace a required high school level course such as English composition.
“For seniors who are replacing a graduation requirement for a duel credit course, final confirmation of course completion must be submitted to the counselor within 24-hours of graduation,” Dr. Kitchens explained to school board members at their meeting July 7. “A final transcript would not be provided until we get that final transcript from the institutions.”
Trustee Pierce Epes expressed concern that the handbook change would penalize students who are going above and beyond the requirements and taking college level courses.
Dr. Kitchens noted that the school can’t graduate a student until all graduation requirements are met. “That is something that we are going to have to make sure the student understands.”
Superintendent Kim Chrestman said that WVHS wasn’t the only school facing this issue and suggested that the problem be discussed with Northwest Community College and Ole Miss officials as the new school year begins.
“This is going to have to be policy,” Chrestman said, but added that school officials would work behind the scenes to make sure that it doesn’t affect any students.
Among other items at the first Monday in July meeting, trustees:
• Heard a report from Superintendent Chrestman on the continuing construction at the school. He said that progress is being made, but he expressed concern over the limited time – less than three weeks – before school begins again.
He said that the HVAC and ductwork in the junior high building is complete, but there is still a lot to do in the high school building.
One of the concerns was getting floors in the buildings ready in time for the opening date. “We may not have the ability to strip and wax all of our floors and having it looking as nice as we want,” he added.
The superintendent continued that Hill Construction has begun work on the damaged canopy at Davidson Elementary School and that work is expected to be completed on schedule. Also, work by Marchbanks Roofing on the fifth and sixth grade building appears to be on schedule.
• Held a brief discussion with school board attorney Trent Howell on the possible acquisition from the Hershel Howell estate of a piece of property that adjoins school property near the softball field.
• Approved two memos of understanding; one between the school district and the Mississippi Depart-ment of Health and another with the Yalobusha County Sheriff’s Department.
• Reviewed changes in the Davidson Elementary School Faculty and Staff Handbook.