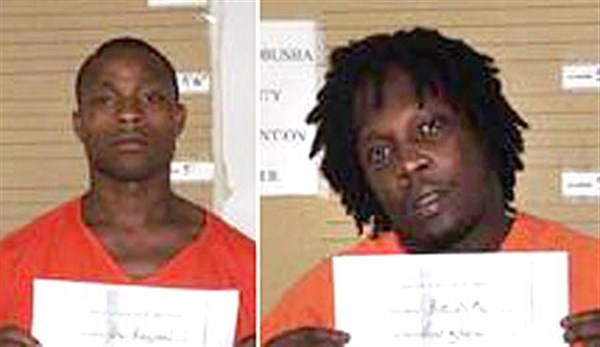 
COFFEEVILLE – Two men wanted by authorities were apprehended Friday night after attempting to flee a driver’s license checkpoint established by deputies and officers with the Coffeeville Police Department.
Sheriff Lance Humphreys reported Kevin Logan, 33, and De’Reginald Booker, 23,  were arrested after they attempted to avoid the checkpoint. Both men are from Coffeeville.
“They turned around on the officers and fled and a pursuit followed,” Hum-phreys said about the arrests.
Multiple units with the Grenada County Sheriff’s Department also responded as the men were apprehended on 333 Scenic Loop, just inside Grenada County.
Humphreys said the officers had to fight with Booker after a short chase when he bailed out of the vehicle.   Logan was taken into custody as soon as he exited the vehicle.
“We had been looking for Logan for quite a while, we had indictments on him plus the Mississippi Department of Corrections had a hold on him,” Humphreys told the Herald.
Humphreys said Booker was driving the vehicle and was charged with felony fleeing and numerous traffic citations. He also said the case remained under investigation, but  both men could face additional charges for felon in possession of a firearm.
In other law enforcement news:
Shaniqua Gibson of Oakland was arrested during a driver’s license checkpoint in Oakland on Hwy. 51 on July 12.
Humphreys said Gibson faces drug charges after deputies discovered alleged crack cocaine and marijuana in her vehicle.
She is charged with possession of a controlled substance and possession of marijuana in a motor vehicle. Her vehicle was seized.
Humphreys said the narcotics will be sent to the crime lab for verification.