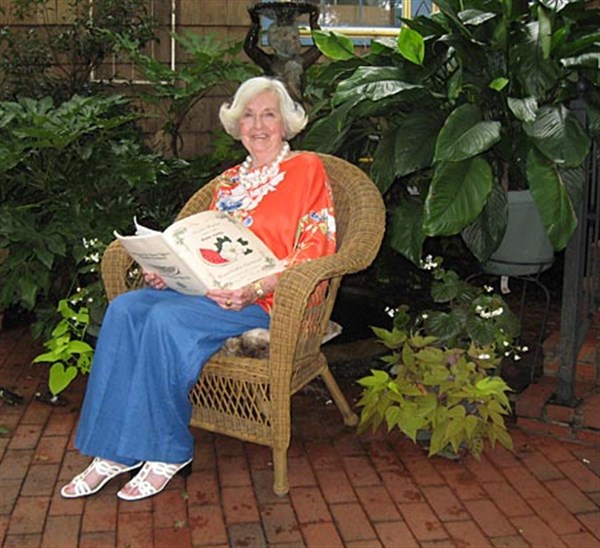 Dorris Crawford relaxes in her garden, one of her hobbies, among her massive peace lilies, measuring more than five feet wide. The lilies were gifts for her, one when her mother died in July and the other plant when Brownie died on November 4, both in 2007. Over the past seven years, she has nurtured the plants, moving them inside during the winter, to the extent that they have over tripled in size. – Photo by Lucia Holloway

By Lucia Holloway
Special To The Herald


WATER VALLEY – Dorris Hemphill Crawford will be the seventh recipient of the Luella Fair Community Enrichment Award. She will receive the award from the Town and Counry Garden Club on Thursday, July 31, at the Watermelon Music Festival, which will be held in the Civic Auditorium.
“I’m so humbled by how the Lord has blessed us,” she said. “It’s really embarrassing to receive this honor.”
“The award recognizes a Water Valley woman who has demonstrated continuous dedication to the betterment of our town through community involvement, service, and leadership,” said Teresia Edgar, committee chairman. Past award recipients were Teresia Edgar, Dale Tyler, Martha Edwards, Dot Trusty, Mary Lucia Holloway, and Mary Lou Jones.
Following her husband’s death on November 4, 2007, Mrs. Crawford continues heading their chicken brokerage business opened in the ‘80s in Water Valley. “The poultry industry is a roller coaster business. By that I mean, it is a hard business. We moved to Water Valley during a critical time in our lives when we had just about lost everything,” she said. “Earlier, we had a poultry hatchery and trucking business in north Georgia. During that recession, we had 14 cents per pound invested in one million chickens and had to sell them for 10 cents per pound.”
Realizing Brownie’s predicament, Pete Brown offered him a procurement position at Mott’s in Water Valley, where he would be responsible for purchasing all of the chickens for the plant. So Brownie moved his wife, two sons and a daughter, Len, Lorri, and Darrell, from McCaysville, Ga., located near the Tennessee-Georgia line on the Ocoee River, where Dorris was born, to Water Valley in December 1969.
Over the next few years, Brownie became president of Mott’s while Mr. Brown was away. Next, the family moved to Iola, Ky., where Brownie opened a plant for Tyson, Inc. After a short time, the plant was sold. Then, the family moved to Bay Springs where he managed a plant until it was sold. Returning to Water Valley, he worked for Mott’s again in buying poultry and brokerage.
Brownie established his own brokerage business in the early ‘80s. To supplement their income until the business was solvent, Dorris worked as a bookkeeper at Holloway Homes for five years before serving as office manager for Crawford and Company. “At one time, six ladies were part of our business office,” she said. “Because none of our children wanted to be part of the business, now we are a small operation of two brokers, Richard Shelly and Robby Parsons. Dee Young manages the business office and I serve as president.”
Referring to her community involvement, she said, “I don’t forget the hard times that we went through and those who helped us earn our living,” she said. “I feel we were blessed beyond our imagination. we cannot repay those who helped us, so I pass it on to others.” The Crawford Sports Complex was the result of the Crawford’s generosity. After Brownie died, Dorris donated funds to the Town and Country Garden Club for the Brownie Crawford Memorial Clock that was dedicated on May 8, 2010, in Railroad Park.
A member of First Baptist Church, she taught Training Union when her children were involved. A charter member of Compassion Ministries, she helps on many Thursdays when food is distributed and packs food boxes frequently. A member of the Water Valley Chamber of Commerce, she received the Braswell Hatcher Service Award in April 2012. She supports Yalobusha Habitat for Humanity and Yalobusha County Fuller Center for Housing.
Only one child, Dr. Lorri Williamson, a professor at the University of Missis-sippi, lives in Water Valley. Lorri and her husband, Mike, have two children, Cory and Joeli, who live in Oxford with their spouses. Len, a CPA, is a consultant who lives in Blue Ridge, Ga., with his wife. Their three daughters live near them. Dorris’ younger son, Darrell, lives in New York City. Dorris has five grandchildren.