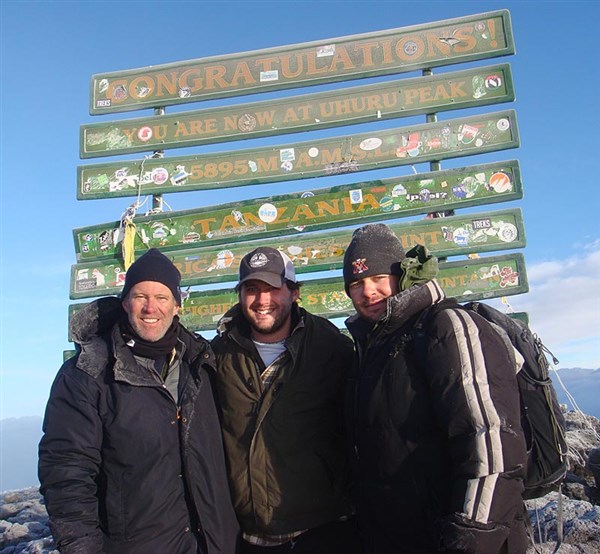 On top of Kilimanjaro at Uhuru peak on June 13 are (from left) Glen Evans, Ben Evans (note the Yalobusha Brewery cap and in the bottom photo) and Matthew McQueen. The trio scaled the iconic mountain in honor of Ben’s graduation from Milsaps. – Photos provided 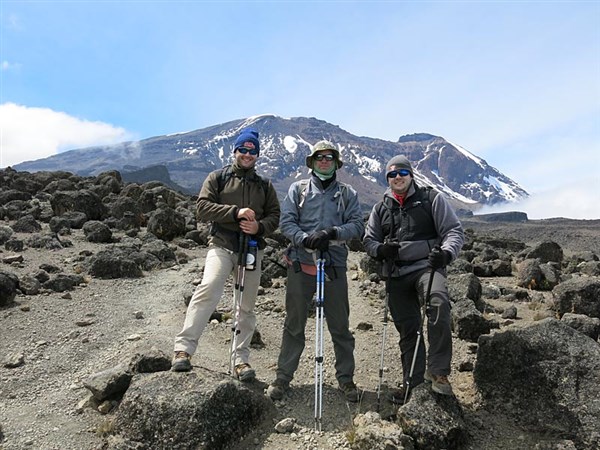 Ben Evans, Glen Evans and Matthew McQueen pose with Mount Kilimanjaro in the background. The trio really didn’t know what to expect, but added that some people don’t take the climb seriously enough and end up in trouble. 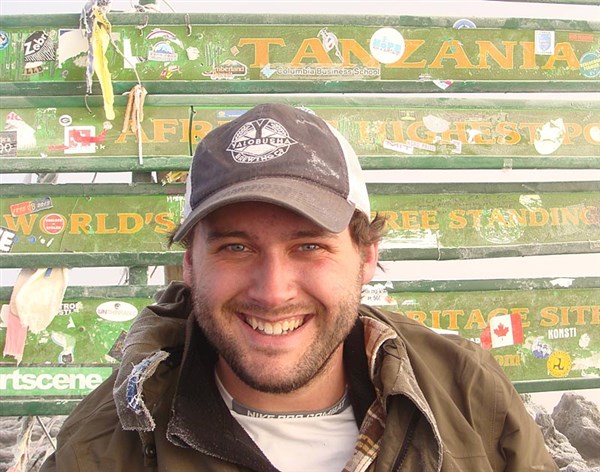 
OXFORD – A father and son with Water Valley roots got bitten by the mountain climbing bug and recently took on one of the world’s most iconic peaks.
Glen Evans, president of FNC Inc., a software technology company in Oxford, and his son, Ben, a recent Millsaps College grad, scaled Mount Kilimanjaro last month accompanied by a cousin, Matthew McQueen.
Ben explained that he and his father first got into hiking and mountain climbing when he was a freshman in high school. “We climbed an unnamed mountain in northern New Mexico and we kind of got the bug. Then we climbed a King’s Peak in Utah.”
The Kilimanjaro climb developed over time because the cousin lived and worked in Arusha, Tanzania, which is described as a jumping off point for Kilimanjaro.
“We kept saying that we were going over there and climb it, but we never did,” said Glen. “Then Matthew moved back to Texas. But, he has a girlfriend who runs a tour company over there. So, we decided to stop talking about it and go do it. She lined it up for us.”
The group flew from Memphis to Detroit and from there to Amsterdam and on to the Kilimanjaro Airport. The trip took two weeks with nine days on the mountain.
“We intentionally took one of the longer routes to see more and to have more time to acclimate,” said Glen. “It’s almost 20,000 feet. Altitude sickness is the biggest danger. We took about seven days going up and about a day and a half coming down.”
“We really didn’t know what to expect. It’s one thing on paper and something else when you are out there doing it,” he said. “People tend to take Kilimanjaro somewhat lightly, but it is a dangerous mountain because of the altitude.”
Ben added that there are physical conditions on Mount Kilimanjaro that can kill. One of them is AMS, which stands for acute mountain sickness. “It’s really tough to determine who is suffering from acute mountain sickness by looking at them. So, the guide had a pulse oximeter which measures your pulse rate and the amount of oxygen in the blood. If the amount of oxygen in your blood gets too low, it can be fatal.”
“We had a great trip, we were never in any danger,” said Ben. “But, a climber died from AMS while we were there. That’s why we really want to drive home how good the guide service was. Not only did they cater to our every need, but kept us safe the entire way up.”
Glen agreed and emphasized the importance of hiring a reputable tour company like the one they used, Java Safaris. “That’s a shameless plug for them. We had a great guide and terrific support.  It’s not worth cutting corners on expenses.”
According to Glen the government of Tanzania controls all access to the mountain and they require you to have at least four porters per person.
Kilimanjaro is what is referred to as a “walk up,” he continued.  “You don’t need ropes, but it is a long, steep walk. It is such an iconic mountain and because it is a walk-up, people take it lightly and those are the people who get into trouble health-wise. You definitely need to get in shape.”
Ben said that when you get to the top you see a sign that says, “Welcome to Uhuru Peak.” “Uhuru means freedom in Swahili. They renamed it when the country gained their independence. It’s really beautiful at the top.”
It was cloudy on the day they reached the peak and they were looking down at the clouds. On a clear day you have the African savanna spreading out behind you and a view of the Kilimanjaro glaciers.
“Over in the crater was really unique. Sort of a moonscape; flat, sand and boulders,” Glen said. “It’s a dormant volcano, it’s not extinct. There’s an ash pit in the middle of the crater. We walked up to where you could smell the sulfur coming up out of the ground.”
Glen estimated about 30 climbers in the base camp near the peak, but when you counted the porters and assorted others, there were probably several hundred people at the camp. “It’s a big mountain, so most of the time you don’t see another soul.”
“The day of the summit is a long day, probably 12 hours of climbing that day,” said Glen. “Coming down is not much easier because at the top there is a lot of scree, which is loose sand and gravel. You almost have to ski down.”
Ben said that he definitely has future plans for climbs. “Nowhere really specific yet, but I’ve kinda’ got the bug.”

Water Valley Connections
Glen is the son of Dr. Ben Evans, who spent his junior high and high school years in Water Valley after his family moved here because of his father’s job with the railroad. Dr. Evans practiced medicine here after World War II and left in the 50s to do a surgical residency in New Orleans. He then practiced in Grenada.
Cousin Matt McQueen is the grandson of Bessie Mae Hughes and the late Cleo Hughes of Water Valley.
Glen and Ben are the only members of their family interested in mountain climbing. Ben said that his younger sister, Elizabeth, has “zero interest” in scaling any mountains.
Ben’s mom, Paige, daughter of Baxter and Mary Lou Jones of Water Valley, is fairly supportive, according to Glen. “She’s kind of use to us running off and doing vaguely dangerous things with the other mountains that we have climbed.”
“But,” he was quick to add. “She told me that if anything happened to Ben not to come home.”