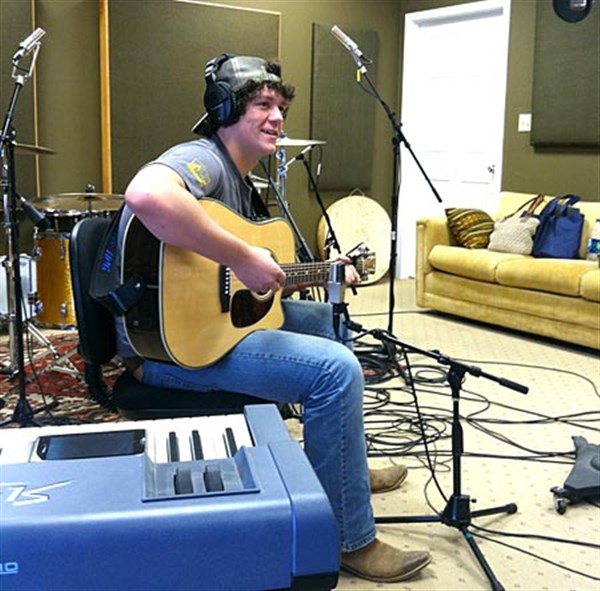 Jacob King is among a talented group of musicians who will take the stage Friday night above the B.T.C. Old Fashioned Grocery Store. King is currently working on his first album.


WATER VALLEY – A talented lineup of musicians will take the stage Friday night during the Loft on Main in the upstairs room of the Main Street grocery store.
Okolona native Chance Moore, former Idol contestant Priscilla Barker, and Water Valley resident Jacob King will each play about a half-dozen numbers, mixed originals and covers.
Joining the three musicians on the stage will be Byran Ward, Daryl Burney on bass, along with the Thacker Mountain Radio guys Mark Yacovone on piano and accordion and Wallis Lester on drums as the performance gets underway at at 7 p.m. There is a $5 cover charge.
“Chance will be there to support his soon-to-be-released record, ‘A Country Boy Like Me,’” reports Ward, who is coordinating the event and is producer at the Tone Room in Oxford where Moore’s record was recorded.
Barker is a 19 year-old country, singer/songwriter from Amory who recently appeared on this season of American Idol. She is currently working with a full band playing festivals and making local television appearances. She has also played several places acoustic in Nashville, the most recent being, downtown Puckett’s. She has a single “Slow Town” playing on 97.5 (Miss 98), local country radio station, and can also be found on iTunes and Google Play.
King is a singer and songwriter who is mid-way through recording his first album at the Tone Room. He is a 2012 graduate of Water Valley and juggles his time working, writing songs and recording the album.
King took a year off of college and started singing anywhere he could find a venue. After winning several contests, he earned the confidence to pursue his dream as a career.
“I am trying to get out there, I want to do it as a career,” King said about his passion for music. His first album will include eight original songs he wrote, a cover song and one more written by Ward.
Friday’s Loft on Main is a prelude to exciting performances scheduled July 31 and August 1.
On July 31 the Eisenhauer Band will take the stage with Ward, Burney, Yacovone and Lester during the annual Watermelon Carnival Music Festival sponsored by the Town and Country Garden Club
The next night, the entire crew will share the stage during the Street Dance sponsored by Renasant Bank. The Street Dance doubles as a record release party for the Eisenhauer Band’s “Under The Influence.”
During the first half of the Street Dance King, Barker and Moore will take the stage with the same crew from a week earlier – Ward, Burney, Yacovone and Lester – and Amelia Eisenhauer.
Following the fireworks show, the Eisenhauer band set will play for an hour and a half.