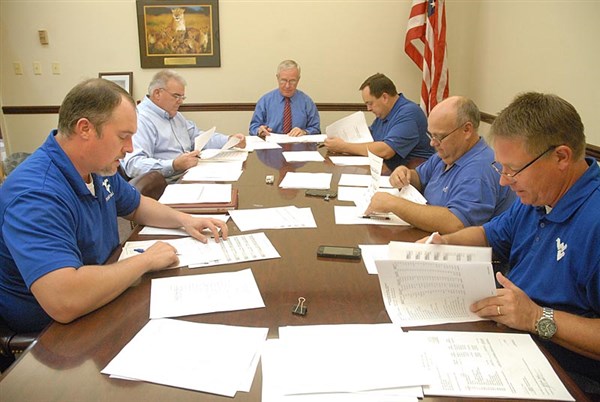 School officials at work going over business during the July 21 meeting from the viewpoint of board president Lamar Burgess, who wasn’t in his seat.


WATER VALLEY – District School Trustees voted Monday night not to join a lawsuit against the Mississippi legislature over Mississippi Adequate Education Program funding.
The unanimous vote came after Superintendent Kim Chrestman recommended that the district not participate in the lawsuit. “There could be significant unintentional consequences that could be devastating to the state and many school districts,” Chrestman said.
“Based on what I think these consequences could be, I will be recommending to the school board that Water Valley School District not participate in the lawsuit.”
After Chrestman’s comments, School Board Vice-President Taylor Trusty questioned, “On the heels of his report, do we want to act on his recommendation on the lawsuit?”
Board President Lamar Burgess motioned that the district not participate in the lawsuit, which was followed by the unanimous vote.
During a brief discussion after the vote, trustee Casey Washington said, “When you have a state-funded agency such as the schools suing…It just doesn’t look good.”
Chrestman credited Jackson attorney Jim Keith, who specializes in education law, with explaining the many downsides to the proposed legal action.
Among the problems foreseen by Keith, according to press reports from around the state, include the fact that Mississippi doesn’t have $1.5 billion and the Mississippi Department of Education is the least cut agency in the state. He also has said lawyer fees would be taken from any money recovered and the lawsuit has the potential to alienate state leaders.
Two weeks ago on July 7, Casey Lott, attorney for the Booneville School District, appeared before the school board to brief trustees on the proposed legal action. He came in place of former Governor Ronnie Musgrove who is recruiting school districts across the state to join the lawsuit and who was originally scheduled to appear.  He said the gist of the lawsuit is that, according to the statute, the Legislature is required and has been required to fully fund MAEP since 2010.
Lott noted that full funding didn’t occur that year or in 2011, 2012 or last year, when it was $250 million short despite having $400 million for the rainy day fund.
“So, we are gathering a group of school districts to file suit,” he continued. We’ll seek what is called a declaratory judgment in Hinds County Chancery Court declaring that the Legislature owes these past due funds, which total about $1.5 billion to all the school districts combined,” he said. “Water Valley’s portion of that money is over $4.1 million.”