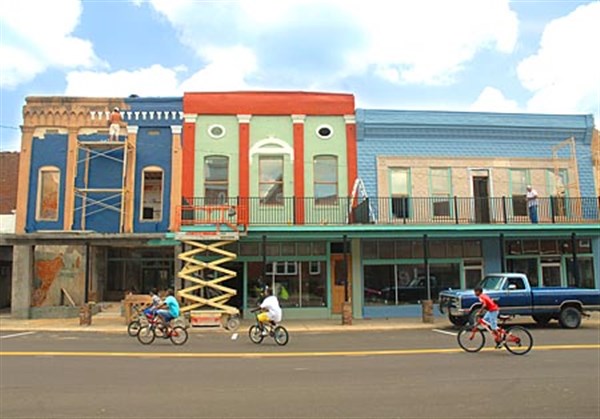 Painters Billy Branton (left, on scaffold) and Tony Lexa (right) worked 12-hour days during the last week making the front of the Blu-Buck Buildings dazzle just in time for the Watermelon Carnival. – Photo by Jack Gurner


WATER VALLEY – If you didn’t see the vision back on a dreary October day, it may have become a little clearer last week.
That’s when the row of buildings on Main Street dubbed Blu-Buck Mercantile came to life with vibrant colors shining from the building facades. And while the fronts are now prettied up just in time for the carnival, what’s been going on inside is equally impressive as the building owner and developer Kagan Coughlin is only three months away from his deadline to complete the project.

A Work In Progress
During a brief break from work Tuesday morning, Coughlin detailed the progress and remaining hurdles to have eight apartments and five retail storefronts downstairs ready to rent by the end of October.
“It’s always been a 12-month project. That’s my agreement with the bank, who is a very important partner,” Coughlin said about the financing obtained from Mechanics Bank.
“Tools down, walk away,” Coughlin added.
He’s well on his way, with two apartments ready to move in and the others getting close. With four apartments entrances opening from the rear of the buildings, concreting the parking at the back of the building remains the biggest hurdle to advertise the spaces for rent – a job he hope to complete by mid-August.
“In the next four weeks, we will be out of the upstairs,” Coughlin explains. Getting the upstairs work complete means his crew will be out of the living space, another step before he can rent the apartments.
As for the downstairs retail space facing Main Street, Coughlin plans to leave them as empty boxes and customize each space based on the customer’s needs as they are rented. The space includes four full-size downstairs buildings and a smaller, coffee-shop style space adjoining the courtyard in the north building.
“I don’t think I will have any trouble renting upstairs, but filling the downstairs with long-term, successful businesses is a challenge,” Coughlin said, adding that he is open for input from the public.

Building a Working Partnership
The task to gut and renovate the five buildings that encompass almost an entire city block on the east side of Main Street was daunting, to say the least, as Coughlin and his crew got to work with the deadline already looming.
The key was assembling a skilled crew, a group that would come from all walks of life with a variety of skills.
The crew includes Jerry Vaughn as master mason on the job.  Vaughn has spent countless hours on the monumental task to shore up crumbling bricks that threatened the very foundation of the buildings as well as decorative work that gives the project character that will last for decades. Vaughn has also done the much needed plaster repairs on the walls.
John Forsyth is the electrician, plumber, carpenter and “whatever else is happening” on the job.
Jeremiah Gord has earned the position as project manager. Gord is last to leave and lock up the building every day.
“Pretty much, anything I put in front of him, he can figure out and I can walk away,” Coughlin explains.
Coughlin has also utilized manpower from the Branch of Hope, a local ministry and half-way house for men struggling with substance abuse. He started hiring helpers from the ministry with the basic tear-out work. Some have suffered lapses in sobriety and not been able to make it through the long haul.
Others, like Gord, have become important fixtures in the project.
His skilled painters, Scott Lexa and Billy Branton, worked 12-hour days last week to complete the painting on the front of the buildings.
“Scott has been here since we got to our painting point. He is a very skilled painter,” Coughlin said.
While Branton was hired as a painter, he morphed into a handy-man that would attack a problem.
“I turned around and there was a hole in the wall and he patched it and painted it. You can’t even tell is was there,” Coughlin said.
Another key person working on the job is Darron Smith, who has done 95 percent of the sheetrock finishing.
But Smith also had a surprise for the job, he also followed Vaughn’s plaster repairs with the finishing work.
“To make (plaster) look like a smooth wall is a lost art,” Coughlin explained.
Smith’s skills were only discovered after Coughlin had searched without success for someone with this ability.
“Nobody knew he could do that,” Coughlin explained.
For the entire crew, sharing the vision was the first important step, according to Coughlin.
“Everybody here has a real sense that they own whatever they are doing,” Coughlin explained.
Lexa shares this sentiment with a sense of pride from the four months he has spent on the project.
“It really is a blessing to be part of something bettering the community. Being productive and benefitting Water Valley as a whole,” he said.