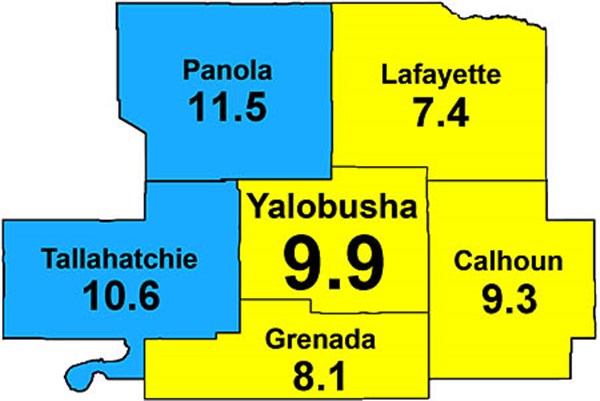 
WATER VALLEY – Yalobusha County’s June unemployment rate is up one-half a percentage point over the May rate with another 30 people out of work.
The latest figures from the Mississippi Department of Employment Security show that Yalobusha County’s May unemployment rate of 9.9 percent is well above the state average of 8.7 percent.
According to MDES, 4,990 people were employed during the month out of a labor force of 5,540 as compared to 5,030 employed during May out of a labor force of 5,550. A year ago in June 2013, 5,040 people were employed.
The labor force is defined by MDES as the estimated number of people eligible for work or actively seeking employment. But, those figures don’t include people who have given up looking for work or are no longer participating in the labor force.
Five years ago in June 2009, the unemployment rate was at a high of 16.5 percent. The lowest rate during the period was 9.8 percent in June 2013.
In comparison to the five surrounding counties, the Yalobusha unemployment rate was less than Panola (11.5) and Tallahatchie (10.6) but more than Calhoun (9.3), Grenada (8.1) and Lafayette (7.4).
Initial unemployment insurance claims went down over the month from 63 in May to 34 in June. And, continuing claims went up from 440 in May to 540 in June.
The June 2014 initial claims (34) are less than the 52 in June 2013, but the continuing claims are considerably higher (540) than the year ago figure of 489.
MDES paid $87,734 in Yalobusha for unemployment benefits in June as compared to $61,786 a year ago.

Improper Payments
MDES officials are warning employers that the rate of improper benefit payments is at an unacceptable level nationwide. A root cause of this high rate is employers’ failure to provide information needed to determine if the claimant is eligible to receive benefits.
What this means to Mississippi employers is that if you fail to provide a complete and timely response to a request for information regarding a claim and as a result that claimant is overpaid, your account will be charged and your tax rate could increase. Even if you ultimately win on appeal, you may still be charged for benefits paid to the claimant.