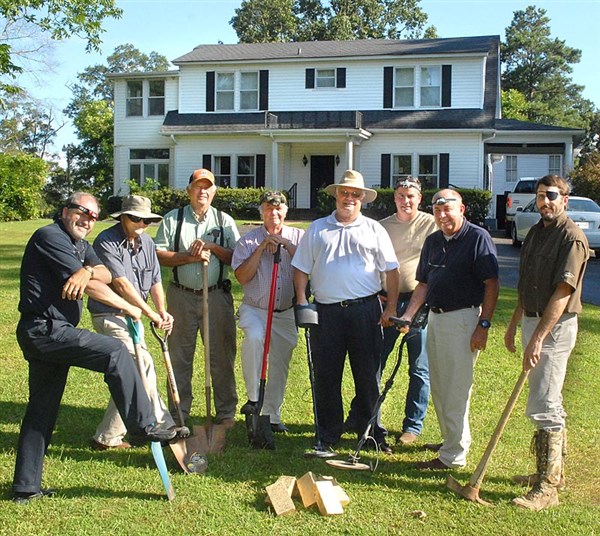 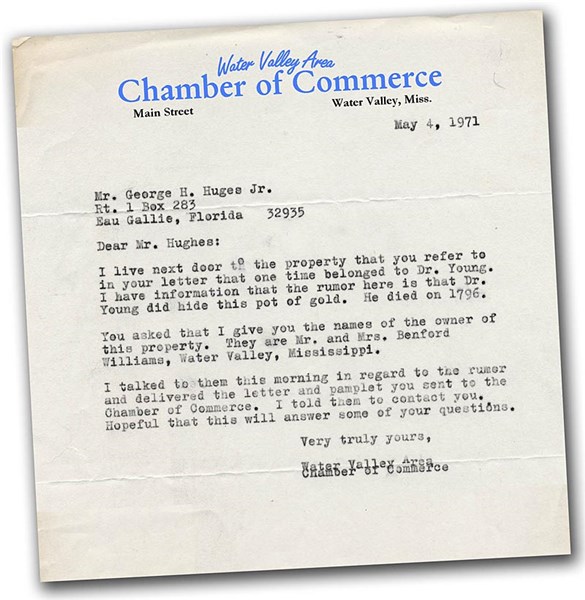 This is a copy of a letter from Bluford McCullar of the local chamber to a man in Florida who requested additional information about the Young treasure back in 1971.

Monday wasn’t the first time treasure hunters had traveled to Young Street in Water Valley to look for a pot of buried gold dating back to the Civil War. But fate prevailed for the seasoned group of treasure hunters when gold bars were discovered in the yard of Snooky and Mary Lou Williams.
The subject of speculation for more than a century and a half, reports of the hidden treasure resurfaced in the early 1970s and a detailed account of the origin of the treasure was  published in a 1971 issue of True Treasure. That report brought treasure hunters from far and wide but to no avail as they were turned around by the property owner.

Gone But Not Forgotten
A  recently rediscovered 1971 letter on Water Valley  Chamber of Commerce letterhead prompted the latest quest for the treasure. The letter was in response to a question about the location of  the treasure and pointed to the Williams’ residence as the likely spot.
The planning lasted for months and the group struck Monday while the Williams were away. With the aid of a dowsing stick and metal detectors, the pot was uncovered in the middle of the front yard and extracted with minimal damage.

The History
According to the report in True Treasure, Dr. John N. Young lived and practiced medicine in Water Valley during the Civil War.
The doctor had considerable wealth and buried it when he learned Union troops were approaching Water Valley. A skirmish subsequently occurred between Union and Confederate forces near Water Valley and a number of the wounded Union soldiers were brought to Dr. Young for treatment.
Although initially reluctant, the doctor treated the Yankees who stayed in the aging doctor’s home for three days. Fearing they would return, he left his money hidden.
According to the lore, he was shunned by the people of Water Valley for patching up the Yankees. The doctor lost his son in the Battle of Shiloh and soon fell ill and died without recovering his treasure or revealing the hiding place.

Questions Keep Coming
Although Snooky’s “fair share” of the treasure was left behind, the remaining treasure was transported to an undisclosed location. Questions remain about how to divide the bounty, as the crew contemplated which member earned the largest share.

(Editor’s Note: While the sources used in this story are authentic and the treasure hunt  occurred, the actual “gold” discovered has not been tested for authenticity and the entire story actually sounds too good to be true unless it was a joke on Snooky.)