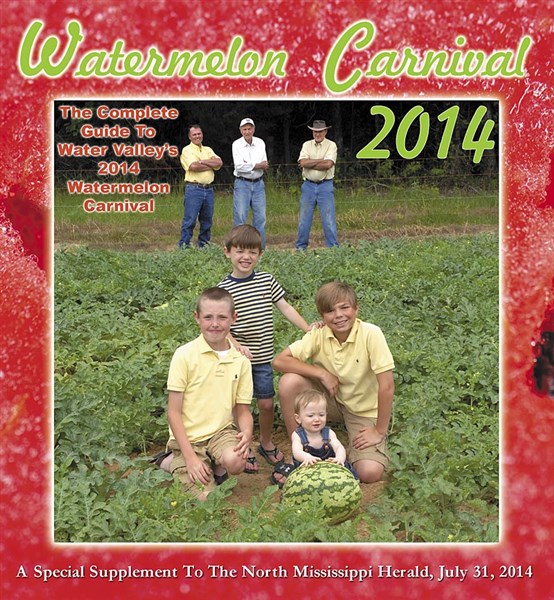 
WATER VALLEY – The area’s watermelon growing heritage will be celebrated this weekend for the 45th time in the city’s history.
Thousands will gather at City Park and at venues around town to participate in activities that range from a walk/run for the early risers to class reunions, some of which just might run late into the evening. And many of the activities are set to a musical beat provided by daylong entertainment from the park gazebo.
Activities formally kick off Thursday night with the Watermelon Carnival Music Festival sponsored by the Town and County Garden Club. The annual musical treat will feature the Eisenhauer Band, who just happen to be releasing their first album this week.
They will be followed by performances by Lauryn Sperling, who will be offering a little something different with her ballroom dancing.
And, as always, the show will be kicked off by everyone’s favorite, The Sharecroppers, dubbed Yalobusha County’s house band. The show will be hosted by Erik Fearing, worship leader from First Baptist Church, who will debut the local music video, “Happy,” featuring a cast of hundreds of local folks singing and dancing… some almost on beat.
On Friday, shoppers can browse the many carefully selected vendors and hang around for the music of Cadillac Funk at 4:30 and the Community Band at 5:30. Opening ceremonies with Mayor Larry Hart will commence at 6 p.m. followed by introduction of Watermelon Queen Peyton Hill and her court. Music by Jacob King will follow.
The street dance sponsored by Renasant Bank and featuring the Eisenhauer Band and Friends, including Priscilla Barker, a former American Idol contestant begins at 8 p.m. Other friends who will share the stage include Daryl Burney on bass, the Thacker Mountain Yalo-bushwackers with Mark Yacovone and Wallis Lester. Also on stage will be Okolona singer Chance Moore and our own Jacob King.
A spectacular break in the music will be fireworks provided by Mechanics Bank.
After the fireworks, it’s time to pick it up a notch as secret, hidden judges in the crowd will pick out the best dancers in the group and award prizes in a contest sponsored by Renasant Bank.
All of that might be enough for most folks, but there’s still much more beginning Saturday morning at 6 a.m. with the Lions Club Pancake Breakfast which will run until 10.
The 27th Annual 3K Run/Walk gets underway at 7:30, so you might want to wait until after you run to get those pancakes.
Things will be hopping both downtown and at City Park all day with the 19th Annual Car Show in Shuffield Park; a look at Water Valley’s railroad history at the Casey Jones Railroad Museum from 10 until 4 p.m.; and the Yalobusha Country Club Open Golf Tournament just a little ways down South Main Street.
Back at City Park, there is daylong music on the gazebo. To make it easy to see the downtown and City Park activities, an air-conditioned trolley will run every 10-15 minutes between the two points.
There will be watermelon games for those who like to compete and get sticky at the same time and if you just want to get sticky without too much exertion, there are free ice-cold watermelon slices at the south end of the park.
This year Chamber organizers have added an exciting new contest to the melon games – Melon Mania. With input from the crowd, prizes will be awarded to the carnival goer with the best watermelon outfit or watermelon prop.
There is so much to buy and so much to eat at the park, you might want to save a bit of money and tummy room for the Train Tracks and Pork Attack cooking contest set up behind Renasant Bank. A $10 sample plate gives you the chance to become a barbecue judge and vote on your favorite team. Winners will be announced at 5 p.m.