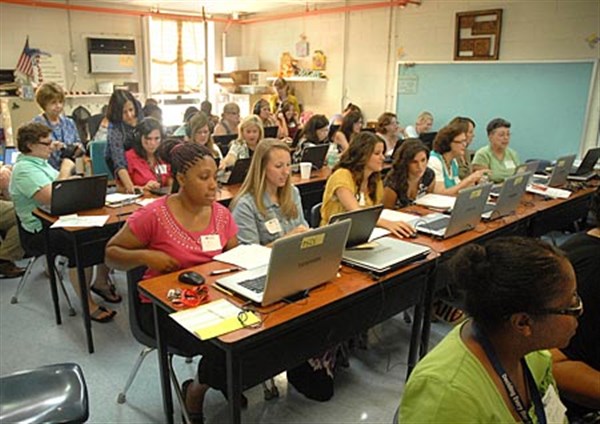 Teachers at Davidson Elementary School attended a staff development session on early literacy and reading Tuesday in preparation for the new school year. The training was presented by Cyndia Narrero of Renaissance Learning.


WATER VALLEY – At midday Tuesday only hours remained for last minute preparations before students begin arriving for the first day of school Thursday.
At Davidson Elementary School visitors were greeted by a nice clean smell and neatly polished floors in the buildings and a spiffed-up office credited to DES office manager Nicole Eubanks. New principal Brad Parker said that the janitorial staff had been hard at work on the classrooms and hallways.
Noticeably missing was the 1985 vintage carpet that had begun to deteriorate. It was replaced with new tile floors. Also replaced was the damaged covered walkway between the main building and the 5th and 6th grade classrooms. Electricians were expected to install lights on the structure Tuesday.
The school also received a school nurse grant and nurse Hope Shaw, R.N. pointed proudly to one of the new additions, an emergency defibrillator mounted on the wall near her office. The teachers and staff will receive training so they will be able to use the life-saving device.
Principal Parker noted that although teachers will carefully monitor students, the youngsters should be aware of how they are going to get home, especially on the first day.
DES counselor Karon Stanford said that about the same number of students were expected this year as last.
Meanwhile, on the west side of town, WVHS Principal Dr. Glenn Kitchens was beginning to relax. Up until the last few days, school officials were a little nervous that the window replacement project and the installation of new HVAC equipment would not be finished in time. But, Tuesday the equipment was in place and with the exception of a little construction dust found hiding in a few places, the projects were complete.
Dr. Kitchens credits janitor Larry Brassell and his staff with getting the school cleaned and ready in a very short time. “It’s unbelievable the work they did,” he said.
He also credits the BETA Club students under advisor Angie Hodge with doing a number of chores as part of their community service. He added that the club members picked up trash, helped move books and furniture, ran errands and even cleaned out fish tanks from the 7th grade science classroom. “There is no way we would be as far along without their help,” said Dr. Kitchens.
Drivers should take their time and watch for pedestrians when going through the school parking lot, he warned. Students and drop-offs enter through the west lane of the middle entrance road and exit on the far west end. Busses and teachers enter in front of the district office building and exit through the east lane of the middle entrance road.
Staff and teachers at both schools were treated to lunch Tuesday prepared by the ladies of the Sylva Rena Baptist Church WMU.
The school buildings will be open at 7:30 a.m. Thursday morning.