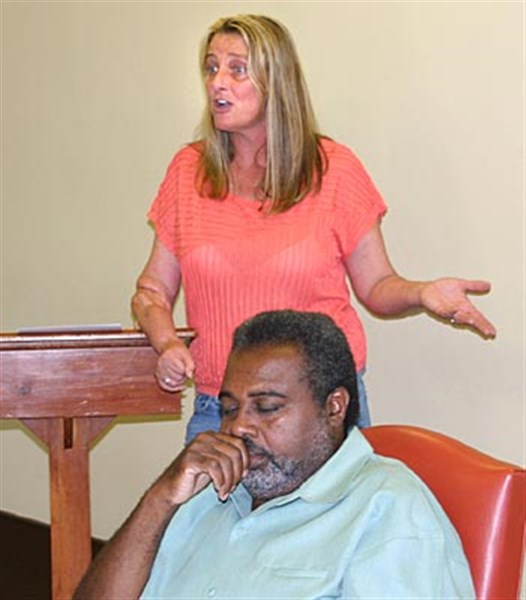 Patricia McCammon alleged that the sheriff’s department did not properly handle the 911 call after her daughter and granddaughter were injured in an accident. – Photo by David Howell


PINE VALLEY – Slow emergency response to an accident on Hwy. 32 on July 25 brought harsh allegations from the mother and grandmother of the victims.
Speaking at the “first Monday” supervisor meeting in Water Valley Monday, Patricia McCammon said emergency responders did not respond to the accident.
“I want to address the board for the neglect that the county gives the people who live here,” McCammon told supervisors.
She reported her daughter and granddaughter were riding an ATV on Hwy. 32 when they were struck by a vehicle.
“911 was called three times. My mother-in-law got hung up on. No one got dispatched,” McCammon told supervisors.
She reported the two girls, ages eight and 11, were left on the ground for over 30 minutes before they were transported in a private vehicle to Baptist Memorial Hospital in Oxford. They were airlifted to Le Bonheur Hospital where they were  treated and released in a 48-hour period.
“The only excuses I can get, why we didn’t get help, was that it was a state highway and it was the (state) trooper’s responsibility,” McCammon added.
“Everybody knows that if it had been y’alls children, someone would have been there,” McCammon said.
”I don’t know that, but I would like to hear a response from the sheriff’s department. I would like to know what happened and why it happened,” Board President Tommy Vaughn responded.
Sheriff Lance Humphreys first looked to Board Attorney John Crow for legal advice before answering the allegations.
“Mrs. McCammon has gone all over town telling my deputies she was going to sue me and the county,” Humphreys reported.
“Have you made a full investigation?” Crow asked.
“Yes,” Humphreys answered, prompting Crow to advise the sheriff that he could provide details about the incident.
“As far as somebody getting hung up on, nobody got hung up on,” Humphreys explained.
The first call dropped, Humphreys added, explaining that it could have been a problem with the cell phone or the call transfer from the 911 call center in the Water Valley Police Department to the sheriff’s department.
Humphreys said that first caller had requested an ambulance at the 911 center, but his dispatcher did not get the instructions because of the dropped call.
The second 911 caller listed the location as east of Turkey Creek Church, according to the sheriff.
“Turkey Creek Church is in Calhoun County and Calhoun County was dispatched,” Humphreys told McCammon.
The third call was a family member, who provided an exact address and requested the police, according to the sheriff, who explained the highway patrol was dispatched to the new location.
“How long it takes them, I don’t have any control over that,” Humphreys told supervisors.
“Lance told me himself there were three calls made. If there were three calls made… someone needs some help,” McCammon countered about an ambulance not being dispatched to the scene.
“One of them dropped and one of them didn’t know the address,” Humphreys explained about the calls.
“I know what my mother-in-law said,” McCammon countered about the third 911 call.
Humphreys reiterated that the third caller requested the police and did not ask for an ambulance, a statement that was refuted by McCammon.
“It is on the 911 tape. Nobody said anything about any injuries. Nobody said anything about needing an ambulance. All they said they needed was the police,” Humphreys told supervisors and McCammon
“Something has to change around here. Something has got to change quick,” McCammon as the back-and-forth dialogue continued.
Ma’am, you are talking about one incident that happened. It is terrible and we are going to get to the bottom of it. But we have hundreds and hundreds of calls that have been responded to by people who do a wonderful job and we are proud of them. We are not proud of this, but we are going to find out what the bottom line is.  And we have everything on record and we are going to listen to it,” Vaughn countered.
“And I understand that, but still I don’t like hearing ‘that is a state highway, that is the troopers’ area,” McCammon continued. “If we don’t have enough law enforcement then we need to hire some more to work this county like it should be worked,” she said.
As she left supervisors vowed to investigate the matter and revisit the issue.
Humphreys told the Herald after the meeting that his department dispatched an estimated 1,400 911 calls requesting an ambulance in 2013.
“Our dispatchers have a standard routine they follow with each and every call,” he added.