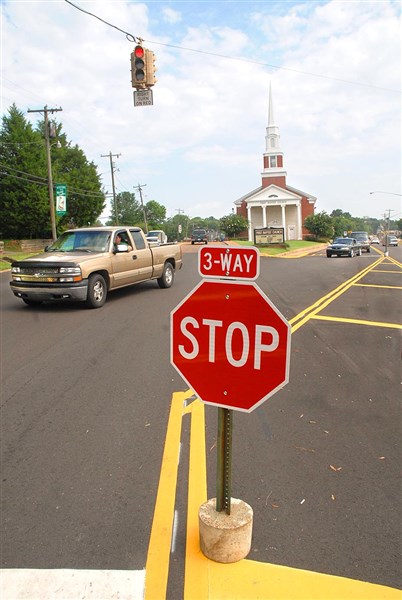 Many Water Valley drivers – at least those posting on Facebook – are in favor of making the Main and Central Street intersection a three-way stop permanently. Some are even in favor of taking down all the city’s traffic signals. – Photo by Jack Gurner


WATER VALLEY – It took a while to get used to it, but most drivers are finally managing to navigate the Main and Central Street intersection after the aged traffic control signal light went kaput last week.
But, by the time everyone learns to stop at the three-way stop signs and then go when traffic clears, the signal light may be back in operation again.
Electric Department Manager Andy Hall, whose workers maintain the city’s traffic control signals, said that he is in the process of locating parts. “We maintain them for the Police Department,” he added.
The city’s street lights and the traffic control signals are under the jurisdiction of the Water Valley Police Department, who pay the electric bill under the heading of “public safety.”
The problem is that the signal uses “technology” that was outdated at the end of the last century and is hard to replace. The electro-mechanical relay system was the cat’s pajamas half a century ago, but is being replaced by computer chips and LED (light emitting diodes) that cost more, but are much more efficient.
An estimate to replace the signal light is $20,000. While that seems like a lot, the Arizona Department of Transportation posted on their website that it cost between $80,000 and $100,000 depending on the complexity of the traffic. And, they added that it costs about $1,400 a year to operate a modern signal light.
When the light went out early last week, workers were able to turn the red light on. But, the steady red signal not only brought drivers to a halt, it kept many of them from moving for much longer than necessary.
“I was waiting for it to turn green,” a female driver huffed when she complained to the Herald.
By the end of the week, electric department workers were able to get the light to flash red, which seemed to help the traffic flow.
Opinion on the street differed on whether or not the city should put the relic back in operation. “Bout time they took that light down,” a driver shouted to the Herald reporter who was at the edge of the street taking a picture.
“When is that (expletive deleted) going to get the light working again,” shouted another driver, referencing a high-ranking elected official.
On Facebook, the opinion was definitely against the signal light. At press time there were around 90 posts and the vast majority were in favor of getting rid of the light and going permanently to the three-way stop. In fact, some who posted wanted to eliminate every traffic signal light in Water Valley.
Many of the opinions were about being able to get  through the intersections faster. Which is interesting at a time when many cities are trying to slow traffic on their streets because of safety concerns and quality of living issues.
The city’s traffic signals were the topic of discussion six months ago at the city board meeting when Alderman Larry Bell recommended setting the signals at North Court and Central and Main and Martin to flash red. Bell explained that he had seen that technique used successfully in Grenada at intersections along Hwy. 51 and Hwy. 8. But, he added that he would be for leaving the signal light at Main and Central as it is.
Mayor Larry Hart said  that the traffic signal light situation is under study.