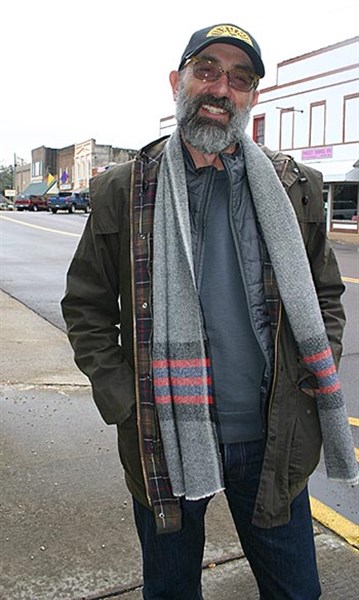 WATER VALLEY – For the last month, Jack Sonni has soaked up the southern hospitality while conducting research for a novel. He spent the time living in an upstairs apartment at Blu-Buck Mercantile. It wasn’t his first trip to the area, he has made several trips to Oxford, but he had heard and read about Water Valley.

Sonni has a rich background, working as a musician, chef, marketer and now a writer. He talked little during the interview about his glory days as “the other guitarist” with Dire Straits. He played with the band during the mid-80s, recording sessions for “Brothers in Arms” and the tour that followed in 23 countries with 256 shows.

Sonni’s month in Mississippi has been spent researching the Mississippi Delta for his novel, a fiction account that will chronicle a trip by Italian immigrants from western Pennsylvania through the Delta en route to New Orleans.

His novel will combine a bit of his family’s Italian background with what he has learned about the Mississippi Delta.

“I’m Italian, my background is Italian,” he explained. “I found out my great-grandmother was a bootlegger. She ran a boarding house for the minors – (miners) and workers that were coming over from Italy,” he explained.

While his family did not have Mississippi connections, that’s where his research will help play a role. On an earlier trip he learned how Italian immigrants had populated the Delta.

“I have been studying some of that, both the industrious side and the criminal element,” he explained. “I wanted to use the library at  Ole Miss, and hopefully spend some time at Delta State University,” he added about this trip.

Sonni’s winter trip coincides with down time from a literary center in Martha’s Vineyard, where he is a writer-in-residence.

“It’s called Noepe Center for Literary Arts,” Sonni said, explaining that Noepe is the name the Wampanoag Indians gave the Island of Martha’s Vineyard, or “the place between two streams.”

The literary center is located in a sprawling sea captain’s house in Edgartown, Mass. that closes during the winter.

“It’s too big to keep running during the cold winter. That gives me three months of time to spend on my own,” Sonni added.

He was first selected as a writer-in-residence in 2013, where he worked on his memoir “Rock n Rolled,” that detailed the journey that took him from New York clubs to Live Aid and MTV with Dire Straits in a two-year whirlwind tour.

Between residencies Sonni was also to tap his marketing background, working with Noepe on several projects. Selected for a second tenure in 2015 as a writer-in-residence, he will focus on his novel when he returns to the literary center.

Sonni first visited Oxford a year-and-a-half ago and was immediately impressed with the area.

“It was like, wow, this place is amazing – the food, music and the literary scene, obviously. The people that I have met, both in town (Water Valley) and up there (Oxford) have just been fantastic. The hospitality is unbelievable,” Sonni recounted.

He decided to stay in Water Valley on this latest trip and found Kagan’s new apartments listed on-line at AirBnB.

“It’s a beautiful, comfortable spot. I think he did a really great job,” Sonni said about the accommodations.

During the last four weeks, Sonni said all of the buzz has been about Water Valley. He has enjoyed the food at The BTC Grocery and the Crawdad Hole. He has taken the tour of Yalobusha Brewing Company. Most of all he has enjoyed the camaraderie.               “Everyone has been so friendly and open to introducing me to people they know and those who they believe can help in my research.”

“Water Valley has been on the lips of everybody that I have talked to. I have overheard conversations from so many people looking to buy property down here,” Sonni explained.

“After being here these past few weeks and getting to know the town and people here, you know, I could easily find myself down here,” Sonni said, adding that he had looked at several different houses. His four-week trip ends Wednesday, hopefully he will be back.

Posted in Talk of the Valley

Come Out And Meet The Blue Devils Friday