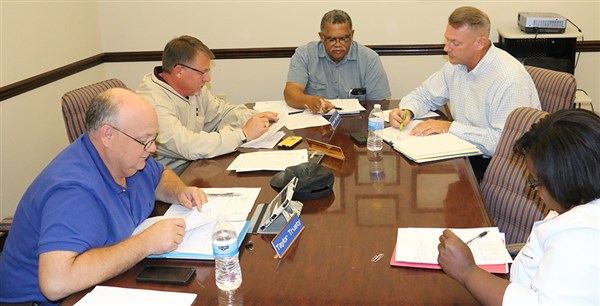 The latest school data released by the Mississippi Department of Education was analyzed by school board members (from left) Taylor Trusty, Pierce Epes and Lamar Burgess, Superintendent Dr. Michael McInnis and Assistant Superintendent Sharon Lipsy at Monday’s meeting. (Not pictured is Chris Terry.)

WATER VALLEY – Davidson Elementary School and Water Valley High School are both rated C schools for the 2015-16 school year, giving the school district an overall C rating. The letter grades for schools and districts are based on the Mississippi Statewide Accountability System released last week by the Mississippi Department of Education. This marks the second year both schools and the district received a C rating, following three consecutive years of a D rating.

“In three years we have gone from almost an F to six points from having a B,” McInnis explained about the DES scores.

“I will be honest with you, yes I was disappointed because we are so close. But we are going to right direction,” McInnis told board members.

At the high school, the district received 592 points on a 1,000 point scale, 34 points shy of a B rating for the 2015-16 school year. During the 2014-15 school year, the high school was 49 points away from a B rating. McInnis cited the graduation rate as the biggest factor in achieving less improvement at Water Valley High School.

“The graduation rate hurt us because it counts double,” McInnis explained.

The graduation rate was 69.5 percent, down from 84.7 percent the previous year. The 2016 graduation rate is based on students who entered ninth grade for the first time during the 2011-12 school year, according to MDE.

McInnis also explained that this year’s grades are not strictly comparable to last year’s because of several factors, including a new standardized test and a recalibration of the scoring system.

“Next year the state is saying this is not changing. This time next year it is going to be a true apple-to apple-comparison,” McInnis explained about the test scores.

“I would like to say thank you, to our students, our staff, our teachers and our administration,” trustee Pierce Epes said Monday night after the scores were shared. “We have gone from a low point of almost an F school to here, where we are almost a B,” Epes added.

MDE calculates the points based on how well students perform on state tests, whether students are showing improvement on state tests each year and if students are graduating within four years. MDE also reported the rating factor assesses how well schools are helping their lowest achieving students improve.

Grades are broken down into grades of A to F.

An “A” grade represents scores in the top fourth of schools, after all the scores in the state are divided into four groups. The grade is characterized as the “highest status” and “highest growth” a school can achieve.

A “B” grade designates scores above the state average for the given year. The grade is characterized by “high status” and “typical growth.”

A “C” grade includes scores above the state state average for a given year, but with no scores in the lowest fourth grouping. Also, at least three of the five additional performance indicators of growth, history proficiency, graduation rates, college and career readiness and acceleration are above the state average. The grade is characterized by “typical status” and “typical growth.”

An “F” grade represents scores in the lowest fourth grouping, with reading and mathematics growth also not above that group for the given year. The grade is characterized by “lowest status” and “lowest growth.”