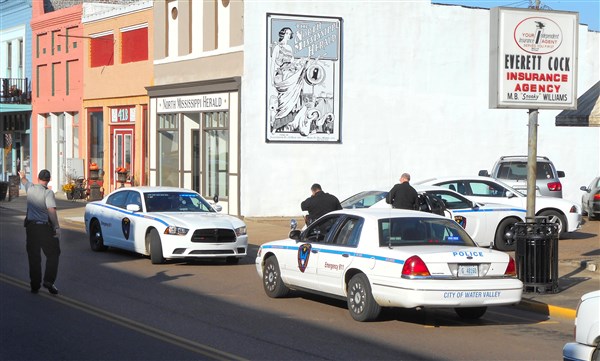 City officers arrived in force last Thursday after an officer scuffled with an intoxicated man on Main Street during an arrest. Scott Lexa was booked on several charges after he was taken into custody.

Lt. A.J. Hernandez was on patrol Thursday afternoon when he initially fielded a call about a subject screaming profanity at vehicles near Valley Lumber.  Hernandez reported when he first saw Lexa, the suspect was seated on the bench in front of Snip, Clip and Curl “engaged in full conversation with the Halloween straw woman.

According to Hernan-dez’s report, Lexa then staggered across the street near State Farm Insurance. When Hernandez parked on the north side of the building, the suspect tried to open his car door, telling the officer to “go ahead and take me to jail.” The officer reported Lexa became combative when he tried to pat him down for weapons, taking a fighting stance and accusing him of “trying to take my money when you lock me up.”

After not complying with the officer’s instructions, Hernandez sprayed him in the face with pepper spray. Before the spray could take effect, Lexa pushed the officer, who in turn grabbed him in a head lock and took him to the ground with a hip toss.

By that time, according to the report, the spray had also contaminated the officer’s eyes, prompting him to call for backup.

Meanwhile the disturbance attracted the attention of several people who helped Lt. Hernandez restrain Lexa until additional officers arrived at the scene.

According to Hernandez’s report, Nancy Rogers, Amy McCachren, Jim Varner and Lara Smith helped secure Lexa in handcuffs and place him in the back of the police cruiser. Hernandez also reported one of the citizens provided water to help flush the pepper spray out of his eyes.

“We appreciate the assistance in this incident, it’s nice to live in a community that supports their law enforcement officers,” King told the Herald about the incident.

King also reported the last two weeks have been slow, with his officers answering routine calls ranging from animal problems to domestic problems, along with the typical traffic enforcement and accidents. Monday’s Halloween activity was also slow as the chief said there were no problems in town.

• Investigated a burglary at Serenity Funeral Home on Martin St. on Oct. 20.  According to the incident report, entry was gained through the back door. A 22-inch flat screen television, a brief case with a small amount of cash and a sound system were reported missing.

• Responded to an attempted break-in at Dollar General on Central Street on Oct. 17. According to the incident report, there were some marks on the door but the perpetrator did not gain entry into the building.