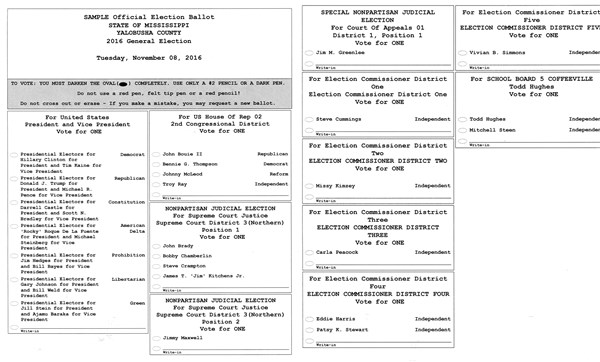 WATER VALLEY – Voters will head to the polls Tuesday to cast their ballot in the highly publicized presidential bid between Republican nominee Donald Trump and Democratic nominee Hillary Clinton and, if absentee voting is any indication, the turnout in the county may rival the 2008 presidential election when almost 70 percent of county’s voters participated.

“I’m looking for a big election, our offices have been swamped these last few days as anticipation builds,” Circuit Clerk Daryl Burney told the Herald, estimating that as many as 40 to 50 people are casting absentee ballots each day. Burney is projecting that at least 65 percent of the county’s almost 9,000 registered voters will cast a ballot in this election.

“There has been a lot of talk across the nation about the integrity of voting machines,” Burney said. “Our voters will continue to use a paper ballot, we have a paper trail and our machines are stand-alone, they are not hooked up to the internet,” Burney explained. The circuit clerk added that the new machines function the same way as the previous machines, scanning each ballot as they are inserted by the voter.

“We have stayed away from the electronic voting machines that so many counties have switched to,” Burney added.

Burney also said that the attorney general’s office may have an officer in the county observing the election. “They called to get the location of our precincts, I think Yalobusha is one of the counties the agency selected to observe as part of the continuous oversight across the state during elections.”

Absentee voting will continue until Saturday at noon at the circuit clerk’s offices in the Water Valley and Coffeeville Courthouse. In Mississippi, registered voters are eligible to vote absentee because of age, health or work demands, or their affiliation with the U.S. Armed Forces. For example, voters who will be outside their county of residence on election day are entitled to vote by absentee ballot.

“We have trained and trained for this election, I think everybody is ready for it,” the circuit clerk added.

Poll workers selected to work the election include: