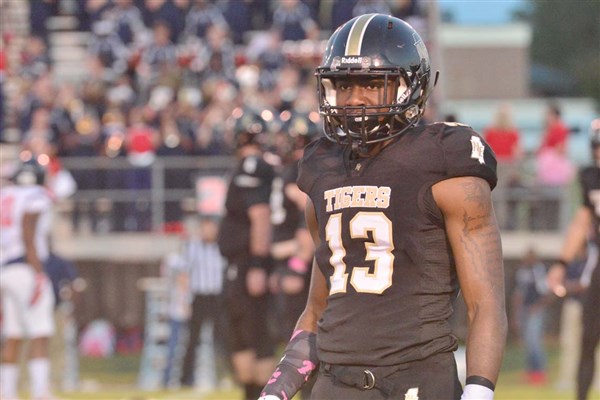 Hawkins was the Tigers’ top receiver for the seventh time this year, but his efforts were not enough in a 48-6 loss to Northwest Mississippi Community College in a top ten showdown on Thursday, October 27 at Bobby Franklin Field.

The Water Valley High School graduate had five catches for 36 yards, which were both more than any other wideout in the game. His numbers for the campaign increased to a phenomenal 60 receptions for 780 yards.

Hawkins averaged 86.7 yards per game and a first down each catch. His receptions total currently stands as fourth best in the nation and second in the Mississippi Association of Community and Junior Colleges (MACJC).

“I just stay focused on my repetition and on the little things I do,” said Hawkins. “I just want to thank God for blessing me and being able to do what I love. It’s been a great time.”

Northwest, which appears at No. 5 in the latest National Junior College Athletic Association (NJCAA) rankings while Northeast stands at No. 10, held the Tigers scoreless in the first half.

The Rangers meanwhile built a 24-0 advantage by halftime following a 56-yard interception return by Adonis Thomas plus offensive touchdowns from Marquisian Chapman and Tywun Walters.

Northeast (6-3, 3-3) started the second half strongly by forcing Northwest into a three-and-out on offense following a nice pass break up by Demarcus Rogers on third down.

The Tigers drove 60 yards in only 85 seconds on their ensuing possession to get onto the scoreboard. Mason Cunningham had nice first down passes to PaDarius Martin and Hawkins to keep Northeast moving down the field.

Cunningham then connected with a wide-open Cameron Montgomery on a 10-yard touchdown pass that cut the Tigers’ deficit to 24-6 with 12:06 remaining in the third quarter.

It was the fifth consecutive game in which Montgomery reached the end zone. He finished with a team-best 42 points accounted for with four receiving and three rushing scores.

Cunningham threw at least one touchdown pass in all nine contests this season. He accounted for 1,810 yards through the air as a freshman, which is more than any other Northeast quarterback in the last decade.

The Rangers (8-1, 5-1) completed their scoring with Drake McCarter’s second field goal of the matchup plus touchdowns in the fourth period from Alex Norwood and Turner Rotenberry.

Brenden Williams paced the Tigers defensively with a game-high 11 stops for his fifth double-digit tackling performance of the campaign. He had 89 takedowns on the year, which is more than any other Northeast player.

Johnathon Edwards grabbed his team-best third interception in the second quarter. He now has four takeaways, which is second most for the Tigers behind only Peyton McMahon’s five forced turnovers.

Edwards also accumulated eight tackles against Northwest. He has amassed 19 takedowns in the past two games alone after previously recording a career-high 11 stops versus Holmes Community College.

“Overall, we did our job and capitalized when we had chances,” Edwards said. “I’ve done all right, but there’s still a lot of room to work. It starts now. This is a great team and I’ve loved it.”

Brandon Tillman had a season-best 122 return yards for Northeast. Ladarius Townsend had a stellar outing as well with six tackles, including two sacks, to lead the defensive front.

“The effort has been outstanding and these kids have all had a role in what we’ve done this year,” said Northeast head coach Greg Davis. “Unfortunately in the last two weeks we haven’t been able to capitalize on all the momentum we had at one time. But I’m proud of each and every one of them.”