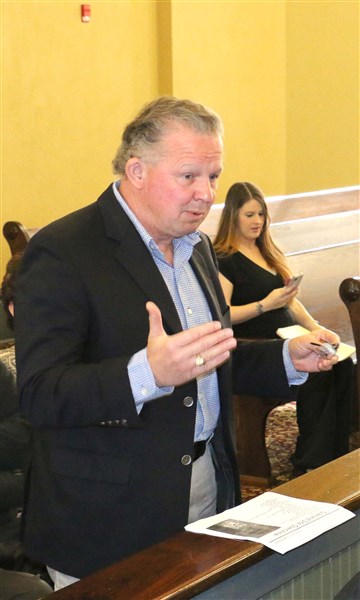 The general manager at Ajinomoto Windsor Foods in Oakland thanked county officials for their continued support for his company. He also provided statistics about employment and production at the Oakland plant. –Photo by David Howell

COFFEEVILLE –  “We’re international, right here out of Mississippi,” Ajinomoto Windsor Foods plant manager David Morris told county officials during an upbeat report about his company.  Morris was first on the agenda at the “first Monday” supervisor meeting in Coffeeville to thank county officials for their continued support, support that he said has been instrumental in the success of Ajinomoto Windsor since the company started operations in the county in 2008.

“All that we have accomplished this last year and in previous years could not have been done without your support,” Morris said. He also cited local support in Oakland and state support as instrumental in the growth since 2008.

“We really appreciate the investment Ajinomoto Windsor has made in our county, we know it is a competitive market out there,” Board President Cayce Washington said following the report, a sentiment that was shared by other officials at the meeting.

Other bullets in Tyler’s report included:

• The county will again host the North Mississippi Archery tournament at the Yalobusha Multi-purpose Building in Coffeeville on March 26-30.

• Work continues to develop a list of available land in the county that might be used for companies that are expanding or seeking to establish operations in the county.

• Communication continues with Caterpillar company officials in Oxford in an effort to help provide support for workers who live in Yalobusha County and will be unemployed in a couple of months when the company closes their Oxford location.

• Work continues to expand the Oakland-Yalobusha County Natural Gas District to the Tillatoba area. Tyler reported that county engineer Karl Grubb is communicating with MDOT engineers to develop details for installation of gas pipe along Hwy. 51 that will provide natural gas to residents as well as the commercial area at the I-55 exit at Tillatoba where the truck stop is located. Currently the gas district has $300,000 in state funding to expand the natural gas from Oakland to Tillatoba,  Tyler also reported that the economic development district is collecting names of potential customers in the Tillatoba and Scobey area.

• Work is underway on a new website promoting the county. Tyler reported a Jackson company has been contracted for the work.

• The economic development district is communicating with the Public Service Commission for assistance with acquiring contacts with potential companies to provide internet services in rural areas of the county not currently served.

“We are aware that there are areas in our county where internet is not available,” Tyler wrote in the report.