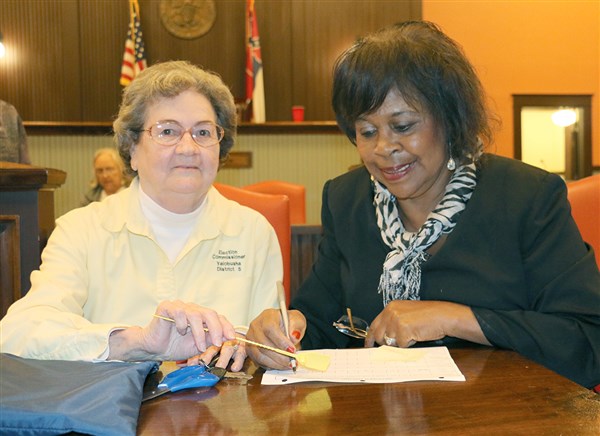 WATER VALLEY – After a close election for the District 5 position in the Coffeeville School District and an estimated 50 voters in two precincts not receiving the right ballot and unable to vote in last Tuesday’s school race, incumbent Todd Hughes and challenger Mitchell Steen have agreed to redo the contest in two of the four precincts where voters are eligible to vote in their race.

The decision was made last Thursday when the county’s five election commissioners voted unanimously to put the school race back on the Beat 2 – Water Valley precinct and the Beat 5 – Coffeeville precinct after validating complaints that voters were given the wrong ballot form by poll works in the two precincts.

In a second meeting held Monday at the Water Valley courthouse, both Steen and Hughes also signed off on the order to redo the race. Hughes had a six-vote margin – 247 to 241 – over Steen in the race. The new election will coincide with the Nov. 29 runoff election for the Northern District Supreme Court race already scheduled.

The results in the school board race from the other two precincts, Beat 1 South and Beat Four Coffeeville will stand because there were no problems with voters receiving the wrong ballot.

“How confusing will that be for the voters,” Hughes asked during Monday’s meeting, referring to the race appearing on the ballot in only two of the four precincts.

Circuit Clerk Daryl Burney explained that he had talked to Secretary of State’s office about the issue.

“If you have one county in the state mess up on the election, you don’t make the whole state do the election over, Burney explained.

“We have not had any complaints on Beat One South or Beat Four,” District 1 Election Commissioner Steve Cummings also explained.

“We want to make sure the voters feel like everything is fair. I want to win, but I don’t want to win if I didn’t win,” Hughes added.

Heavy turnout was cited by election commissioners in explaining some of the challenges in Tuesday’s presidential election with almost 6,000 voters turning out in the county.

“There was a long line, we probably won’t have that this time,” District 5 Election Commissioner June Byford explained about the election, adding that there was a lot of activity in the precincts at times that may have made it difficult for the poll workers to properly determine which ballot style the voter should receive.

Although the election commissioners are responsible for hiring and training polls workers during Tuesday’s primary, Burney faced scrutiny in Monday’s meeting.

“I am hearing a lot of scuttle,” Yalobusha Board of Supervisors President Cayce Washington said after stopping in the meeting briefly after the candidates left.  “I heard some people upset about not getting the right ballots and different things.”

“We need to know what you are hearing as well as what we are hearing,” Cummings said.

Washington also inquired if poll workers could wear badges to ensure the voting public knows who the proper election officials are. Later in the meeting, Washington provided more specifics, explaining there were some questions about people doing things that may not have been properly trained including Burney’s son and wife.

Byford added that Burney’s son asked for a key to a voting machine, adding that she wasn’t sure what the problem with the machine was.

“I have confidence in everything y’all do,” Washington added later in the discussion.

“We have got some good poll workers,” Byford added.

A final matter on the election came after Burney said he had fielded suggestions about moving one precinct out of the courthouse in Coffeeville to help reduce the congestion on election day.

“When you have a big election it is just too much traffic up and down the hallways,” Burney explained.

“The hall was a disaster,” Byford said earlier in the meeting about the activity in the courthouse last Tuesday.