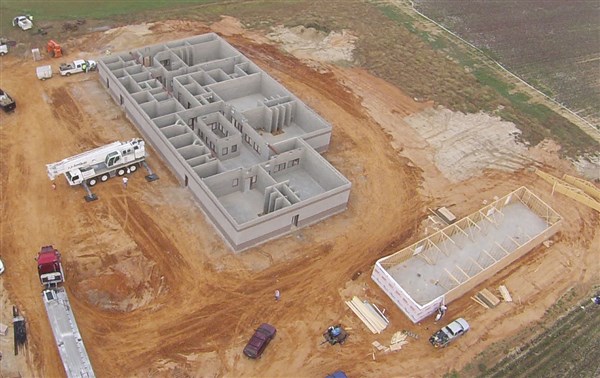 This photo taken in October, 2014, shows the layout of the building adjacent to the new jail (bottom right of the photo) during construction. The building is currently being converted from an open layout to offices for the new sheriff’s department. The building was intended to house state inmates, but the Mississippi Department of Corrections shuttered the program last April and it has been vacant.

WATER VALLEY – Construction is in the fifth week to convert an unused county building to the new sheriff’s department as part of a cost-savings plan implemented by supervisors earlier in the year.

The new building was constructed in 2014 on Hwy. 32 adjacent to the new county jail to house 20 state inmates as part of an inmate program with the Missis-sippi Department of Corrections.  Shortly after the construction was completed last year, the state ended the work program and the building has been empty.

Sheriff Lance Humphreys updated supervisors on his progress at the Nov. 7 supervisor meeting, reporting that his goal is to keep the cost of the work under $45,000. The county had previously solicited bids for the job that ranged from $57,000 to $75,000 before Humphreys agreed to oversee the construction in an attempt to save money.

Humphreys explained the $45,000 price also includes the installation of fiber optic lines, a price that the original bids did not include.  He also said inmate labor has helped curtail the price for sheetrock and flooring in the building.

“There has been a tremendous cost savings by allowing Lance to oversee the construction and using inmate labor,” Board President Cayce Washington explained.

When the department moves to the new location, the entire Carother’s Building will be used by the Mississippi Department of Human Services.