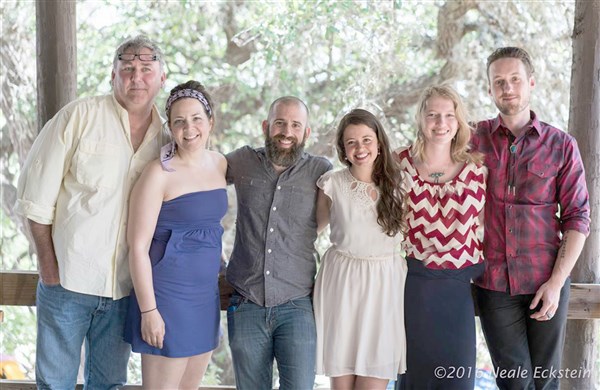 On Saturday, December 17th, at 7 p.m. Foster Music and Arts’ Old School Theater will present an intimate concert evening with not one, but six, award winning singer-songwriters from Texas’s legendary Kerrville Folk Festival.

The Kerrville Folk Festival is the longest continuously running music festival of its kind in North America. For 18 straight days and nights each May and June, over 30,000 guests attend this Mecca for singer songwriters. And every year, six 2016 New Folk Award Winners are chosen from over 600 entries submitted from North America, Europe, Australia and Japan by a panel of professional touring singer/songwriters.

Foster Music and Arts is pleased to present these six top-notch songwriters:

Joe Shields has been writing for eight years and performing for one. Besides being a singer/songwriter, he is also a cartoonist and animator. He has one CD.

Addie Brownlee has been performing and writing for over ten years. Addie has licensed her songs to films and commercials, toured with Martha Wainwright and has one EP.

Justin Farren is an acclaimed yet unassuming singer-songwriter from Sacramento, CA. The Sacramento News & Review describes him as “The storyteller with an impeccable voice, a guitar and a headfull of funny, tender and engaging observation.”

Emily Scott Robinson has been performing for 12 years and writing for three. She has one CD. She took a leap of faith this year moving into a motorhome with her husband to travel the country and play music full-time.

Rachel Laven has been writing songs for 14 years and performing for 20. She is about to release her second solo album, and has four previous albums with her family band, The Lavens.

Ben de la Cour has been writing songs and performing for 15 years. He has two albums. According to No Depression, “Ben de la Cour’s songs are brimming with urgent authenticity. There is thematic hardness and vulnerability throughout, but what distinguishes de la Cour’s songs from lesser guitar-and-anguished-vocals hacks is the raw humanity of his delivery and the potency of his way with words.”

The Old School Theater is a revitalized 250-seat school auditorium located inside the Melonvine Marketplace on the south side of Water Valley at 817 South Main Street. Foster Music & Arts regularly presents both national and regional music acts at the theatre with the stated mission of “cultivating the best live music in North Mississippi.”