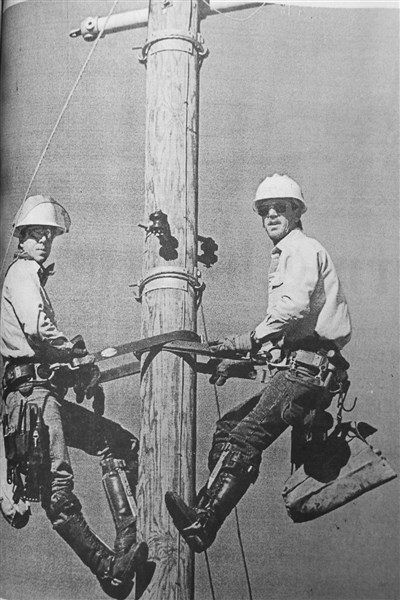 Andy Hall (left) and Thomas Scroggins, apprentice linemen for the City of Water Valley Electric Department, completed a TVA sponsored lineman climbing school in 1996, finishing near the top of the class The week-long course was held at Nashville State Tech, and included the basics of climbing and the proper use of climbing tools. Hall now serves as the city’s electric department head.

November Temps In ‘86 Were Coldest Since TVA Kept Record

10 Years—December 7, 2006
Pictured is Jesse “Ham” Hamby, looking down from his captain’s chair, while sweeping the street alongside City Park Monday morning. He had cleaned the streets Saturday after the Christmas parade—a job he has done since 1999.

The ownership of the baseball field, used by Water Valley High School, is still unresolved. The City had purchased the field in 2000 to obtain a grant. Since then ownership has gotten complicated but hopefully will soon be solved.

20 Years—December 12, 1996
Mr. and Mrs. Paul Parker were grand marshals of the 1996 Christmas parade, sponsored by the Tri-Lakes Fairground Association.

The Water Valley Area Chamber of Commerce is again sponsoring a lighting contest in the Valley.

30 Years—December 11, 1986
Christy LaSota was one of 16 flautists in the State of Mississippi asked to return for the second round of tryouts for the Mississippi Lions’ All-State band. Eighty flutes were in the first round to try out for the eight positions available.

The basic building of C. W. White, Inc. nears completion after delays because of inclement weather.

This November was the  coldest on record since TVA had been keeping records.

Mr. and Mrs. F. H. Rounsaville were to observe their 50th wedding anniversary on December 12.

Once again the Water Valley Jaycees and Jaycettes, in cooperation with the Water Valley Area Chamber of Commerce and the City of Water Valley, are sponsoring the “Wonderful World of Christmas.” This event combines a merchandising promotion, free entertainment, a Christmas parade, and the Christmas basket fund and Toys for Tots.

Tanya Bowen, daughter of Mr. and Mrs. Tan Bowen, will appear as “Little Mouse” in “How the Grinch Stole Christmas.” The show was to be presented in the Jeff Davis Auditorium. The production is presented by Water Valley School of Dance, under the direction of Debbie Knight.

Dave Walters of Coffeeville set out last Wednesday to get a bobcats that had been killing his chickens. He got the villain with one shot in the ear with a .22 hollow-point bullet. The cat weighed 15 pounds.

Harold Williams had one of two antique cars in the Christmas Parade, a 1928 Chevrolet Coupe. Riding with his dad was son, Grey.

Robert Anderson of Water Valley was pictured with the fist buck he ever killed.

60 Years—December 13, 1956
Sheriff Buster Treloar, assisted by City Marshal Forrest Barber and Deputy Sheriff Herron, destroyed an entire load of illegal beer and whiskey that had been taken during arrests since he became sheriff.

The Northwest Junior College Choir presented a Christmas Cantata in Water Valley First Methodist Church. Paul Shearer, son of Mr. and Mrs. Edward Shearer and a member of the church, was the bass soloist in the choir.

Yalobusha County Superintendent of Edu-cation Charles Crawford has offered a proposal to the State Education Finance Committee for the reorganization of Yalobusha County Schools. The proposal consists of the establishment of three consolidated school districts in the county, with centers in Oakland, Coffeeville, and Water Valley. The meeting is set for Monday, December 17.

In a full page ad for Wagner & Company it was suggested that you give a coat or suit for a Christmas present.