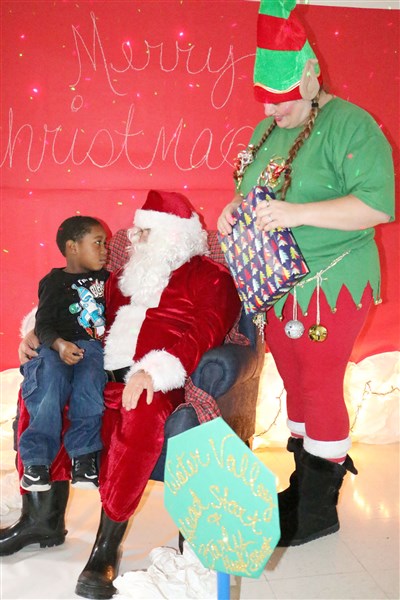 Santa Claus and his elves are making the rounds in the Valley including a stop Tuesday morning at the Water Valley Head Start to visit with each student. Santa’s lead elf for the project is Lee Ann Corey (right). – Photo by David Howell

NORTH POLE –  Santa and his elves are already making the rounds in the Valley, including a special visit Tuesday morning at the Water Valley Head Start to share Christmas joy to almost 100 students. The special visit marks the eighth year Trey Jordan has donned the red suit as the children line up for a special visit with Santa.

Each year Santa is accompanied by his elves, the hard working crew at Exxon Gas Mart who spearhead the gift gathering on Frostland Drive.

“My customers come in and donate the money to buy the gifts,” store manager and lead elf Lee Ann Corey explains. The work starts each year on the first day of November and continues for a month as customers donate money earmarked for the North Pole production to ensure each student receives a special gift during Santa’s annual visit.  The elves helping with the project this year also include Valerie Wright, Willis Goodnight and Tina McDaniel, who work together at the store. This year the gifts include games, puzzles, stuffed animals and many others.

“We want to thank all the people in the Valley who donated,” Corey added. She reported her customers look forward to lending a helping hand each year. It’s a project that has grown considerably from 2009 when Jordan was first asked to help with the Santa project. It was a first for him, but is a role he enjoys especially as each of his eight grandchildren were students at the center.

“Number eight, the youngest, is finishing up this year but I promised I would keep coming back as long as I can,” Jordan said.

“We started with coloring books and other small gifts,” Corey added. This year the elves were able to spend almost $6 per child, and Santa was quick to add that he gets the best bang for the buck at Five Below in Oxford.

“It’s like a dollar store on steroids and Santa loves that,” the jolly fellow explained. After completing the rounds Tuesday, Santa noted that he has another stop scheduled before Christmas at the Exxon Store on Dec. 21 from 9 a.m. until 1 p.m.