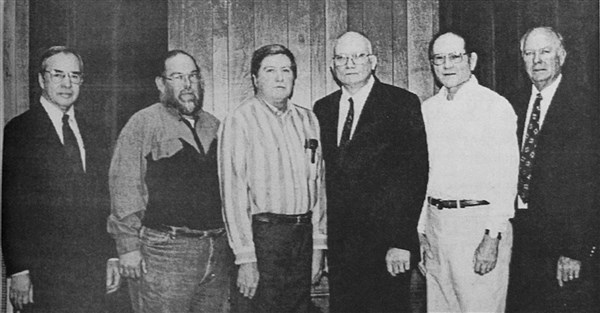 10 Years—January 4, 2007 – The flag was flown at half staff at all city, county, state and federal institutions in the Valley honoring former President Gerald Ford who died December 26, 2006.

Several candidates had turned in their qualifying papers to run for county offices at the circuit clerk’s office Tuesday, the first day for qualifying. The qualifying period ends March 1.

Sales tax collections were down five percent for the month of November, compared to the same month the previous year.

Deer kills reported this week were: Hayden Aston, 9-year-old son of Jeremy and Kerry Sumner, killed his first deer, a four-point, with a .410, while  hunting in the Sylva Rena Community; Ginger Pullen killed her first deer, a 7-point buck, on her “Grampy” George Brandon’s land in Yalobusha County; and Matt Jones, son of Ricky Jones, killed a 10-point buck, hunting in Yalobusha County.

Scott Parsons, son of Mr. and Mrs. Richard Parsons of Vance, was named Agricultural Legislative Assistant to U.S. Representative Charles Pickering. Scott is a grandson of John Throop and the late Mrs. Carlisle Throop, and Mr. and Mrs. Oscar Parsons, all of Water Valley.

Matt Burrowes killed his fist deer, a 10-point buck, while hunting with his dad, Kenny, southeast of Water Valley.

Water Valley Manufacturing named Beverly Walker their December Employee of the Month. She had 17 years of continous service with the company.

30 Years—January 8, 1987 –  The Garden Club of Water Valley selected the home of Mrs. James E. Larson as their January “Yard of the Month”.

Joe Elliott announced he was a candidate for Superintendent of Education of Yalobusha County. Lloyd Defer is running for re-election as sheriff and Steve Riley is seeking re-election as Justice Court Judge for District Two.

Allen Dickey has been named Holley’s December “Employee of the Month.”

Air Force Major Harry Bethel received a promotion to Lt. Colonel. He is the son of Mrs. Jean Bethel of Memphis and a nephew of Mrs. Ricard Baddley of Water Valley.

40 Years—January 6, 1977 – Alfred Reed, Jr. will succeed Clovis E. Steel as Superintendent of the Water Valley School System, effective at the end of the scholastic year.

All citizens of Water Valley (both those living in the city limits now and those who will be in the city after the annexation) need to register to vote.

Mr. and Mrs. Johnny McDonald celebrated their golden wedding anniversary at an open house in their home at 910 North Main Street.

50 Years—January 5, 1967 –  Yalobusha County was named the 24th county in Mississippi as an exclusive Mississippi Action for Progress (MAP) Area for the development of Head Start Programs.

Capt. John B. Stone of Coffeeville was a key figure in an aerial dogfight between U.S. planes and Soviet built Migs over North Vietnam. Seven Migs were shot down without a single U.S. loss. Capt. Stone is the son of Yalobusha County Attorney J. P. Stone.

Bill Allen of Tupelo, one of 50 houseboys now serving in Ole Miss sororities, was pictured accepting his pay (his meals). He was assigned to Phi Mu and among sorority members serving Allen a meal was Patti Axelrod of Water Valley.

Mr. and Mrs. John Strickland observed their 50th wedding anniversary at their home on December 24.

Dependents of Naval servicemen and veterans will become eligible for medical care after receiving a Medical Care Card.

Seven members of the Bethlehem Home Demon-stration Club, along with their 10 guests and Home Agent, Miss Cochran, enjoyed a Christmas party in the Extension Building on December 20.

Mr. and Mrs. Bill Larson of Memphis entertained a number of Vallians in their home.

The annual Christmas reunion of the M. F. Elliott Family was held at their home with children, grands and other guests attending.

70–Years—January 2, 1947 –  In the annual “Babson Report” it was predicted that there would be higher basiness levels in 1947, but foreign troubles would be greater.

Bob Jones, candidate for Sheriff of Yalobusha County, was the fist to announce that he is running. The headline stated that 1947 would feature politics with offices from constable to governor involved.

The new 1946 Homestead Law is much more liberal. Should you qualify for a 50 percent exemption you will receive a full exemption up to $1,000 valuation of your home.

Former Vallian Wert Turner Harvey, a professor of piano at the University of Texas, will present a recital, sponsored by the B-Natural Music Club.

In the Personal Column it was reported that Miss Jessie Wagner left Tuesday for New Orleans, where she joined her sister, Mrs. Frazer Hood. They would travel by plane to Guatemala where they will spend several weeks.

How The Grinch Stole Thanksgiving