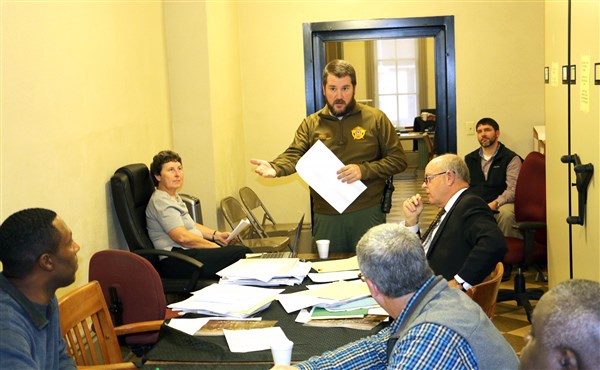 Sheriff Lance Humphreys told supervisors Tuesday that his department is in dire need of a new vehicle, adding that two vehicles currently in use have between 250,000 and 300,000 miles on the odometer. His request was tabled until January 23 to allow research on funding options for the potential purchase.

COFFEEVILLE – Sheriff Lance Humphreys made a request that turned into a plea to purchase a new police car to replace one of two aging cruisers that have over a quarter-million miles on the odometer currently in use in his department. The request was made at Tuesday’s Board of Supervisor meeting in Coffeeville.

“Every week we are pouring money into them for repairs,” the sheriff explained during the discussion on the matter that included funding options before his request was tabled for discussion in a recessed meeting scheduled January 23.

Humphreys explained that a final annual payment was made last month on a 2013 Dodge Charger, and the first annual payment on the new car could be made in December with money from his 2017-18 fiscal year budget.

“I would pay for it out of the same line item that we are making payments right now,” the sheriff explained.

“My biggest concern is I don’t want to get in a situation where you are over budget,” Board President Cayce Washington countered, adding that the sheriff’s department received a $50,000 budget increase for the current fiscal year that started in October after he was over budget the previous year.

“Everybody made concessions during budget time,” Washington continued, referring to cuts made in other departments to boost the sheriff’s budget.

“We want to give you the tools you need to work with because we don’t want the outlaws taking over the county and I appreciate all that you do and I know you have to have transportation,” Washington added.

Humphreys reminded supervisors that the vehicle the new car would replace was purchased used from the Missouri Highway Patrol and desperately needs to be retired.

“If I don’t have a vehicle, we can’t patrol,” Humphreys added.

“I am in favor of you getting the transportation you need,” Washington continued.

“Can we do it a little later in the year?” District 2 Supervisor Ken Booker asked as the discussion continued.

“I have two vehicles that are junk. One of them I am trying to replace has been totaled out twice… I have three people sharing one car right now,” Humphreys countered.

Washington identified another potential funding source for the vehicle, pointing to the cost of the recent renovation on the new sheriff’s department that came in more than $20,000 under budget.

“We had $70,000 already set aside for this work and the cost for renovation was around $45,000,” Washington said. “There may be some money there that we could use toward a vehicle. What I hate to see us doing is borrowing and spend, borrowing and spend, I would like to see us get out of that,” Washington explained, adding that addressing the issue during the Jan. 23 recessed meeting would give supervisors time to look at different options.

“My thoughts are if somebody is breaking in my house in the middle of the night, I want somebody to be able to get in a car and get there quick. I think it is one of those things we are going to have to do and figure out how we are going to pay for it,” District 3 Supervisor Lee McMinn said.

Humphreys also told supervisors that adequate funding to purchase vehicles has been an issue since he took office over a decade ago.

Last February, when he received authorization to purchase a 2015 Dodge pickup, he explained that money his department receives from the U.S. Corps of Engineers has traditionally been used to help purchase vehicles.

But since the recession in 2008, funding to purchase patrol vehicles has been reduced, according to the sheriff.  That’s because in the aftermath of the recession, money the Corps paid the sheriff’s department to patrol recreational areas at Grenada and Enid lakes was substantially cut.

After cut, Humphreys said his department was budgeted to spend $5,600 annually on patrol cars, an amount that will fund one new car every four years.  The cut meant that after three new vehicles were purchased in 2007, only four new vehicles have been purchased since then. During that gap, Humphreys purchased several used vehicles, and received a donated car from the Warren County Sheriff’s Department. Speaking last February, Humphreys also said the Board of Supervisors have supplemented his budget a couple of times to help with the purchase of the used vehicles, including shifting a used pickup to his department from the District 3 road crew.

He also explained it takes eight vehicles to outfit his department, and purchasing  one new vehicle a year would rotate the entire fleet every eight years.