Four Oxford man purchased this trailer park located at Gore Circle in Water Valley and have plans to add additional units on a 20 acre tract of property. The property for the development extends south of the current trailer park, east of Larson’s shopping center. 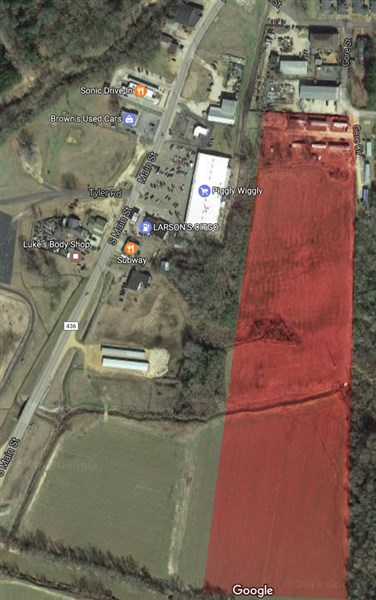 WATER VALLEY – A group of Oxford men have purchased a mobile home park in Water Valley and plan to expand on adjacent property into a much larger park. Several neighbors in the Blount Street area first learned last week of the proposed development on a 20-acre tract of property adjacent to the existing mobile home park at Gore Circle that has eight units.

On Friday, Hayden Alexander confirmed to the Herald that Golden Wing, LLC, purchased the property last year with plans to create an affordable, safe, and family-oriented community with the development. The investors fielded questions from the Herald via email about the development after Alexander requested his partners – Turner Barnes, Andrew Ross and Josh Matthews – have joint input for the story.

“First of all, we want the Water Valley community to know how excited we are at Golden Wing, LLC to be part of their community,” the group explained in the email Tuesday morning. “We would like the citizens of Water Valley and Yalobusha County to know that we feel like this area is a great place to live and raise your family. Our desire is to be an asset to the community by providing affordable housing. We also would want our project to be a place where everyone would want to live.”

The email also stated that plans are to purchase brand new units from the manufacturer for the development.

“Again, our goal is to create an affordable, yet safe and family-oriented community,” the email stated.

In regard to the existing units already on the property, the group stated they are making some upgrades to the ones they own, also explaining that some of the units are owned by the residents.

“We are also getting new leases out to all the current residents,” the email states.

The group did not speculate on the total number of mobile homes that will be included in the development, or a time frame for the project.

“We are going to take our time and do this project the right way, so estimating a finish date is not possible at this time,” the email reported. And for the number of units, “There are many conversations that need to be had with city leaders and county leaders about the planning process, as well as what we need to do to fulfill our goals.”

According to the county’s tax map, the acreage includes eight existing trailers, formerly known as Morris Trailer Park, that span roughly half of four acres purchased by the investors located inside the city limits. The property purchased by the group also includes 16 adjoining acres located outside of the city limits in the county. The long strip of property runs north and south, behind Larson’s shopping center, extending south to O’Tuckolofa Creek.

Mayor Larry Hart told the Herald Tuesday that he has not been approached by any of the developers.

The portion of the property located inside the city limits is zoned R-4, Special Residential, which permits mobile homes within guidelines spelled out in the city’s Zoning and Development Ordinance, according to City Code Enforcement Officer Billy Humphreys.

The 16 acres in the county is not subject to land use restrictions, as the county does not have an ordinance restricting subdivision development or mobile home parks.

But it’s a topic that is expected to be on the agenda at Monday’s supervisor meeting at the request of District 3 Supervisor Lee McMinn.

“Since the news came to light about this proposed expansion of the mobile home park into the county, and with the number of calls we have had concerning this, I think it would be prudent for us to look at some type of minimum ordinance that we could possibly implement for future reference,” McMinn told the Herald.

Board President Cayce Washington also said the topic will generate some discussion about long range planning for property in the county, starting at next Monday’s meeting.

“I think you are going to hear a discussion on at least developing minimum standards for new subdivisions and mobile home parks,” Washington told the Herald. But he noted that if some type of land-use regulations are implemented in the county, it would not affect this project.

“That would not sit well,” he explained, referring to enacting a policy geared for a specific project after it was already in the works.

“We have to be respectful for landowners to do what they want on their own property, but at the same time make sure what they are doing is not affecting others on their property,” he added.

As for this particular development, Washington said that effectively managing the property is important.

“I think that if it is managed well, it could be a good thing. But it if is not, it could go south in a hurry,” he added.

Washington also said he would like to meet with the investors to help understand their intentions on the property.

“But they don’t have to provide an explanation,” Washington added.

Humphreys explained that if any new mobile homes added in the city are in the flood plain, the property will have to be built up 18 inches above elevation. Yalobusha EMA Director Frank Hyde reported the county ordinance is similar to the city.

“They will have to go through the flood plain permitting process in the county,” Hyde said. “Nobody has come to our office at this point.

“Trailer homes are great if you put them on an acre or two, it’s an inexpensive roof,” Water Valley Main Street Manager Mickey Howley told the Herald. “But this is going to be rentals, compacted together. At no point are they addressing a true economic need. Trailer parks are effectively the payday loan of housing.”

Howley pointed to the location, which could jeopardize property values and the aesthetics of the town’s rich heritage.

“This (development) is 300 feet from our Main Street and about 500 feet from the edge of our Historic District,” Howley added.  “It’s also within 600 feet of 25 historic residences in the Blount Street/McLarty Street. “You will see property values decline, which will affect the county’s overall tax base. And for the city and the residents, it’s a lose-lose. We should reject it.”

While the area in the city would not have to be rezoned for a trailer park, Howley pointed to the precedent already set by city officials during the last decade regarding requests for rezoning or variances to allow mobile homes or multi-family residences to be put in areas of the city not zoned accordingly.

One example cited by Howley was in July, 2015, when aldermen rejected a request to rezone 15.265 acres on the western edge of the city from single family residential to multi-family residential for potential development.

“The city has put a very strict moratorium on mobile homes, they have been asked to rezone property to allow a mobile home several times by people who live here and they have not granted any exceptions. It smacks of an injustice that people from out-of-town would come in with a mobile home park of this magnitude,” Howley also told the Herald.

A Blount Street resident, Anne Burke, also has questions about the development.

“Seems strange that a development this size has been in the planning stages for several months and only a handful of our officials know about it,” Burke told the Herald. “104 rental trailers on 20 acres will have a considerable impact on Water Valley infrastructure, schools and emergency services,” she added.

Burke also said she had researched the county’s land use requirements.

“The county supervisor I spoke with told me that there are no regulations in the county.  Anyone can build anything they want.  That’s the county’s defense.   The city’s stand is  ‘it’s in the county, not the city’ we can’t do anything about it.   So, we the citizens of Water Valley are in a position where the men we elected claim they are powerless to stop a development that has a long list of costly problems we will be absorbing,” Burke continued.

“I’m curious what good this will do for anyone other than a handful of people who are gaining financially from this deal.  It’s the perfect scenario for four  “businessmen” to build a cash cow (after striking out when trying to put it in their own backyard) in our town.    The argument of ‘there’s nothing we can do since it’s in the county”’ was predictable, expected and flawed.   The only two streets into the proposed area are city streets.    Are we going to furnish water/sewer and, if so, how do we afford laying down lines to 104 sites?    What impact will this have on the schools?” she added.

“This development might be legal but not necessarily right,” she continued. “If our elected officials cannot or will not stop this we need to find some candidates who are better able to look out for our interests and not the interests of Oxford businessmen looking for a cash cow.”