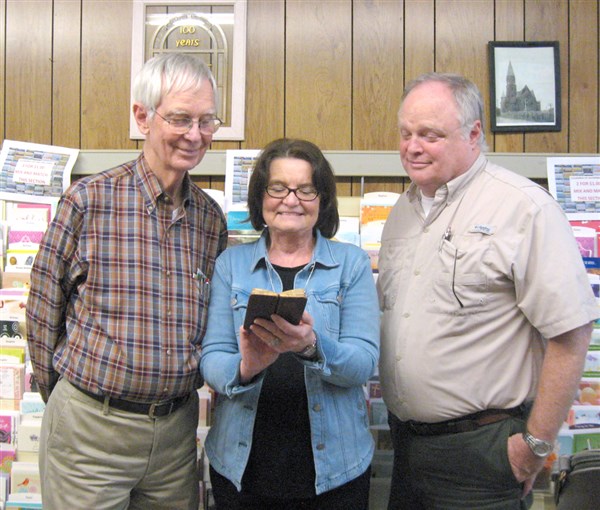 Canadian business consultant Dixie Motley Cameron shows a 1882 Methodist hymnal she recently received from her father to Binnie Turnage (left) and Bobby Turnage (right). She worked for two months at the pharmacy, helping update the accounting system and providing a new look for the store’s giftware. – Photo by Lucia Holloway

WATER VALLEY – When business consultant Dixie Motley Cameron of Belleville, Ontario was sent by her Chicago-based firm to Water Valley, she was assigned to make recommendations for Turnage Drug Store owners who had hired her services. During the two-month process she has updated accounting systems and provided a new look for giftware.

Many Water Vallians were curious as to why a Canadian was  named Dixie. A question not surprising to her since Canadians also ask how she came by that name. She explained that her father, Wilfred, and his bothers noted that Bing Crosby’s wife, Dixie Marlene, died on the same day in August when she was born. They suggested that the name of Dixie Marlene would be a good choice for the baby.

Her lasting impression of Water Valley involves “a spirit of community and inspiration that Turnages offers from coffee and devotionals at 7:30 each morning ’til they close in the evening,” she explained. “Everyone is treated with dignity and respect. You don’t find that sentiment everywhere.”

Since she covers both the USA and Canada, she speaks with first-hand knowledge. “The people here are kind and wonderful,” she continued. However, adapting to the differences in weather conditions between her home in Canada and  Water Valley are dramatic since she experiences the variations of extreme cold and warm temps frequently.

On one of her recent trips home, a nine-hour journey that she makes most weekends from Memphis to Toronto, plus drive-time to airports, to visit her 94 year old father, he gave her a special gift, her grandmother’s sewing box.

In it, she found a “Primitive Methodist Hymnal”, a tiny 2”x5” book printed in 1882 in London. The volume, a revision of an early 1825 edition, was edited by one of the denomination’s founders. Since simple melodies were sung during those early days, only the words of hymns were included. The  majority of the lyrics were penned by Charles Wesley or  Isaac Watts and many of their hymns are found in church hymnals to this day.

Because Dixie and the Turnages share a Methodist heritage, she brought the hymnal for them to examine and to show to many drugstore patrons who were interested in the tiny leather-bound book.

Friendship bonds made by Dixie in Water Valley will be cherished by many Turnage Drug Store customers when Dixie completes her job here on Thursday and travels to her next assignment.

“I do love my career of meeting new friends in many different parts of our countries and feeling that I have made a difference in their businesses,” she concluded.