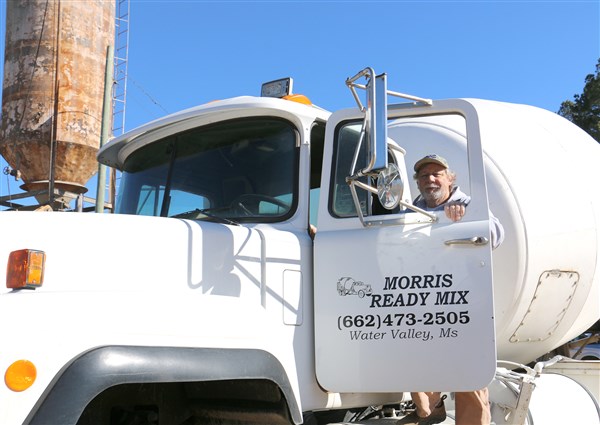 Ricky “Monk” Morris shows the latest edition to his fleet at Morris Ready Mix, a Mack concrete truck. Morris dispelled rumors that he was involved in the sale of the trailers and adjoining acreage next to his plant for the proposed trailer park expansion that has the town in an uproar.

WATER VALLEY  A longtime business owner in Water Valley, Ricky “Monk” Morris, dispelled rumors about his involvement in the sale of a mobile home park to four Oxford men who plan to expand. Morris told the Herald that some people in town are under the mistaken impression that he was involved in the sale of the trailer park on Gore Circle that has been called Morris Trailer Park for decades. Morris added that he has not been affiliated with the trailer park since his mother died in 1998.

“I got the ready mix plant in 1999, the trailer park went to my brother, Gary,” Ricky Morris explained. “He sold it over a year ago.”

Now with the recent publicity about the development, Morris said he is fielding questions and even criticism about his perceived involvement in the sale of the trailer park.

Morris also explained that his brother, Gary Morris, sold the trailer park in 2015 to  Josh Thweatt and a partner.

“They were buying it as an investment for their retirement,” Ricky Morris explained.  He also said that they owned the park less than a year when they got an offer from the Oxford investors that was too good to turn down.

In the last few days, Morris also said several people have also approached him asking why he sold Morris Ready Mix, apparently another rumor that is circulating in town.

“I haven’t sold anything to these guys,” Morris explained. He did report that one of the men contacted him back in October about hauling 5,000 yards of dirt.

“At that time I didn’t even know where the dirt was going, all they said was my price was too high,” Morris explained.