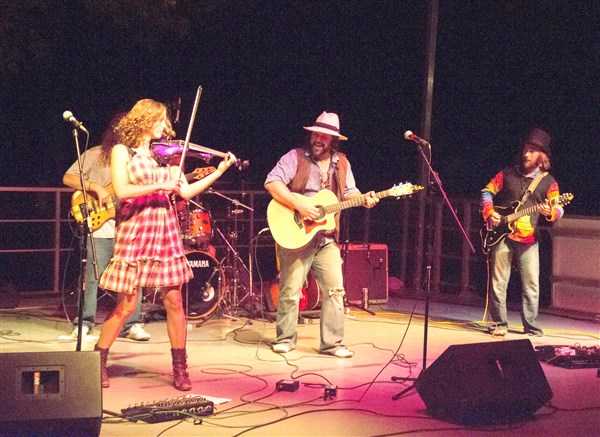 On Saturday, February 11, at 7 p.m. Foster Music and Arts’ Old School Theater will present a concert evening you won’t soon forget with one the finest bands in North Mississippi and beyond – The Blackwater Trio.

The Blackwater Trio is made up of Seth Stroud (guitar, lead vocals), Walt Busby (lead guitar, vocals) and Alice Hasen (violin, vocals). All three are fantastic singers  and their three-part harmonies are prominently featured in both their originals and their choice of covers. Much in demand, the Blackwater Trio plays the area frequently, but it is rare to see the full five-piece band version, and rarer still to see them present a predominantly original concert in a room where you could hear a pin drop.

Walt Busby began his music career playing the saxophone for his school band, but somewhere around the age of 13 he picked up his dad’s guitar and taught himself to play by jamming with all sorts of people. After high school he found himself making a living utilizing his  musical talent working with touring artist Jax Nassar as her second guitarist, playing from the Mississippi Delta to California. After getting off the road, he worked as house sound engineer at Ground Zero Blues Club, where he played a huge role in keeping Seth Stroud playing music after his move back to Clarksdale in 2013.

Seth Stroud is the son of a Baptist minister, so music has always been a part of his life. His early time on the piano soon gave way to his love of the guitar. At 22, Seth left Mississippi for Nashville and for the next 10 years built a name for himself as an entertaining front man and capable singer in a variety of genres. Then, after returning to Clarksdale, he met fellow Blackwater Trio member Busby, who shared his love for harmony and soulful music. They began booking themselves as a duo and soon after Alice Hasen joined on the violin, adding the final piece to what would become the Blackwater Trio

Hasen is by trade a band director and music instructor. She was the Principal Second Violin of the Yale Symphony Orchestra and has been concertmaster of several smaller orchestras. Her travels in music have taken her to China, Turkey, Germany, and include two performances at Carnegie Hall. She is a dynamic musical force on stage and a joy to watch.

Professional musicians know that truly great bands are few and far between. You can be a good musician and play in bands your whole life and still only touch that perfect organic combination of skill, personality, stage presence and vision once or twice. When you look at the Blackwater Trio, that’s what you see.

The Old School Theater, located inside the Melonvine Marketplace on the south side of Water Valley (817 South Main Street), is a revitalized 250-seat school auditorium with a brand new stage and lights and sound. Foster Music & Arts regularly presents both national and regional music acts at the theatre.

All Foster Music & Arts shows at the Old School Theater are sponsored by The Caryl Company and the Melonvine Marketplace. Turnage Drug Store of Water Valley supports all of the FMA shows with free ticket giveaways.

In addition to the Blackwater Trio’s set, Water Valley mainstay Lawton Gafford, one of the finer singer-songwriters in the area, will kick off the evening with a short set. Showtime is 7 p.m. and the doors open at 6:30 p.m.

The show is general admission, tickets are $12  and can be purchased at the door on the day of the show with cash. Tickets can also be purchased with a credit card online at  fostermusicarts.com.