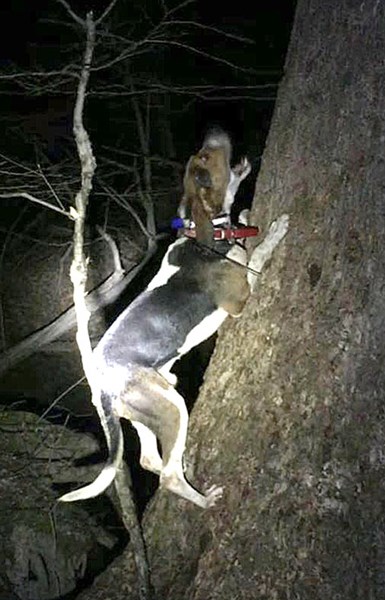 Hunters participating in this weekend’s UKC Winter Classic will be spread out for hundreds of miles, reported Ronnie Stark. The hunts will be held on public and private property including areas in Yalobusha County.

BATESVILLE –With a record 1,039 coonhounds headed this way for the UKC Winter Classic Friday and Saturday at the Batesville Civic Center, arrangements are being made to access more hunting land and line up more guides than ever before.

“The UKC has never had this big a hunt,” said Ronnie Stark, a coon hunter from Water Valley who coordinates the guides, reaching out to hunting clubs across North Mississippi.

“They’ll be hunting from Mariana, Ark., to Fulton, Miss.,” he said, on both public land and private, with permission.

The Winter Classic is in its fifth year in Batesville, having moved here from Georgia in 2013. This is the 30th annual Winter Classic, open to seven coonhound breeds whose owners and handlers will travel here from as far away as Canada and California to follow their hounds through the winter darkness in Mississippi woodlands in search of raccoons. They’re armed with flashlights for spotting the ringtails, not guns to shoot them. In fact, firearms are not allowed.

The hunters are divided into four-member casts, each with a guide who is the official keeper of points awarded to individual dogs for tracking and treeing coons.

The nite (sic) hunts are timed at two hours. Hunters return to the Civic Center to turn in their scorecards.

In addition to the nite hunts, the Winter Classic also includes two days of bench shows, where dogs are judged on physical attributes and conformity to breed standards.

Admission for spectators is free. The bench shows begin around 9 a.m. both days. On Saturday morning children are invited to participate in the Kids Bench Show. Coondog owners on- site are generally happy to lend a dog for this event. Vendors of dog and hunting supplies, clothing and other related items will offer their wares in displays around the Civic Center arena all weekend.

Awards for the hunts will be presented on Sunday morning.