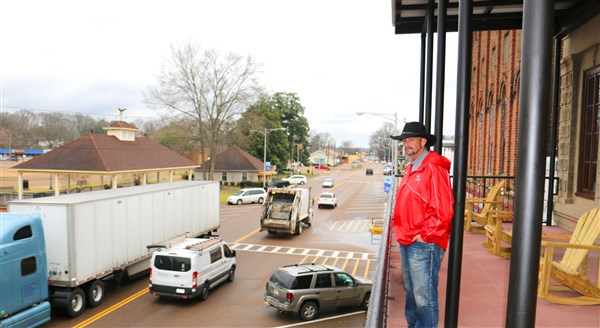 Terry Warren believes the Main Street charm, especially from the second-floor balcony of his renovated buildings, will be a huge factor in luring an upscale restaurant to town. He also thinks the town’s beer ordinance may hamper his ability to market the locations for a new restaurant.

WATER VALLEY – A lengthy restoration for a pair of Main Street buildings has reached the end of the first phase. Water Valley native and Oxford businessman Terry Warren purchased the Wagner buildings in 2015 and started work on the buildings that has been underway intermittently for almost two years. Last week Warren reported the properties are available for rent and the final interior build-out will follow based on a future renter’s specifications.

“I sent everybody home, we won’t start back until I have a renter ready to occupy the building,” Warren told the Herald.  The restoration included substantial foundation work, a façade renovation for both buildings, an upstairs balcony that stretches the length of both buildings and countless small details including $20,000 in new glass.

The building is currently on the market for a renter, for any reputable business. But Warren is quick to point out that the adjoining buildings that encompass almost 10,000 square feet are best suited for an upscale restaurant and bar.

“I can’t see anything in Water Valley that would be more positive than a nice restaurant, something similar to the Como Steakhouse,” Warren explained.  He also notes it will likely take the revenue that only a successful restaurant could generate to make the project cash flow because the price for the entire project may reach seven digits.

“There is nothing that I can think of that is going to generate the traffic as a restaurant and bar, but I am certainly open to any suggestions from city officials or the public,” Warren said.

Warren also explained that the project was an investment in his hometown.

“This has never been about money for me, I want to help the community. This is my hometown, and I don’t want anything there that makes the community unhappy,” Warren explains. “I have put my personal money in this project, I want the town to be proud of the buildings. I dedicated this building to the Warren family, especially my father, Gene Warren.”

Warren’s purpose for visiting the newspaper last Thursday was to revisit a problem he believes will hinder him from finding someone to operate a restaurant in the buildings.

“The town’s beer ordinance is the problem,” Warren explained.  “I can envision an upscale restaurant and bar, with food being the priority, but you will have to serve a full array of alcohol to make it. “

His primary objection to the ordinance, cited in Section 7, requires beer or light wine to be served in anticipation of a meal. This restriction, Warren believes, is unenforceable, both for the waitress taking an order for a customer’s beer and for the city’s enforcement to ensure a restaurant is in compliance.

“Can you imagine what a franchise restaurant like Chili’s or Applebee’s would say if they wanted to open in town, the ordinance requires that you screen each customer who orders a beer to make sure they order a meal,” Warren explained. “And what do you do if they order a beer and change their mind and don’t order a meal?”

Warren’s suggestion is to rescind the beer ordinance and operate under state law, regulations he believes have plenty of teeth for enforcement.

“State law already has adequate regulations governing the percentage of food and alcohol a restaurant can sell. The way the ordinance is written, the mayor, aldermen of police department could shut you down, “Warren continued.  “I have had several people look at the building, but when they see the ordinance, the way the beer law is written, they see the city has complete control. That makes the investment too risky for them.

That said, Warren also acknowledges that Water Valley Mayor Larry Hart and the town’s aldermen have been supportive during the restoration.

“I will say that the mayor has been very accommodating, very thoughtful. The mayor has explained to me how we can work within the current law, but I am not the one who will be operating it,” Warren continued.

Warren explained that he never had plans to actually operate a business in the buildings. “I don’t have the time, “ he told the Herald.

“I have had several people look at the building, but when they see the ordinance, the way the beer law is written, they see the city has complete control. That makes the investment too risky,” Warren told the Herald.

“I would do everything to help someone succeed if they are interested in this space. I would offer flexible terms during a start-up period for the right restaurant plan,” Warren continued.

“Now it is time for the mayor and board of aldermen to decide if they want to move forward or not. I have done my part, now it is up to them,” Warren explained. “I think a new restaurant would be a destination point that would bring people to town, it would help other businesses here. I think the law is designed to keep problem areas out, but in this case it could keep a restaurant out. This needs to be tweaked and it could work for everybody.”

The city’s original beer and light wine ordinance was adopted in 2007 following a county-wide vote making the products legal to sell and possess. The ordinance was amended in 2014 after a potential restaurant operator requested a waiver on the 150-feet distance requirement between a church and restaurant serving beer.

The revised ordinance included the distance waiver, if the church is in support of the restaurant, on a case-by-case basis.  It also included other revisions, as the original 2007 ordinance grew from 3,081 words to 4,901 words and included prohibitions against pool and billiard tables, required both male and female restrooms in restaurants that serve alcohol, increased reporting requirements to document the percentage of revenue generated from beer and food, and required food to be served in a restaurant simultaneous with a beer.

The beer ordinance was tweaked again in the early months of 2015 following input from the public. The changes included allowing beer to be served in anticipation of a meal rather than simultaneously with a meal.