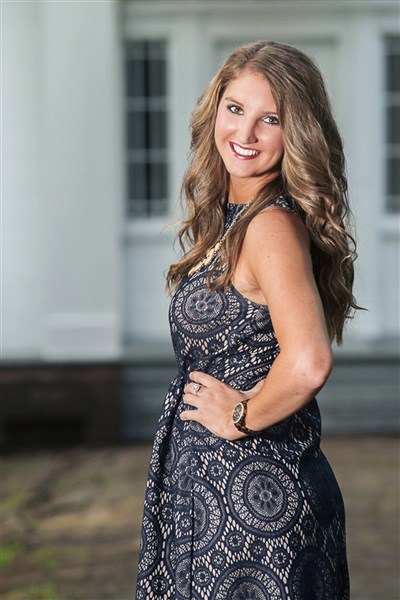 Ole Miss freshman Ally Avant is adjusting to college life after graduating at the top of her class in 2016.

THE OUTSIDER
by Justin Geurin
Well, after taking some time to focus on moving my dissertation along, The Outsider is back with new life for 2017! Glad to be back and here we go!

One of the absolute best parts of serving as an educator is getting the time to sit down with students one-on-one and simply talk to them. You get the chance to learn who they are as a person beyond the classroom, what they like and dislike, and what goals and aspirations they may have. Last week I was thrilled to get the chance to catch up with a former student, Ally Avant.

You all know Ally, the valedictorian of the WVHS class of 2016, who excelled both in the classroom and on the fields and courts of athletic competition. Now, Ally, like many of her classmates from WVHS, is taking on a new challenge as a college student. Now beginning the second semester of her freshman year at The University of Mississippi, I wanted to check in on Ally and see how she was adjusting to a new life. To put is simply, she is thriving just like we all would have expected!

To begin, Ally was extremely complimentary of her experiences growing up in Water Valley. “I was very blessed with good friends and a small community who all invested in me,” she says. She described how her core beliefs, from her education, aspirations, and religious beliefs, were all shaped by the Water Valley community. For her, the best part about growing up here was having a group of friends she had known her entire life. “I have had the same friends all my life, we have seen the best and worst of each other, and that means so much to me.”

Ally was also very complimentary of the Water Valley School District for preparing her to take the next step after high school. She said, “I had so many good teachers who invested in me, as well as a good group of students who were competitive and pushed each other.”

According to Ally, she truly bought in to what her teachers said to her each day and made every attempt to push herself to succeed.

When it came time to decide where to attend college, she originally wanted to attend Mississippi College, as she knew several friends who were going there and she liked the feeling of community she felt on the campus. But after interviewing for the Women’s Council Scholarship at The University of Mississippi, she changed her mind.

“I found the same type of community feeling within that program and it provided a lot of really great opportunities.” Of course, she admitted being a fan of the university’s athletic programs did not hurt her choice either!

As a new college student, Ally, like many students, did have to make some adjustments regarding time management and study skills. “In high school, you are in class all day, every day and you can sit, listen, and pick up information,” she says, “but in college, your classes are more spaced out and there is more information to digest.” She also mentioned how challenging it was to take 19 credit hours in her first semester, while also leaving time for her scholarship responsibilities and extra-curricular activities.

Ally always kept herself busy in high school by participating in a variety of extra-curricular activities and sports, but it sounds as though she is just as involved on the Ole Miss campus as well. In addition to being in the Honor’s College, she is a Women’s Council Scholar, a member of the Chancellor’s Leader-ship Council, and involved with Special Olympics.

“I really have enjoyed being involved with the Special Olympics and getting to participate in intramural sports with these kids, it is a really cool experience,” she adds.

So far, her favorite part of being a college student is learning. “I like learning, so I love sitting in classes and hearing new ideas,” she says. She especially enjoyed her political science class as the 2016 Presidential Election provided a lot of interesting material to discuss. “My professor was fun and created a good environment for us to discuss different ideas and beliefs.”

As Ally looks forward to her second semester at Ole Miss, she wants to continue to improve her experience as she moves forward. “If I could change anything,” she says, “I would not stress as much.”

She is also looking forward to exploring more of the opportunities the campus provides and focusing in on her interests and passions. Though just a freshman, Ally already has one eye looking to the future, as she is considering the Early-Entry Law Program provided by the Honor’s College, which would allow her to essentially begin law school during her senior year. She hopes to one day be an adoption attorney and is excited to pursue that goal.

When I asked her what advice she would give to current high school students looking towards college, she encouraged them to not be afraid to explore and meet new people. “Explore the background of what you think you want to do beforehand, and don’t be afraid to meet new people and experience new things,” she says. In terms of Ole Miss in particular, she said there were many people who told her if she did not rush a sorority she would not have an identity on campus, which she said was not completely untrue.

As she says, “It is okay to do something different, you don’t have to follow the crowd.” Her final encouragement to current students looking forward to college though, “enjoy the time you have, because it really does go by quickly!”

To close the interview, I asked Ally if there was anything else she wanted to say and without hesitation she offered up the following: “I am just so thankful for the encouragement and support from everybody, they all want to see me succeed and I am truly grateful for that!” While Ally is quick to thank others for her success, we should all be thankful to her as well. After all, she is the type of success story we can be proud of within our community. As she said herself, “If it takes a village to raise a child, that IS Water Valley.”

– Favorite movie of all time?

A novel I got for Christmas, it is Beauty and the Beast with a twist

– If you had to be an animal, which one would you choose?

You are going to laugh, but my favorite animal is a llama, and I don’t know why! I found a video of a llama in high school and have loved  them ever since!

– If you could be a participant/contender on a reality show, which one?

Family feud, but with other people, because my family has said they would not want me on their team for that show!

Backpacking through Europe, there are so many things I would want to see, I could not pinpoint one place.