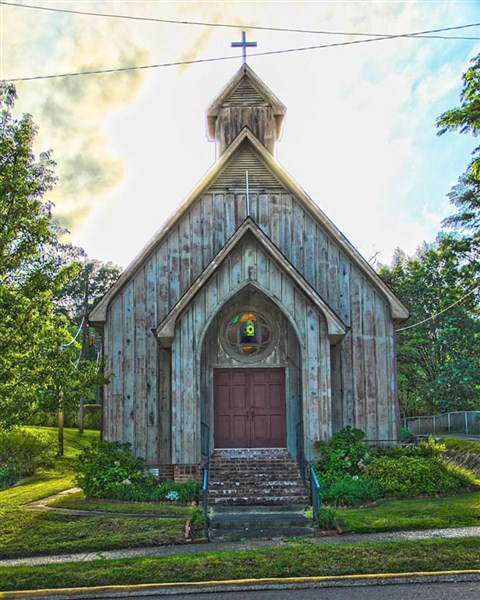 An interest meeting is scheduled Saturday as work gets underway for services to resume at the Episcopal Church of Nativity. The church is located on Main Street in Water Valley. – HDRI Photo by Leslie Brooks 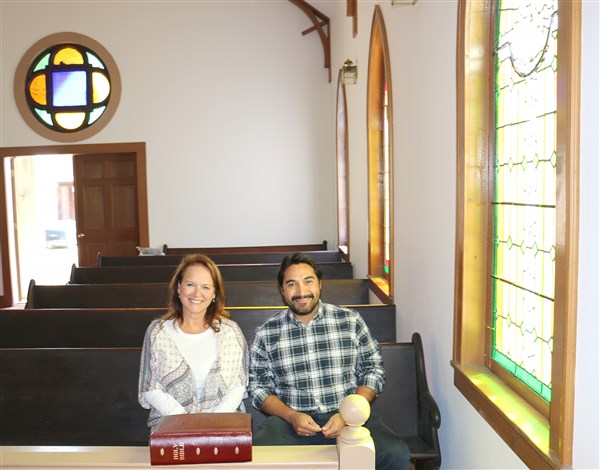 The interior of the Episcopal Church of Nativity in Water Valley is in surprisingly good condition after not being in use since 2004. Michael Howland (right) was appointed as Senior Warden for the church. Paige (Jones) Evans, a Water Valley native will serve as Junior Warden.

WATER VALLEY – After being shuttered for more than a decade, the Episcopal Church of Nativity in Water Valley will reopen this spring. An interest meeting is scheduled at the church on Saturday, February 18, at 10:30 a.m. and work will get underway shortly afterwards to prepare the church for services.

St. Peters Episcopal Church in Oxford will provide parochial support for at least the first year and possibly longer to assist during the startup, explained Rev. Jody Burnett, who serves as Rector at St. Peters.

Burnett said the plan is to have a weekly Saturday service in the afternoon or early evening at the Church of Nativity.

“Our clergy at St. Peters will alternate preaching and presiding at the weekly service.” Burnett added. “The overall objective is to work toward long-term sustainability and St. Peters needs to act as that support.”

Burnett also emphasized the goal is to start the ministry with a collaborative spirit in the community.

“We want to reach out to other churches, to be mutually involved and engaged with what’s going on in the community,” he explained. “The life that we share will be all over town and not just in the church.”

Michael Howland is the recently appointed Senior Warden for the church and has been working alongside Rev. Burnett for several months to restart services. He previously served on the Vestry of St. Peters and transferred his last year of Vestry to assist efforts to reopen the church. Howland also recently moved to Water Valley and is excited about the project.

“Once we have the meeting, it shouldn’t take long to turn around and start doing the cleanup. The church is in really good condition,” Howland reported.

Paige (Jones) Evans is the Junior Warden and attended services at the church before it closed. She was also part of earlier efforts to keep the church going as services became intermittent, starting in 2002. The church record shows a single service was held in 2003 and in 2004.

But Evans is confident the timing is right this time.

“This is another good thing about Water Valley right now. It’s very exciting that I get to say that,” Evans explained about the upbeat outlook for the town that sparked the renewed interest in the church.  “For a lot of years it was a selling job trying to explain the church would work,” Evans added.

Her sentiment is shared by Rev. Burnett.

“We are excited about it.  When you look at the growth patterns in Water Valley and the trajectory of what’s happening in Oxford and Water Valley, I think we are going to see more and more people moving to Water Valley,” Burnett said.

Howland added that the interest meeting will allow everyone interested to get a firsthand look at the work the building needs.

“This will allow them to get ownership of it and understand what it will take to make this viable,” Howland explained. Times will be also scheduled to start cleanup work at the church.

“We will also explain all the things that need to happen to make this a successful effort. We still have a lot of positions for people to step into to make things to function and grow,” he added.

The Church of the Nativity will be an established Mission in the Episcopal Diocese of Mississippi, according to Howland, and will have full representation in Diocesan affairs.  “The hope,” Howland added “is that in 18 months after we demonstrate growth and sustainability, we’ll be in a position to call our own Vicar.”

Burnett encouraged anyone that is interested to make plans to attend Saturday’s meeting.

“What we have to offer is a unique and important expression of faith, one that is open and inclusive, this will be an important option as Water Valley continues to grow. This is an exciting opportunity for people to get involved in a hands-on way. The Episcopal Church welcomes you,” Burnett said.